The breadth and reach of the OpenShift marketplace

In 2017, at a time when we are often drowning in data, we can still struggle to understand the dynamics of any given market. Sometimes this is because accounting guidelines prevent or discourage private or public companies from disclosing information. Other times the data is overly transparent, but it can also be meaningless without the proper context (e.g. GitHub stars). These are the intersections that we’re often facing with emerging technologies and open source communities.

[Q4, FY 2017] “with our largest deals in Q4 ... approximately one-third had an OpenShift container platform component.

A lot has evolved within the OpenShift Origin project and OpenShift Container Platform over the last couple years. The huge architectural shift that we made a few years ago in adopting open standards for containers and the Kubernetes container scheduler has allowed us to delivered a unified platform to containerize existing applications and deliver agility and scalability for cloud-native applications and microservices. We call this combination Enterprise Kubernetes+, or “Enterprise-Ready Kubernetes”.

So without any further delay, in the tradition of Red Hat’s culture of open communications, we want to give you a broader picture of the OpenShift ecosystem and marketplace, as we kick off Red Hat Summit 2017.

The Growth of Community

First, let’s start with the open source communities that help drive the technology and innovation around OpenShift. The are many upstream projects where Red Hat makes significant contributions, as well as integrations to deliver OpenShift. These include the Linux kernel, linux containers, runc, Kubernetes, Ansible, Open vSwitch, etc. 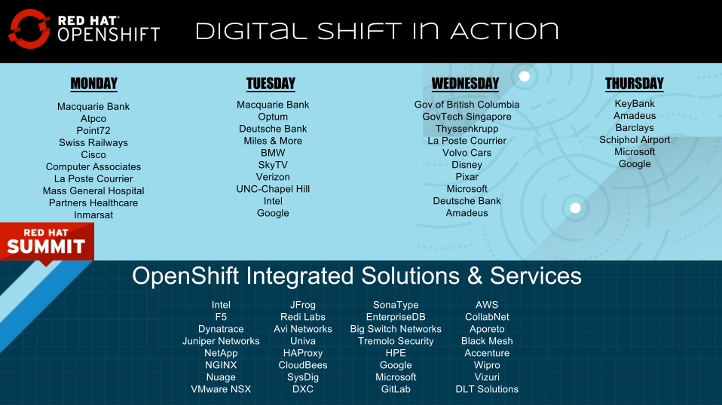 Before jumping into marketplace statistics, we thought it would be useful to showcase the business that are actively using OpenShift and are telling the world about how they deploy applications in newer, faster, and better ways to help improve their companies. While there are more than 80 sessions at Red Hat Summit which cover some aspect of OpenShift, there are more than 25 of them which have an OpenShift customer leading the discussion - they can all be seen here. The speakers are leaders in financial services, healthcare, automotive, government, education, technology, transportation, and telecommunications. They represent companies that are rapidly driving a digital transformation in their industries. We highlight some of their stories here, but you’ll be hearing many, many more of them this week in Boston. CIOs are already spending 18% of their budgets on digital transformation projects, with that number expected to grow to 28% by the end of 2018.

Now let’s talk about what’s happening in the marketplace.Nearly every aspect of your day-to-day life is impacted by an application running on the OpenShift platform. 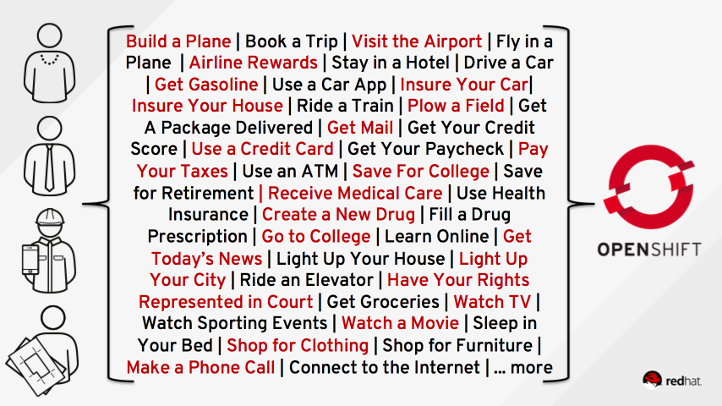 Containers in production in the enterprise are real, and they are real on Red Hat OpenShift.

The Acceleration of Entire Industries

While individual usage statistics are interesting, there is an even more interesting second-order effect that’s happening around industries that are deploying OpenShift. While each individual company must manage their own markets, none of them act independently. They are all part of a broader ecosystem of partner and suppliers, interconnected through complex supply-chains and business networks. When one part of the network goes faster, every other business must figure out how to match that pace or perish. 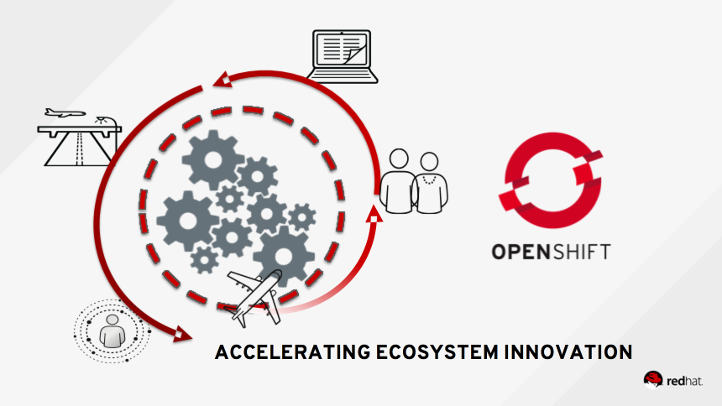 We call this the “Planes, Trains and Automobiles” phenomenon. At last year’s Red Hat Summit, we heard from airplane manufacturer Airbus about their DevOps journey, and digital travel platform Amadeus about their transformation of handling 2,000x the number of online transactions. This week’s Red Hat Summit and OpenShift Commons Gathering attendees will hear how Amsterdam’s Schipol Airport (AMS) is using OpenShift to redefine the in-terminal travel experience, how Miles & More GmbH is better managing rewards programs for travelers, and how ATPCO is rethinking how they publish fare-related data to the airline and travel industry. Stories like these extend to major hotel chains and global airlines as well. As a whole, they encompass the breadth of the travel industry, from suppliers to travelers to providers, all having to accelerate the pace of their business because all of the other moving pieces in the ecosystem are beginning to move faster too.

These accelerating centers of ecosystem gravity aren’t just in the travel and transportation industries. They are becoming more prevalent in financial services, education, government, healthcare and manufacturing. Today, we also announced that Barclays Bank, the Government of British Columbia's Office of the CIO, and Macquarie Bank are also using Red Hat OpenShift Container Platform to modernize application development. Later this week, during the Red Hat Summit keynotes, you’ll hear from even more customers using OpenShift in amazing ways. We’ll recap those stories in a future blog.

As OpenShift customers go public with stories about the business value they’re getting out of OpenShift, we expect that several of their competitors and suppliers may want to get onboard as well. It can become a force-multiplier effect, with known technology patterns and broad communities of engineering support.

As with any emerging market, there is a lot of hype and hyperbole about containers. This week, we’re at Red Hat Summit to show you that Red Hat’s commitment to delivering innovation and customer success with containers is second to none. The customer stories you’ve already seen today, and which you’ll see this week speak for themselves.

Containers in the enterprise are real, and they are real on Red Hat OpenShift.