Linux® containers make it easy to deploy and run your applications across different environments— from a developer’s laptop to production clusters. They decouple the upgrade and downgrade of applications from that of the servers on which they run, allowing systems administrators and developers to move at different speeds. Containers also provide transactional upgrades with all of the application dependencies, so if something does not work, it takes seconds to roll back (so no more eight-hour change windows starting at 2 a.m.) 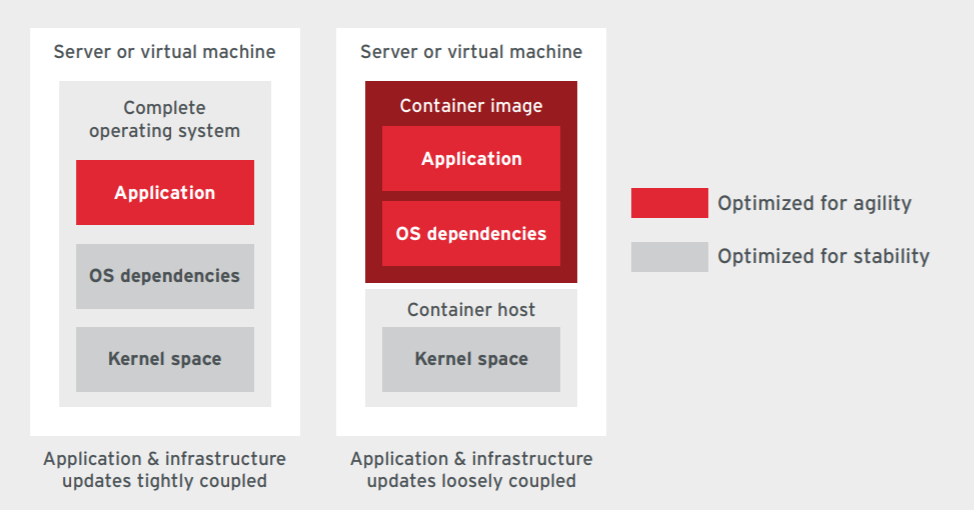 Figure 1. Infrastructure and application coupling before and after containers

Containers provide application portability. This gives teams better control over the time and place where they deploy code, but portability and compatibility are not the same thing. Development and operations teams can work at different speeds, upgrade and downgrade servers and applications independently of each other, and easily move applications between different environments, but the importance of performance, security, and compatibility between the container hosts and container images does not change. This paper will provide technical guidance on how to select the right container images and hosts for your applications.

Applications need language runtimes, interpreters, and libraries, so it is important to understand that the final container image that will be deployed in production is typically made up of multiple layers. The first image is called a base image, and it includes everything necessary to get started. Teams often work by building their own layers on these base images. Users can also build on more advanced application images, which not only have an operating system but also include language runtimes, debugging tools, and libraries.

Base images are built from the same utilities and libraries included in an operating system. A good base image provides a secure and stable platform on which to build applications. Red Hat provides base images for Red Hat® Enterprise Linux. These images can be used like a normal operating system. Users can customize them as necessary for their applications, installing packages and enabling services to start up just like a normal Red Hat Enterprise Linux Server.

Red Hat also provides more advanced application images that already include extra software. Examples include language runtimes, databases, middleware, storage, and independent software vendor (ISV) software. Software included in these images is tested, preconfigured and certified to work out of the box. These prebuilt images make it easy to deploy multitier applications from existing components without the work of building your own application images.

Figure 2. Typical roles and responsibilities for layers within a container image

Nor can you run ARM containers on x86_64 hosts. The same operating system rules apply. Containers are not like virtualization—they do not provide any kind of translation or guarantees that a binary can run on different platforms.

These inconsistencies can range from sporadic failure, which is hard to debug, to complete failure where the container will not run at all. Worse, incompatibilities can lead to performance degradation or security issues. Portability of Linux containers is not absolute—using different Linux distributions, or widely differing versions of the same Linux distribution, can lead to serious problems.

It is best practice to run a consistent version and distribution of Linux in all containers and on all container hosts in a particular cluster. This guarantees compatibility both horizontally and vertically. 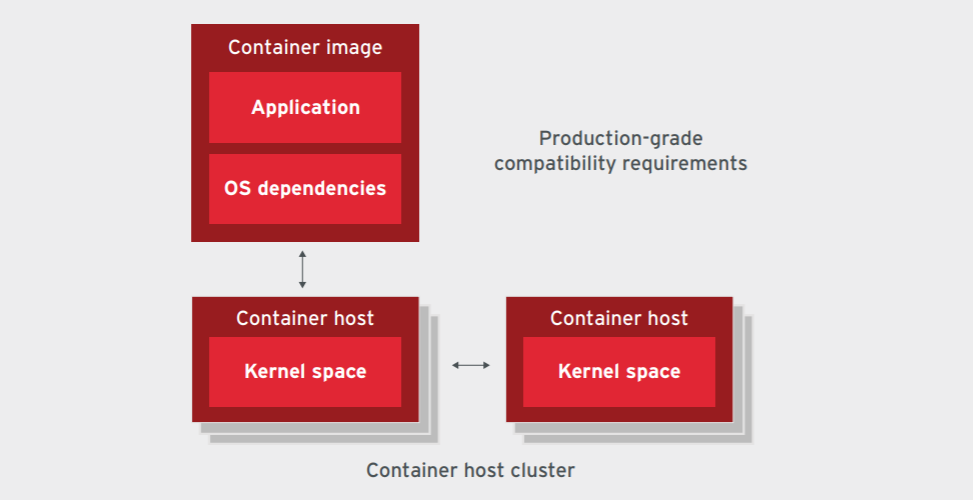 Complete portability of containers is critical when a container host or containerized process fails. Failed containers need to be restarted quickly on an alternate host. The risk of having a container fail to restart because of compatibility issues is increased when mixing and matching container hosts and container images based on different versions and different distributions of Linux. The worst time to find out about incompatibility problems is during a production outage.

To meet production-grade standards of compatibility, three specific requirements should be met:

Only when all of these requirements are met can the highest levels of portability be guaranteed. Red Hat only tests Red Hat-provided container images and container hosts together to maintain production-grade compatibility requirements. This is simplified by Red Hat’s API/ABI (application binary interface) guarantee, which becomes even more critical in a cloud environment.

Figure 4. Red Hat offers certified container images that are useable for all layers of your application containers

Red Hat offers a range of images for application development and deployment.

Base images built by Red Hat are a secure and stable foundation for your applications.

Intermediate images designed and built by Red Hat provide you with a preconfigured starting point to build your applications, allowing you to focus on your application instead of the infrastructure.

Application images designed and built by Red Hat help you quick-start your application by giving you access to prebuilt components, such as database, caches, ISV images, and more.

Applications are built on container images that provide the necessary language runtimes and libraries. These containerized application images are then turned into running containers, but they have to run on a host. Running containers are really just isolated processes utilizing kernel technologies, such as SELinux, cgroups, and namespace. These kernel technologies provide layers of security and performance isolation, but do not provide the same level of separation as virtualization. This means that the version and quality of the host kernel determines the security and performance of the containerized processes. It also means that the physical architecture of the underlying hardware determines which containers can be run on a host (x86, ARM, POWER, etc.).

A container host includes a tested and certified Linux kernel, a compatible container engine, and all of the libraries and tooling necessary to run, troubleshoot, diagnose, and resolve issues in a production environment—in short, end-to-end support. All of these factors should be considered when selecting the right container host for the environment.

Red Hat Enterprise Linux Server is designed as a general purpose operating system for all of your applications; some customers are running thousands of instances in production. Red Hat Enterprise Linux Server provides flexibility to configure each instance as necessary to support its workload. This flexibility comes at a cost. Since a wide variety of package combinations are possible, management is inherently different and handled with more traditional tools.

Red Hat Enterprise Linux Atomic Host is designed around a different deployment, operational, and management paradigm that makes it manageable at hyperscale. All Red Hat Enterprise Linux Atomic Hosts are designed to be configured upon deployment and managed identically as immutable hosts. It is designed to be easily configured with automation, which is useful in a completely ephemeral environment, such as private cloud, public cloud, or even as a virtual machine on a developer’s laptop.

Trusted storage components are particularly important for containerized applications that require access to persistent data. Integration, testing, and the ability to support the entire software stack, from container orchestration (Kubernetes) down to the container host kernel (Linux) is critical to ensuring data integrity and security.

Red Hat employs many of the key developers at each layer of our storage stack. We contribute directly to the upstream Kubernetes, Gluster, and Linux kernel communities (and many, many others), as well as capitalizing on that in-house expertise when designing, building, and maintaining our container hosts.

While containers create the appearance of virtualization-like isolation and compartmentalization, their dependencies on the underlying operating system and support profile are still similar to those of a conventional user application. For this reason, Red Hat supports Red Hat container images as applications, with all the usual support and certification requirements for the underlying container host. This protects Red Hat customers, ensuring that they can enjoy the same level of reliability, responsiveness, and support that they expect from a Red Hat product.

Customers who have a Red Hat Enterprise Linux subscription today already have access to supported and certified Linux container images. All official Red Hat images are delivered through the Red Hat Container Catalog, giving you:

Visit the Red Hat Container Catalog to learn more about all of the images provided by Red Hat: http://red.ht/2qrkW8K

Visit the Red Hat Developers site to get started with a no-cost developer subscription: http://red.ht/2qkiM7H