With the growing embrace of containers and Kubernetes orchestration, container-native object storage is now particularly vital technology for diverse applications. As applications move to the cloud, persistent data storage is an important factor in cloud-based application scalability, performance, and reliability. Solutions must be able to scale rapidly to support enormous numbers of objects with predictable performance, and they must be able to keep vital applications and services running during planned and unforeseen failure events.

With these challenges in mind, Red Hat recently engaged Evaluator Group to test the scale and performance of a system designed to store over 10 billion objects running on Red Hat® Ceph® Storage. Scaling to 10 billion objects is a monumental undertaking that requires highly capable hardware, a balanced configuration, and a software environment that can scale and recover from failure without placing arbitrary limitations on performance. The tested configuration included Intel and Seagate technology:

One of the principal advantages of software-defined Red Hat Ceph Storage is that it can be deployed on industry-standard servers with storage tailored to provide appropriate capacity and performance profiles for a given workload. The Evaluator Group project sought to configure and test a Red Hat Ceph Storage cluster capable of ingesting, storing, and serving 10 billion small objects with deterministic performance. Testing was conducted in Evaluator Group labs using equipment from Intel and Seagate. Table 1 details the test configuration used by Evaluator Group, with key Intel and Seagate technologies described in the sections that follow.

Red Hat Ceph Storage was configured using an erasure coded object pool, offering fault tolerance while maximizing storage capacity. Erasure coding (4+2) represented a particularly good fit for the six-node configuration as it supported the loss of up to two nodes or multiple devices across multiple nodes.1

PUT operations (writes) are necessarily more expensive in terms of input/output (I/O) operations than GET operations (reads). With 4+2 erasure coding, every 64KB object was split into four chunks of 16KB each and stored along with two 16KB of parity. As a result, every object stored required six I/O operations for every PUT operation.

Figure 1 shows the small-object workload performance for PUTs (writes) and GETs (reads) as the object count scaled to 10 billion objects. As shown in the chart, there was a brief, significant drop in both PUT and GET performance after approximately 500 million objects. This was attributed to Ceph initiating a “deep scrubbing” operation due to the very high PUT rates. Red Hat Ceph Storage was reconfigured to decrease the rate of deep scrubbing and performance quickly returned to normal. GET operation performance began to degrade only after the metadata cache capacity was reached and the cluster’s usable capacity surpassed 80%. At this point metadata increasingly spilled over from fast Intel SSD DC P4610s to slower HDDs. 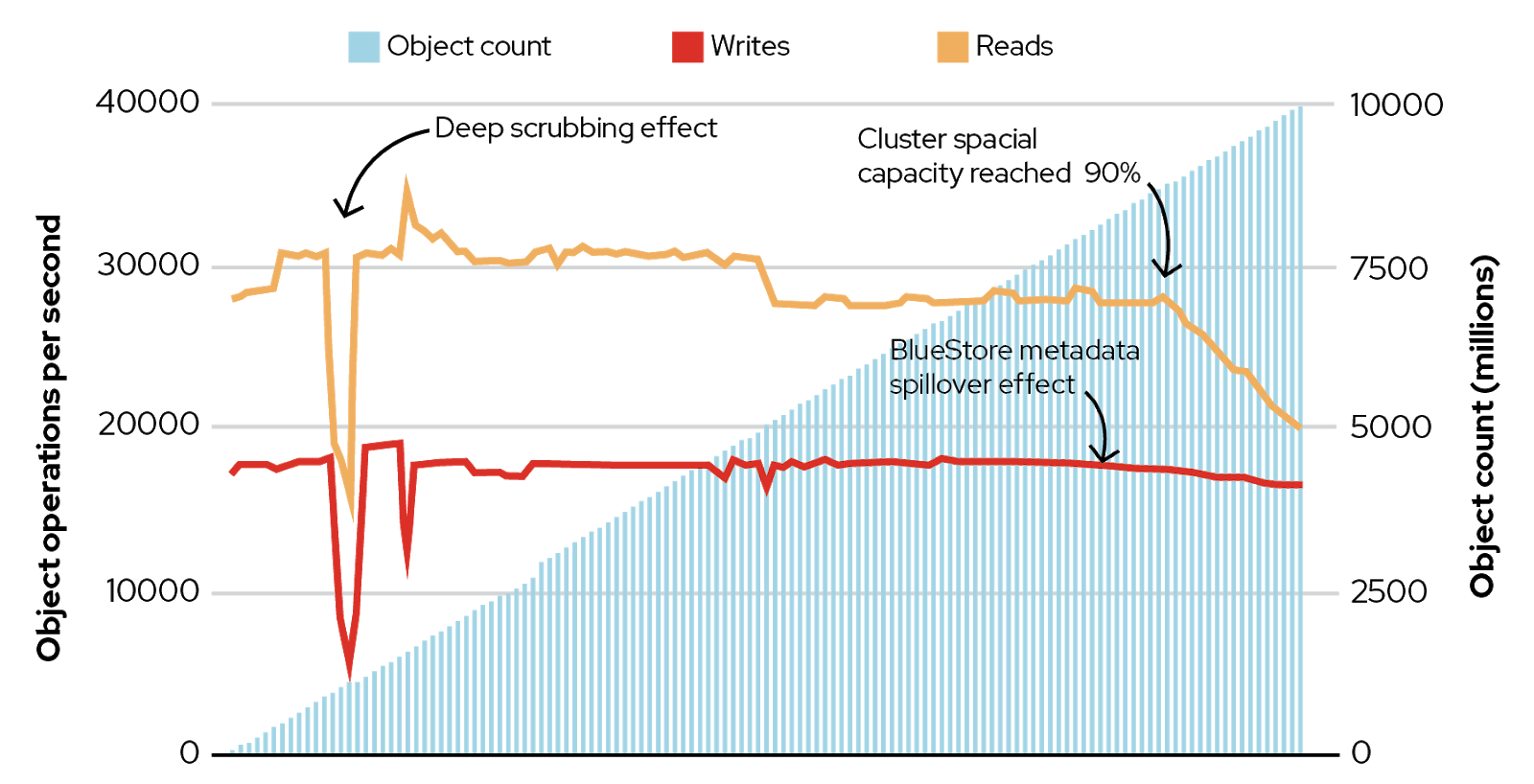 Figure 1. Object count vs. operations per second for up to 10 billion small objects

The primary consideration for this testing was read/write performance for small 64K objects in terms of objects per second, and the system was optimized accordingly. However, engineers also wanted to evaluate throughput using larger (128MB) objects that are representative of big data workloads such as MapReduce, Spark, and Presto. Testing, again, utilized workloads with multiple operation types that were run repeatedly as the system capacity increased to over 80% utilization.

As with the small-object testing, 12 COSbench clients were employed, with each using a dedicated Ceph RGW interface, including:

As shown in Figure 2, Red Hat Ceph Storage demonstrated deterministic performance of more than 10GB/s for both GET and PUT operations—with almost no variation as the system filled to 80% of its capacity. Because the testing involved fewer large objects, it generated less metadata and there was no noticeable spill-over from the Intel SSD DC P4610s to HDDs. Importantly, the system was optimized for small objects, not large objects, with network bandwidth limited to 50Gb/s per node and a server-to-storage bandwidth limitation of 48 Gb/s over a single SAS connector. Engineers anticipate overall object throughput rates could have been higher without these limitations. 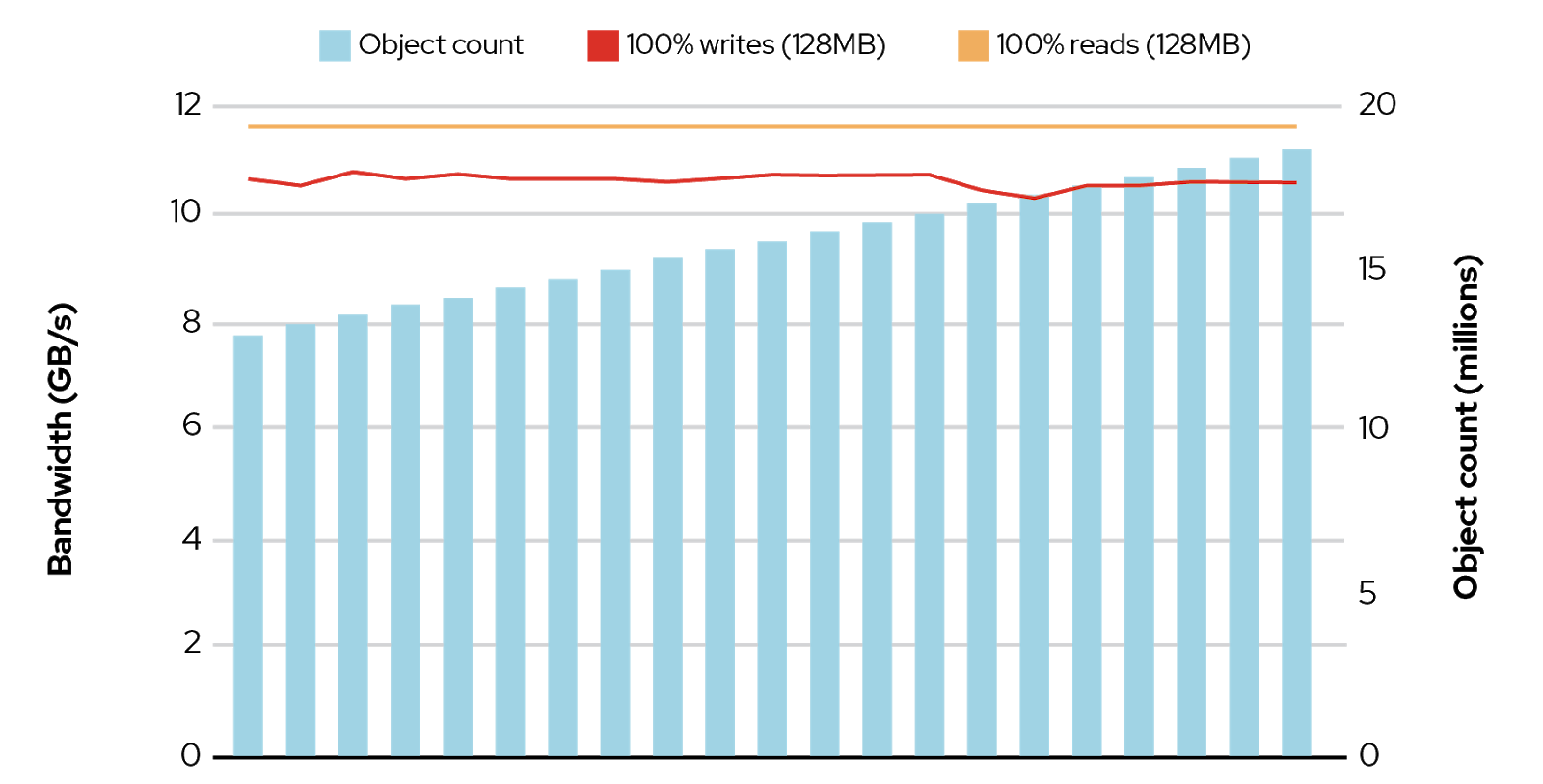 Any storage cluster designed to ingest and serve billions of objects is a vital resource that must be highly available. While the Seagate Exos E 4U106 enclosures feature hot-swap disk drives, power supplies, fans, and SAS expander modules, Red Hat engineers sought to evaluate performance under failover conditions, using the erasure coded (4+2) data protection inherent to the tested configuration. As shown in Figure 3, under the small object workload, operations per second continued at a high level even when six individual HDDs in a single enclosure were artificially failed within the cluster. 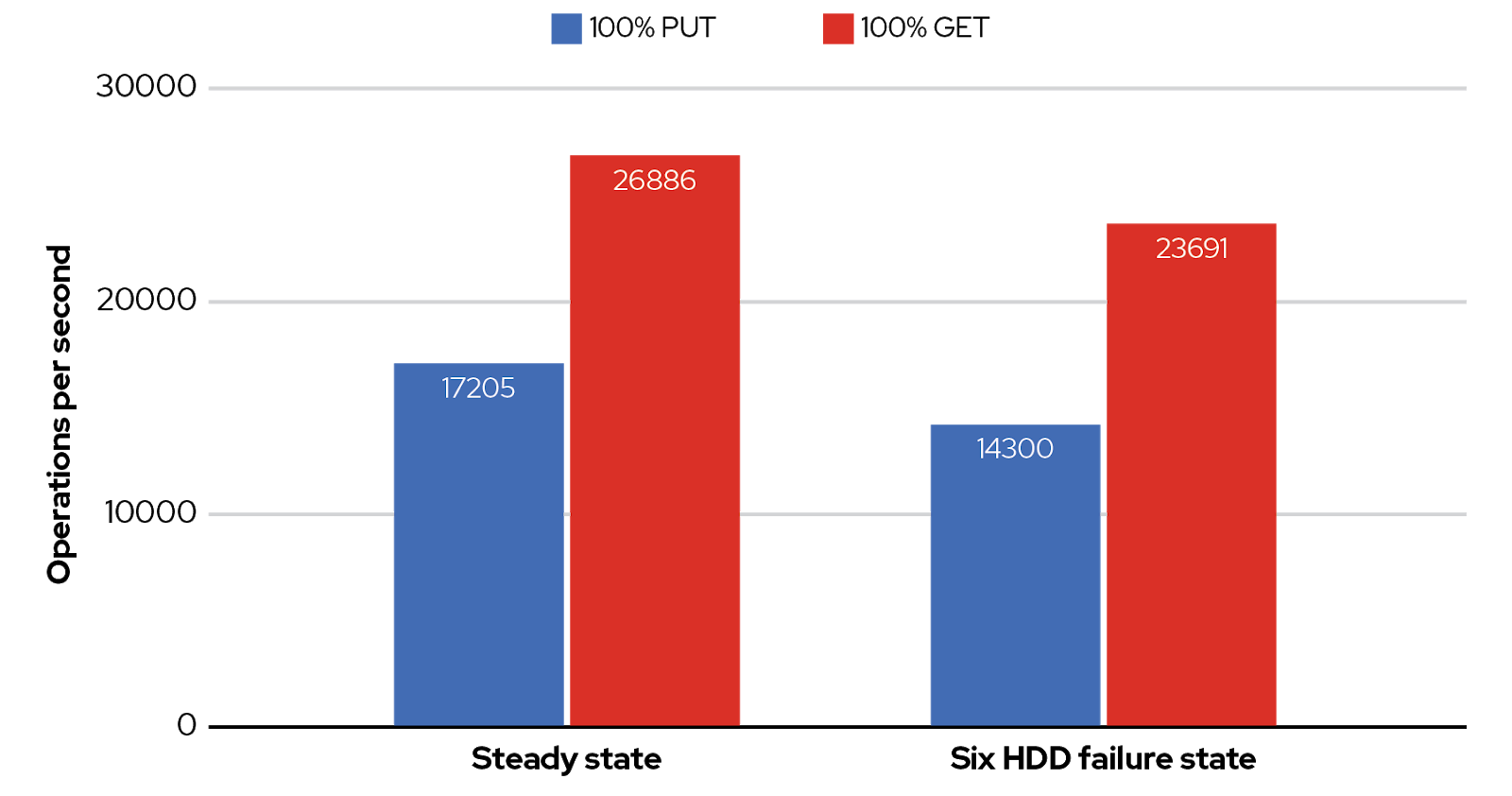 In addition to individual HDD failures, engineers also recorded bandwidth during degraded state operation with failure of a full Red Hat Ceph Storage node, taking 53 HDDs out of the cluster. Figure 4 shows throughput for the large-object workload, considering steady state operation as well as failure of six individual disks and an entire Red Hat Ceph Storage node. The results demonstrated that the cluster was resilient to both device and node failure, allowing processing to continue at a high level, even under failure conditions. 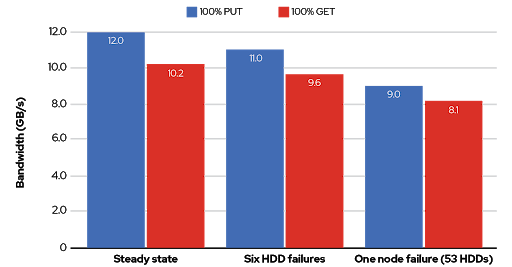