Within the next 12 months,
61% of organizations are
planning to use edge
computing and Internet of
Things (IoT) technologies
separately or in combination.1

The edge spans many locations, each with different needs

Intelligent applications can help you deliver high-value, differentiated experiences to better connect with your customers and partners. These applications often require fast, secure access to data and compute resources. As a result, many organizations are deploying applications and workloads at the edge to reduce latency, trim costs, and gain faster insights.

Edge computing shifts compute processes from the datacenter to endpoints at remote locations. It is often used for latency-sensitive applications, applications that must run in locations that are periodically disconnected from central datacenters, and situations when regulatory and compliance requirements limit where data may travel and reside.

Red Hat views edge computing as a natural extension of hybrid cloud environments, operations, and strategies. Incorporating edge deployments into hybrid cloud environments can provide end-to-end consistency, simplified management, and immense scalability. You can operate and administer your entire environment — from core to edge — in the same manner to streamline development, deployment, and management. A hybrid cloud approach that includes edge computing can also help you develop and implement security processes and tools to protect your applications, infrastructure, and business across all locations.

The edge is not a single, defined location — there are many different edge tiers, each with different properties and requirements. For example, edge locations vary in physical size, available power and cooling capabilities, and network connectivity. They can also vary in the number of staff and staff skills available on-site. In general, as you move further out from your core datacenter, the latency in communication between edge and core locations increases. As a result, each edge deployment is unique.

Red Hat takes an open approach to deliver the capabilities, flexibility, and expertise needed to make your edge implementation successful. We offer integrated platforms and tools that let you consistently and efficiently deploy, manage, and protect workloads at scale from your core to any edge. Plus, our certified partner ecosystem lets you deploy the third-party hardware, software, and solutions your business requires with confidence, so you can build complete edge stacks and solutions.

Organizations can use edge
computing for many uses and
applications. Examples include:

Figure 1. The edge spans many locations and tiers to meet a variety of use cases.

Together, Red Hat® platforms and technologies form a common, flexible, scalable foundation that works across your entire hybrid cloud and edge environment. Key benefits include:

To meet the varying physical space, power, cooling, and connection constraints of edge locations, Red Hat solutions, based on Red Hat OpenShift®, can be deployed in three edge topology options: three-node clusters, remote worker nodes, and single node edge servers. These topologies give you all of the capabilities of a full Kubernetes platform in lower cost, smaller footprint options that let you deploy and manage applications consistently across edge tiers. Each one connects to your central datacenter control plane for unified management via Red Hat Advanced Cluster Management for Kubernetes. All topologies also include Red Hat Advanced Cluster Security for Kubernetes to protect your applications and infrastructure. Each topology can address a variety of edge use cases, and you can mix and match topologies and move applications and data across edge tiers and locations to meet your needs over time.

Together, Red Hat products
and technologies form a
common, flexible, scalable
foundation that works across
your entire hybrid cloud
and edge environment. 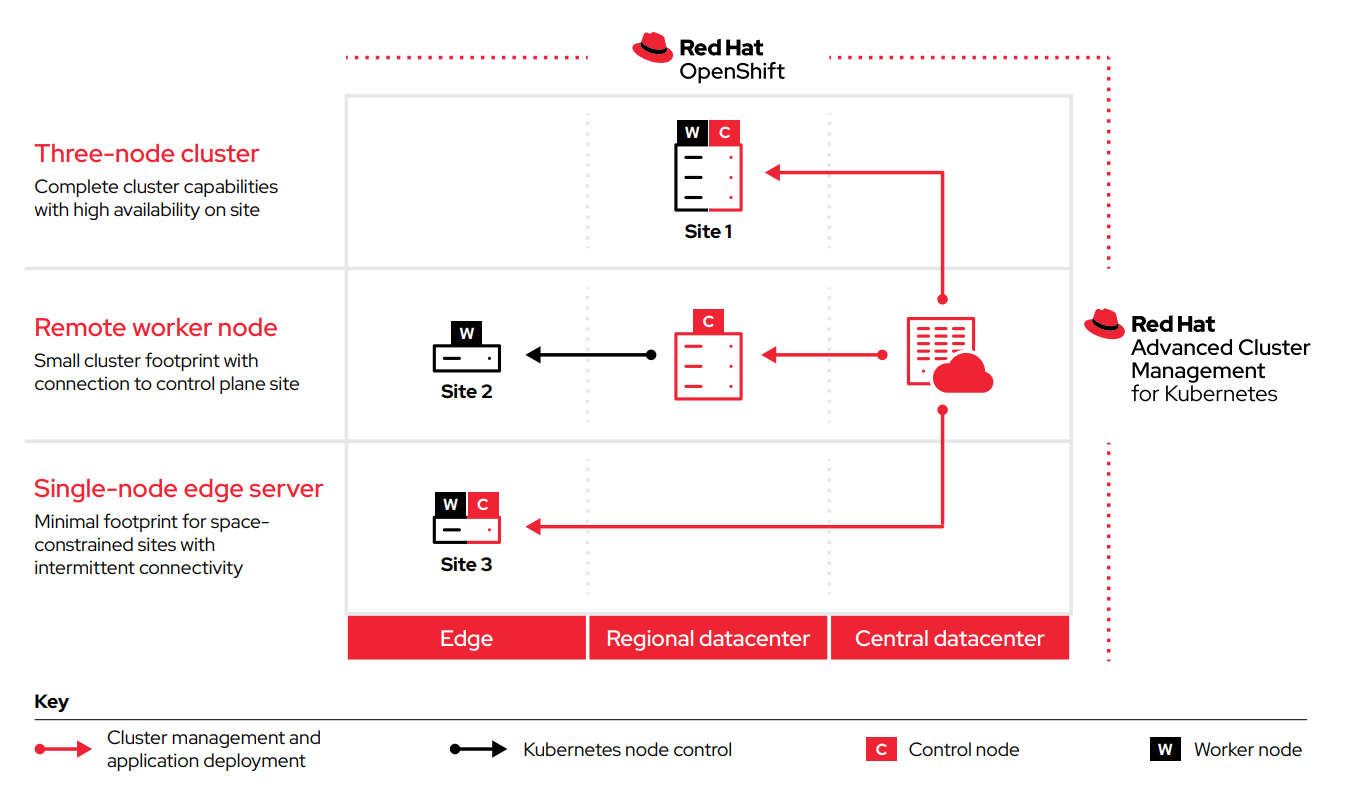 Benefits of the three-node cluster topology:

Opt for the three-node cluster topology when you need complete cluster capabilities with high availability on-site. Because this topology creates a complete functional cluster, you can also deploy it at locations with intermittent or low-bandwidth connections to your core datacenter. This topology is often used for regional datacenters and locations.

Choose the remote worker node topology when you have very limited space at your edge sites, but still have a strong, stable connection to your control plane site.

The single-node edge server topology creates a fully functional Red Hat OpenShift deployment on a single server that acts as both a control plane and a worker node. In this topology, Red Hat OpenShift addresses the hardware of only one server and runs on bare metal, providing extremely high performance and efficiency. Single-node edge servers can connect to your central management cluster for unified administration. If the connection between your edge site and core fails, single-node edge clusters continue to operate and manage themselves independent of your central management cluster.

You can deploy single-node edge servers manually or use the zero-touch provisioning capabilities of Red Hat Advanced Cluster Management with an assisted installer.

Select the single-node edge server topology when your edge site is very space-constrained or when there is limited bandwidth or intermittent connectivity between your edge and core datacenter sites.

To help you deploy applications at the edge faster and more easily, Red Hat offers validated deployment patterns. These patterns are detailed deployments created for different edge use cases. Predefined configurations bring together the Red Hat portfolio and technology ecosystem to help you rapidly implement your edge architecture. Validated patterns provide a foundational architecture that you can customize to meet your organization’s needs.

Red Hat validated patterns contain all of the code needed to build a proof-of-concept edge stack. All steps are fully automated via GitOps processes so you can deploy consistently and at scale. Finally, these patterns are continuously updated and tested against current product releases to reduce risk and deliver the latest capabilities.

Learn more about validated patterns for edge at redhat.com/en/products/edge/validated-patterns.

Build a consistent, flexible foundation for your edge environments

Each edge environment is different. Red Hat provides a portfolio of integrated platforms and tools to help you build the right foundation for your edge use case.

Red Hat can help you extend your business to the edge with platforms and tools that deliver consistency, manageability, automation, and simplicity across your entire environment. We also continue to work to meet the evolving needs of edge deployments.

Learn how you can gain more choice and flexibility at the edge: redhat.com/en/technologies/ cloud-computing/openshift/edge-computing