As the leader of a Java™ organization, you struggle to deliver business value and innovation to market faster than your competition. Your application development teams must meet strict, diverse requirements while improving efficiency and decreasing costs. To keep up with today’s pace, your organization has to deliver new applications and updates in days or weeks—not months. But speedy delivery of new features is not the only requirement. Applications must also be reliable, perform smoothly at large scale with millions of connections, and meet strict security and compliance expectations.

Successful leaders are turning to DevOps methodologies, microservices architectures, and containers to accelerate application development and delivery, maintain high levels of quality and reliability, and achieve technical flexibility. To support these new approaches, you must choose a platform flexible enough to meet diverse application needs. The right platform can help you:

JBoss EAP helps deliver business value more quickly and with greater flexibility, resulting in lower costs, fast and easy scale out, and reduced IT complexity. Organizations moving to JBoss EAP have achieved 509% return on investment over three years, while developing 70% more applications per year with 35.5% less developer hours per application. 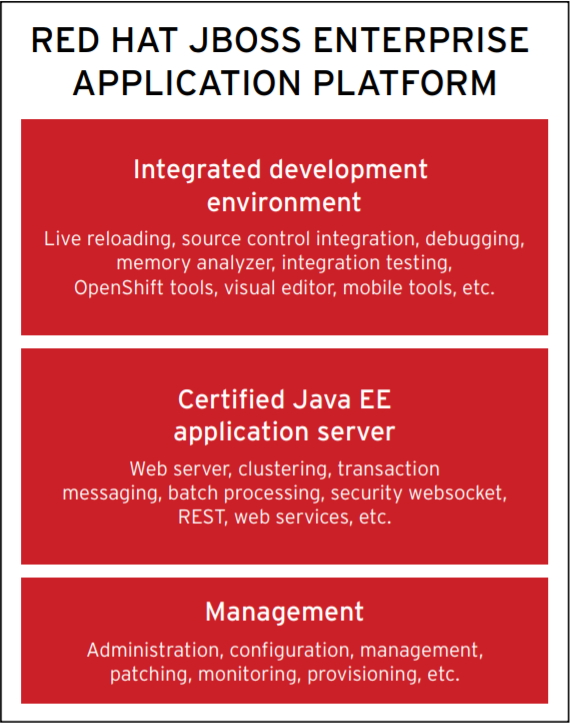 “A crucial factor in our decision to choose Red Hat JBoss EAP was the desire to standardize application development. Previously, it was carried out on servers and clients with a variety of different tools. This multilayered, distributed system allows us to operate in a noticeably more efficient manner and simplifies all of our management processes.”

ONE PLATFORM FOR ALL YOUR NEEDS

A fully certified Java EE 7 application platform, JBoss EAP is based on flexible, modular architecture with services-driven components and is ready for deployment in cloud environments. The platform offers powerful management and automation for greater developer productivity and is based on the open source Wildfly project (formerly known as JBoss Application Server). JBoss EAP features include:

JBoss EAP has everything you need to build, run, deploy, and manage enterprise Java applications in any environment, including across hybrid cloud environments. It supports a wide range of application requirements, as well as integration with a variety of standards, and is completely open source. This provides technical flexibility and helps you avoid switching costs related to vendor lock-in.

Try Red Hat JBoss Enterprise Application Platform on OpenShift Online. Discover the benefits of developing Java EE applications in a Platform-asa-Service (PaaS) environment. Leave provisioning, management, and scaling behind and focus on the important work— writing code for your next big Java application.

JBoss EAP allows you to use the same code base to deploy Java applications in different environments, including:

JBoss EAP is well-suited for microservices, as well as traditional applications. This provides the flexibility to build applications as they are needed.

JBoss EAP helps you combine, improve, and extend your Java EE applications with the full benefits of cloud and container environments. JBoss EAP is: 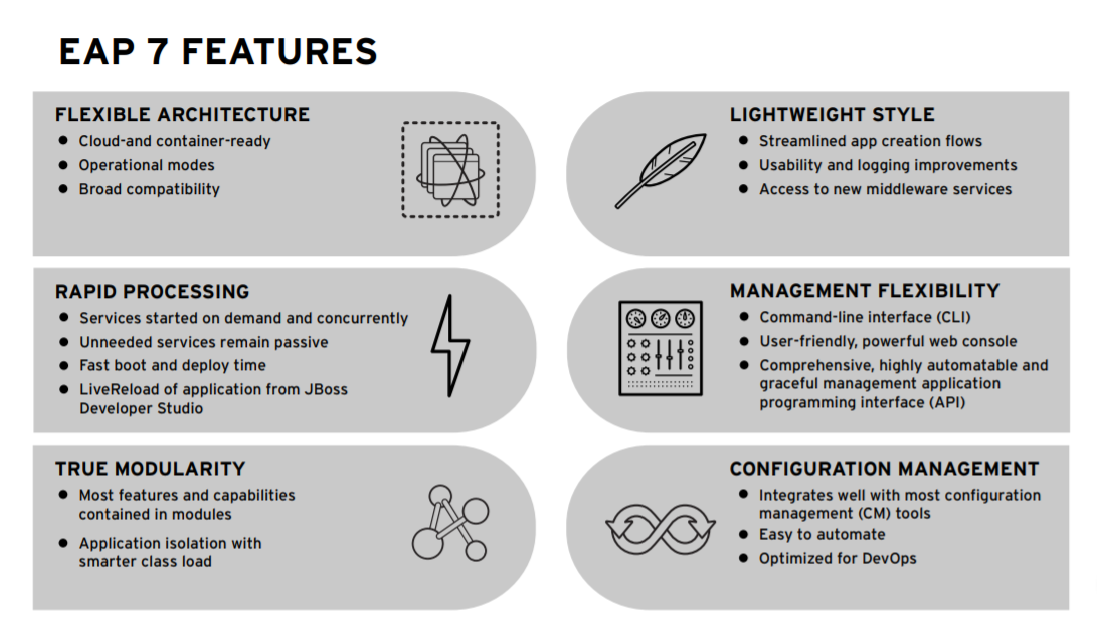 Download Red Hat JBoss Enterprise Application Platform. All of our products are open source, which means you can install them, run a demo, and develop a proof-ofconcept. Eliminate risk by trying the software before you buy.

Explore a rich library of resources. Get up to speed fast by viewing a webinar, trying out a tutorial, or watching a demo.

RUN JBOSS EAP IN THE CLOUD VIA RED HAT OPENSHIFT

When you deploy Red Hat JBoss Enterprise Application Platform into Red Hat OpenShift environments, you gain full Java EE capabilities in both private and public cloud environments. Since you don’t have to create or maintain the development environment, you can prototype ideas quickly and take successful ones to market faster.

ARCHITECTURE FOR CLOUD, MICROSERVICES, AND CONTAINERS

Red Hat JBoss Enterprise Application Platform 7 builds on the foundation created by JBoss EAP 6, offering a modular, lightweight stack that can be deployed in any environment. It meets requirements that span from traditional applications to new web-scale, microservices apps, giving organizations that standardize on JBoss EAP the flexibility needed to build applications that fit their business needs.1

In addition, management using the updated command-line interface (CLI) provides administrators with a quick, unified view into configurations and subsystems and offers the ability to manage servers offline. The CLI can be used with popular configuration management tools such as Red Hat Ansible Tower or Puppet. Together, the management console and CLI make editing XML configuration files unnecessary. With JBoss EAP, administrators can now perform minimally disruptive maintenance using the new server suspend mode to gracefully shut down servers. 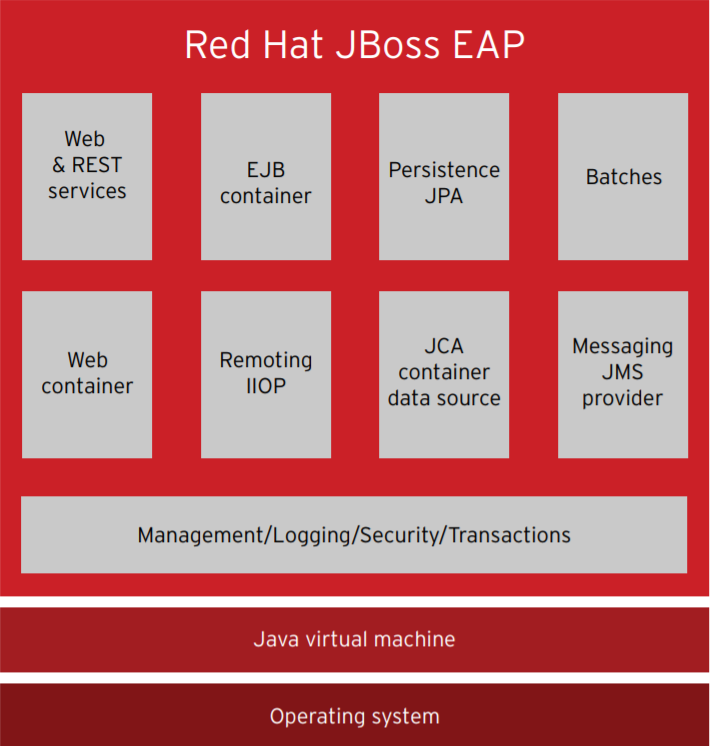 Meet a diverse range of Java application requirements with a combination of Java EE 7 compliance, integration with the latest open standards, and the addition of enterprise capabilities such as failover, high-availability clustering, distributed caching, intelligent load balancing, and distributed deployment.

Maximize throughput and scalability for environments with millions of connections with Undertow, a highly scalable, non-blocking I/O (NIO) modern web server. Undertow can also be configured to function as a multiplatform load balancer.

Reduce latency and improve load times with support for HTTP/2 standards (technical preview for JBoss EAP 7), which compresses headers and multiplexes data streams over a single Transmission Control Protocol (TCP) connection. HTTP/2 also allows servers to push resources to the client before it has requested them, leading to faster page loads.

Trends like big data, Internet of Things (IoT), and mobile require developers to respond and adjust faster than ever before. JBoss EAP supports developer productivity by integrating with common DevOps tools, letting you maximize development and operations teams’ productivity, decrease quality issues, and get new apps to market fast. JBoss EAP helps you:

Other supported standards include: 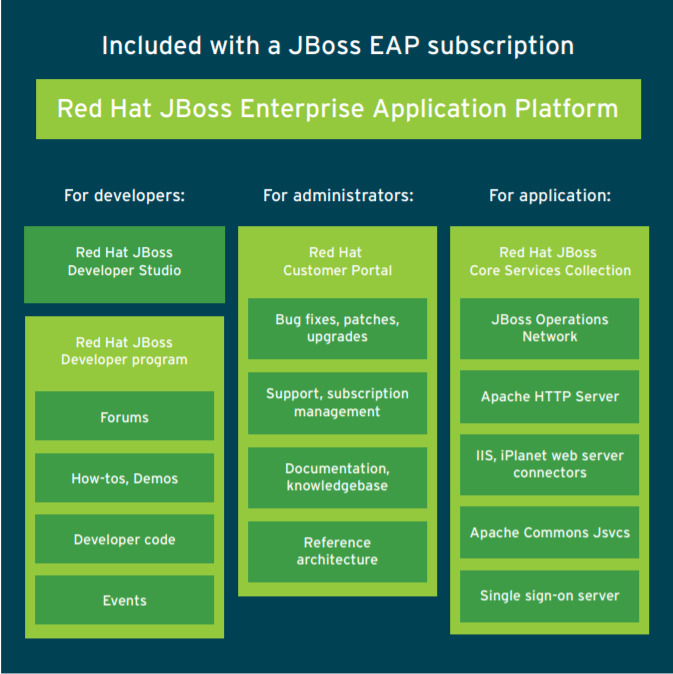 A JBoss EAP subscription is more than just support for an application server—it gives you everything you need to develop, build, test, deploy, and maintain your enterprise Java applications. A subscription to JBoss EAP:

There is no need to buy multiple subscriptions to build and test on Red Hat Middleware products or pay production service-level agreements (SLAs) to get support. It’s all included.

Red Hat can help you make the move from IBM WebSphere or Oracle WebLogic application servers to JBoss EAP. Red Hat Consulting has a full complement of migration engagements, including methodology, tooling, and migration factory services.

FROM OLDER VERSIONS OF JBOSS EAP

Delivering the level of innovation and productivity your customers demand continues to challenge even the most efficient developers. To meet these demands, you need an application development platform that can support your on-premise infrastructure and the additions you make to it in the future.

Red Hat is a vendor proven to provide enterprises with the engineering and support they need. JBoss EAP pushes beyond the Java EE spec to offer additional enhancements focused on developer-friendliness and high productivity. The platform helps you modernize application delivery, standardize across on-premise and cloud architectures, and work seamlessly with the latest developer tooling and DevOps practices. An infrastructure based on JBoss EAP lets you keep pace with new cloud architectures and microservices-based processes. This gives your modern enterprise the flexibility, agility, and speed to deliver innovative applications to market faster.