Day two at Summit began with an appeal that may sound surprising, even strange, to some: embrace chaos and drop the notion that success only stems from years of planning and organizing. The world of open source is one of the best proponents of this line of thinking, touting the principles of release early and often, fail fast, and a plea to try, learn, and modify systems. As Jim Whitehurst, president and CEO of Red Hat stated during this morning’s general session, “we always wanted to assume that there was more order in the world than there really is,” in reference to successful tech organizations.

The phrase “digital transformation” is everywhere in the tech world. It’s what all businesses—no matter their size or industry—are trying to do if they want to stay competitive in the market today. Eric D. Schabell, global technology evangelist at Red Hat, walked through the foundations of digital transformation as it relates to enterprises. 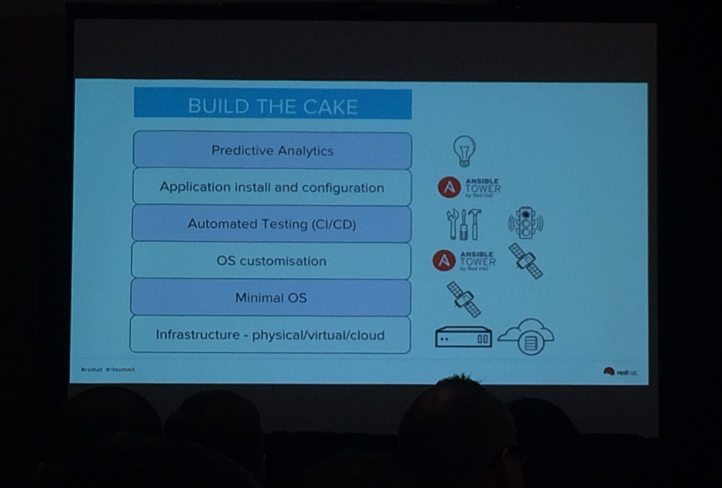 Support is needed for break-fix scenarios. Many teams spend too much of their time dealing with projects as they arise and keep growing, with no centralized ticketing system. His suggestion? “Building the cake,” or, creating a stack of support tools that include:

The “sprinkles,” or extra layers of support Griffiths recommends, is Red Hat Insights, which finds two things for customers. First, it can solve critical issues on an application server. Second, the more systems you throw in it, the better output you get. When 90 percent of your systems are affected by one issue, you can fix that issue, automate the solution, and confidently move forward with other more strategic tasks.

Lastly, San Antonio-based managed cloud provider Rackspace chose OpenStack because of the customization you can build on it, and because it optimizes the infrastructure you’re using. Daniel Sheppard, product manager of Rackspace Private Cloud Powered by Red Hat at Rackspace shared that people were constantly coming to them with legacy virtualization seeking the “DevOps utopia” they keep hearing about.

With OpenStack, Rackspace can deploy infrastructure like it’s code, and the infrastructure is one that rapidly expands to meet customer requirements. “What we hear from customers is that OpenStack lowers the number of engineers involved,” Sheppard said. When their customers have more nodes, they have more private clouds. As the number of nodes go up, they see cost savings. Sheppard asked customers what they saved, and the average number is around $600,000 in savings over a 60 node deployment annually. This result is compelling when customers ask how they can maximize their investment when using OpenStack. Rackspace is closely tracking the benefits customers have seen by using OpenStack, and expects these numbers to continue growing over the years to come.