sVirt delivers the industry’s
most secure virtualization
platform in an easily
administered solution.

Virtualization has revolutionized the way organizations in every industry, agency, and government deploy and manage software. Whether executed on a datacenter, cloud, or a mobile platform, virtualization’s flexible application deployment improves the automation, scalability, and uptime of limited resources — improving the efficiency of hardware, space, power, and cooling.

While many virtual machine (VM) technologies offer these benefits, not every option is developed specifically to reduce administrative burdens and security threat vectors that are native to the virtual environment.

sVirt, an alternative to proprietary virtualization solutions, provides a powerful, proven, and easily administered technology with:

Virtual environment threats can escalate quickly. A single compromised application running with a VM can scale to a hypervisor-level, physical machine, or multi-VM threat. These include:

sVirt was developed in partnership with the NSA and the open source community as one of the industry’s most secure virtualization products. sVirt pairs kernel-level architecture with the NSA’s SELinux mechanism, which has been an important component of Red Hat Enterprise Linux since version 4. SELinux isolates each VM as a protected process so every system resource — from processes and data files to devices and memory — can be labeled and prescribed access rules based on user types.

Red Hat’s virtualization architecture (Figure 1) treats each VM as its own process managed by a kernel-level hypervisor. Because each VM is a process, it can be labeled by SELinux, effectively establishing a security boundary around each VM. Monitored and enforced by the kernel, this security restricts the VM’s access to resources outside its boundary, such as host machine data files or other VMs. 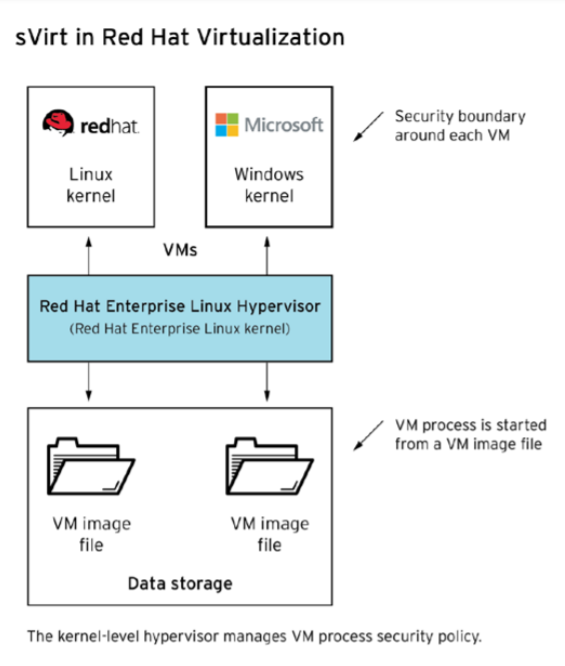 Administrative errors are a leading cause of security holes in virtual environments. sVirt extends the SELinux labeling scheme to VMs, thereby using SELinux’s proven capabilities and providing additional important benefits for security administration. sVirt dynamically labels the VM processes according to the policy established on the file images (Figure 2), ensuring processes do not access resources outside themselves. These process labels are applied automatically and dynamically, eliminating administrative burdens of manually labeling resources and enabling an entirely policy-driven security solution. 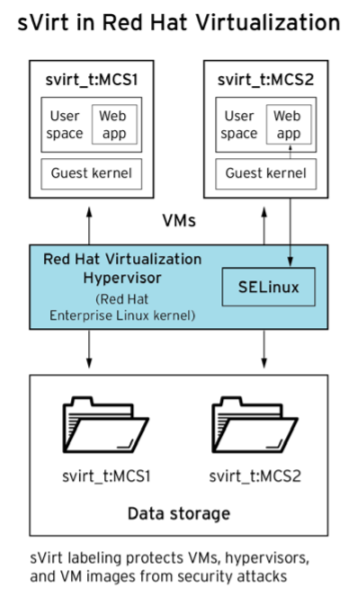 All sVirt features and protections are available to VMs regardless of the guest OS. The product integrates with Linux or Windows VMs and includes the advanced SELinux feature if the guest OS is Red Hat Enterprise Linux.

Managed by a kernel-level hypervisor, the boundaries are monitored and enforced by the kernel itself. Built from the ground up on the Linux kernel, sVirt is easily implemented — simply enable the Kernel-Based Hypervisor (KVM) kernel module in the host machine to activate Red Hat Virtualization and sVirt. After VM image files are created and labeled, sVirt automatically coordinates the boundary process to protect the host, hypervisor, and other VMs.

WHERE TO GET RED HAT SECURE VIRTUALIZATION