Give data scientists and data analytics teams access to their own clusters without the unnecessary cost and complexity of duplicating Hadoop Distributed File System (HDFS) datasets.

Use space-efficient erasure coding for data protection, saving up to 50% of percluster storage costs over 3x replication.

Traditional data analytics infrastructure is under stress due to the enormous volume of captured data and the need to share finite resources among teams of data scientists and data analysts. New technology and computing capabilities have created a revolution in the amounts of data that can be retained and in the kinds of insights that can be garnered. However, divergent objectives have emerged between teams who want their own dedicated clusters, and the underlying data platform teams who would prefer shared datacenter infrastructure. In response, some data platform teams are offering teams their own Apache Hadoop Distributed File System (HDFS) clusters. Unfortunately, this approach results in expensive duplication of large datasets to each individual cluster, as HDFS is not traditionally shared between different clusters.

Based on the pioneering success of these efforts, Red Hat, Quanta Cloud Technology (QCT), and Intel Corporation sought to quantify the performance and cost ramifications of decoupling compute from storage for big data analytics infrastructure. They were aided by the S3-compatible Hadoop S3A filesystem client connector that can be used with an S3-compatible object store to augment or replace HDFS. Using a shared data lake concept based on Red Hat Ceph Storage, compute workloads and storage can be independently managed and scaled, providing multitenant workload isolation with a shared data context.

After conversations with more than 30 companies, Red Hat identified a host of issues with sharing large analytics clusters. Teams are frequently frustrated because someone else’s job prevents their job from finishing on time, potentially impacting service-level agreements (SLAs). Moreover, some teams want the stability of older analytics tool versions on their clusters, whereas their peers might need to load the latest and greatest tool releases. As a result, many teams demand their own separate and specifically tailored analytics cluster so that their jobs are not competing for resources with other teams.

With traditional Hadoop, each separate analytics cluster typically has its own dedicated HDFS datastore. To provide access to the same data for different Hadoop/HDFS clusters, the platform team frequently must copy very large datasets between the clusters, trying to keep them consistent and up-to-date. As a result, companies maintain many separate, fixed analytics clusters (more than 50 in one company Red Hat interviewed2), each with its own redundant data copy in HDFS containing potentially petabytes of data. Keeping datasets updated between clusters requires an error-prone maze of scripts. The cost of maintaining 5, 10, or 20 copies of multipetabyte datasets on the various clusters is prohibitive to many companies in terms of capital expenses (CapEx) and operating expenses (OpEx).

Organizations that have outgrown a single analytics cluster have several choices:

THE EVOLUTION OF ANALYTICS INFRASTRUCTURE

With the growing prevalence of cloud-based analytics, data scientists and analysts have grown accustomed to dynamically deploying clusters on services like AWS. By design, these clusters have access to shared datasets, without time-consuming HDFS data hydration periods after initializing a new cluster or destaging cycles upon cluster termination. Specifically, AWS allows users to rapidly launch many analytics clusters on Amazon Elastic Compute Cloud (Amazon EC2) instances, and share data between them on Amazon Simple Storage Service (Amazon S3).

Many analysts now expect these same capabilities on-premise, and we are witnessing an evolution in the ways that on-premise analytics infrastructure is contemplated and deployed.

Analytics testing with Red Hat Ceph Storage and the Hadoop Distributed File System (HDFS) was performed during 2017 and 2018 by Red Hat and QCT using QuantaPlex T21P-4U servers at a QCT lab facility. The same systems and testing environment were used for both Ceph and HDFS testing.

Both of the latter deployment methods typically call upon Ceph Storage as a software-defined object store. This functionality is enabled by the Hadoop S3A filesystem client connector, used by Hadoop to read and write data from Amazon S3 or a compatible service. With the S3A filesystem client connector, Apache Spark and Hadoop jobs and queries can run directly against data held within a shared S3-compatible datastore.

Red Hat Ceph Storage is a natural choice for organizations that want to provide an S3-compatible shared data repository experience to their analysts on-premise. Based on testing by Red Hat and QCT, supporting Spark or Hadoop analytics on Ceph provides a number of benefits over traditional HDFS.

The Hadoop Distributed File System (HDFS) was designed for performance and data locality through a tightlycoupled relationship between compute and storage within the cluster. This tight coupling can be a challenge when different groups seek to share a Hadoop cluster, resulting in large-scale data movement, proliferation of separate clusters, and escalating costs. Moreover, organizations that want to add storage also have to add more compute, causing one or the other to be under or over utilized. Data locality too can suffer in rapidly growing Hadoop clusters, potentially lowering performance as compute resources have to travel further to find the data they need.

To document the ability of Ceph to serve as a shared datastore, Red Hat, QCT, and Intel designed a reference architecture that builds on successful early adopter deployments and now forms the basis for the Red Hat data analytics infrastructure solution.

In addition to simplistic tests such as TestDFSIO, Red Hat wanted to run analytics jobs that were representative of real-world workloads. The TPC Benchmark DS (TPC-DS) was used for ingest, transformation, and query jobs. TPC-DS generates synthetic datasets and provides a set of sample queries intended to model the analytics environment of a large retail company with sales operations from stores, catalogs, and the web. Its schema has tens of tables, with billions of records in some tables. The benchmark defines 99 preconfigured queries, from which the Red Hat team selected the 54 most input/output (I/O)-intensive queries for testing. Categories of tests included:

QCT servers powered by Intel® Xeon® processors were used for testing both the analytics and storage clusters. The QCT QuantaPlex T21P-4U server was used in Red Hat testing as it provides large storage capacity in a small space. It also includes Peripheral Component Interconnect Express (PCIe) Generation 3 (Gen3) slots, allowing Non-volatile Memory Express (NVMe) solid-state drives (SSDs). In Red Hat testing, the Intel Solid State Drives Data Center Family was used for Ceph journaling to accelerate both I/O per second (IOPS) and throughput performance. Capable of delivering up to 780TB of storage in just one 4-rack-unit (4U) system, the QuantaPlex T21P-4U efficiently serves the most demanding cloud storage environments. As shown in Figure 1, a Spark/Hadoop compute cluster was connected with an object store based on Red Hat Ceph Storage, communicating via the Amazon S3A filesystem client connector. The clusters were configured as follows: 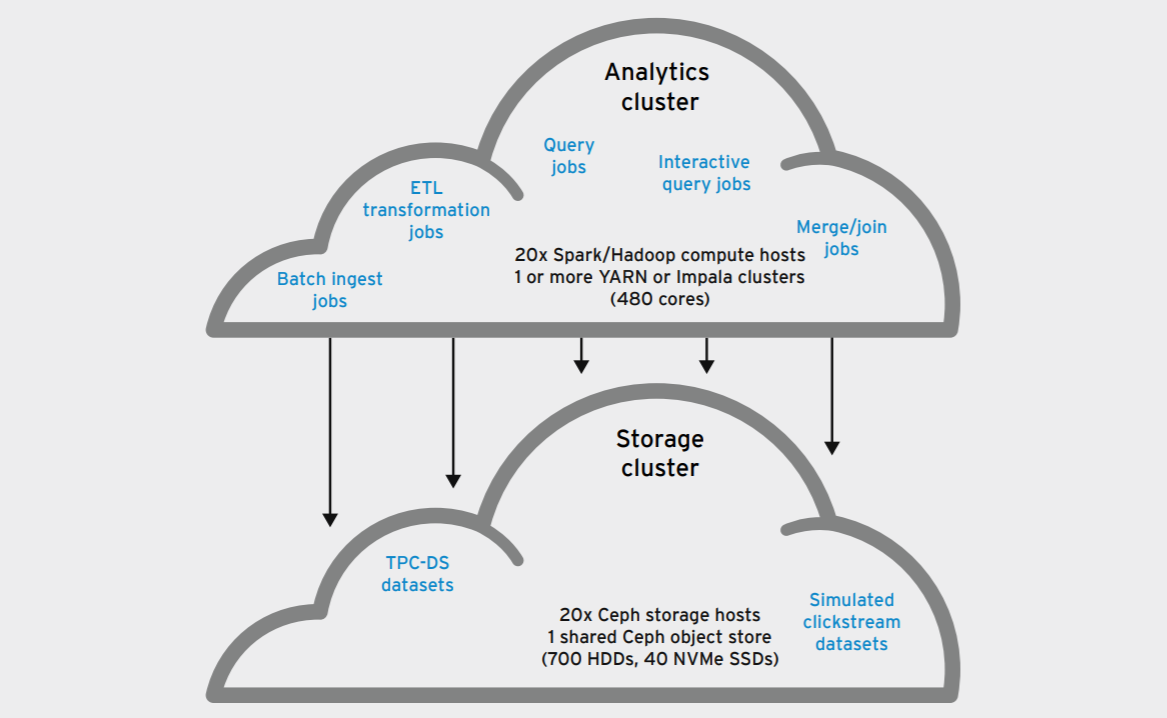 Many factors contribute to overall solution cost. Storage capacity is frequently a major component of the price of a big data solution, so it was a simple proxy in the price/performance comparison in this study. The sections that follow provide a summary and details of the results achieved.

In contrast, Ceph has supported both erasure coding and 3x replication as data durability schemes for years. All of the early adopters that Red Hat worked with are using erasure coding for cost-efficiency reasons. As such, most of the Red Hat testing was conducted with erasure-coded clusters (EC 4:2). Some tests were run with Ceph 3x replication used in the storage cluster to provide an equivalent comparison to HDFS for those tests.

Using storage capacity as a proxy for cost as described above, Figure 2 provides a price/performance summary for eight different workloads described in the sections below (keyed to the illustration). Each of the eight workloads was run with both HDFS and Ceph storage. As expected, the cost of the storage capacity was either the same (when Ceph was configured for 3x replication), or 50% less (when Ceph was configured for erasure coding). For example, workload No. 8 exhibited similar performance with either Ceph or HDFS, but the Ceph storage capacity price was 50% of the HDFS storage capacity price. In the cases of workload No. 1 and No. 2, Ceph 3x replication was used and the relative cost was equivalent to that of HDFS. In the other examples, erasure coding was used, resulting in a 50% cost savings for storage capacity with somewhat lower performance.

Workloads tested are represented in Figure 2 and included the following: 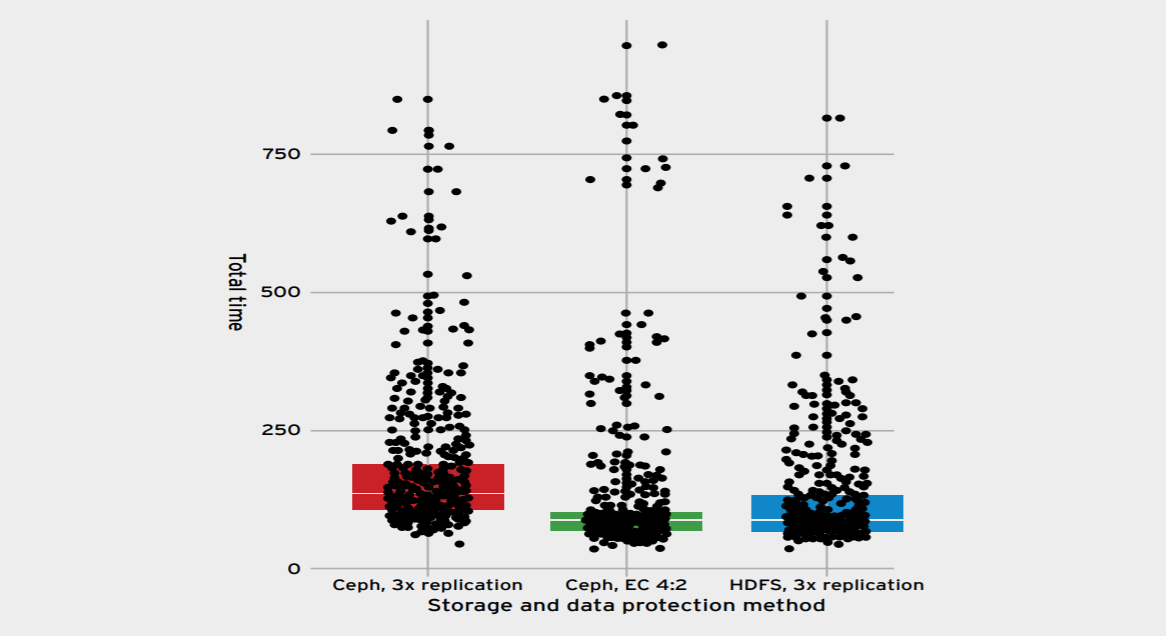 In addition to the testing described above, Red Hat conducted testing over a 24-hour time period to illustrate Ceph cluster sustained ingest rate. For these tests, Red Hat used a variation of the lab as described above. Testing measured a raw ingest rate of approximately 1.3 pebibytes (PiB) per day into a Ceph cluster with EC 4:2 storage configured with 700 HDD data drives (Ceph Object Storage Daemons, or OSDs).

The Red Hat data analytics infrastructure solution, based on Red Hat Ceph Storage as a shared data repository for big data, addresses the growing pains of traditional data analytics infrastructure. It offers significant economic and operational benefits—and some performance trade-offs. Sharing storage between Apache Hadoop clusters clearly makes sense, and CapEx and OpEx can be reduced dramatically by eliminating petabytes of duplicated storage. At the same time, the approach gives different teams the flexibility to choose the exact analytics tools and versions they need. In a head-to-head comparison, Red Hat Ceph Storage can provide up to 50% storage infrastructure cost savings over HDFS through erasure coding, while allowing organizations to scale compute and storage infrastructure independently as needs dictate.