Over the last 10 years, the consumption model for telecommunications service provider networks has evolved. Voice and data revenues have plateaued while data traffic and related costs increase. Digital natives require mobile access to the latest digital services on an increasing basis. Service providers must adapt existing infrastructure and operations to run more efficiently to cope with mounting capacity demand. Networks must be nimble, expanding and shrinking as network resources are used, agile, accommodating rapid service creation and delivery, and significantly cheaper and easier to operate.

Toward this end, service providers are deploying network functions virtualization (NFV) infrastructure that runs network functions - such as routers, switches, and firewalls - as applications in a virtualized environment on commercial off-the-shelf (COTS) equipment. This provides low-cost infrastructure, freedom from vendor lock-in, and the ability to scale the network as demand grows and shrinks.

With NFV, network functions are deployed as virtual machines (VM) on COTS, cloud-based infrastructure, rather than as dedicated physical hardware.

With a single infrastructure for virtual network functions (VNFs), service providers can increase system utilization and streamline administration with a scalable cloud framework to meet new demand. Since new network functions and services are created and deployed virtually, innovation is less risky. New services can be quickly spun up to test market opportunity, and if that opportunity is not realized, decommissioned just as fast, improving business agility and increasing infrastructure flexibility.

Although the transition from PNF to VNF in a cloud infrastructure is not a trivial process, and some service providers prefer to operate a hybrid mobile core, the deployment of an entire virtualized evolved packet core (vEPC) can be achieved today. A vEPC is composed of multiple virtualized functions that reflect those of their physical counterparts. Network functions that are targeted for virtualization within the mobile packet core include:

Affirmed’s Mobile Core vEPC supports the 3GPP control and user plane separation (CUPS) specification that provides independently scalable pathways for both user plane and control plane. This feature provides agility for various network deployments without changing the functionality of the network elements, such as the SGW, PGW, or traffic detection function (TDF).

CUPS provides independent scaling that brings service providers additional architectural flexibility, because it allows them to ramp up only the data plane or control plane functionality needed for the network. This avoids wasteful over provisioning of user plane or control plane VNFs to meet the peak capacity of other VNFs.

This functionality becomes even more important as additional cellular networks support Internet of Things (IoT) traffic, which has different workloads and use cases with different performance requirements from consumer networks. For example, consumer services use more data plane capacity while IoT networks need more signaling capacity. CUPS also supports a distributed network model for use cases that require low latency, such as video content distribution network (CDNs), or high bandwidth, such as fixed wireless. For these deployments, user plane nodes can be hosted at distributed edge datacenter locations, and the control plane nodes can be placed at more centralized locations.

The flexibility and scalability provided by the Affirmed Mobile Core VNF architecture can provide the performance and high availability needed for rapidly evolving services and demands.

Although PCI (Peripheral Component Interconnect) passthrough can provide near line-rate performance to the VNFs, it limits the flexibility of the deployment because it breaks the software abstraction as it creates a tight coupling between the VM and the network interface controller (NIC). The SR-IOV extension of the PCI express (PCIe) specification allows a device, such as a NIC, to separate access to its resources among multiple PCIe hardware functions. In the NFV infrastructure, SR-IOV allows different VMs to share a single NIC.

With support for SR-IOV in Red Hat OpenStack Platform, Red Hat partner solutions for vEPC can achieve the performance required for their applications without sacrificing the ability to share physical NICs among VMs. This ability retains the needed software abstraction and decouples hardware from software.

The DPDK is designed to run in a user’s space for fast packet processing. This ability results in delivering up to wire speed performance for specific use cases depending on processing depth. DPDK provides the most significant performance improvement for applications required to handle many small packets (~64 bytes).

Red Hat has bundled Open vSwitch with DPDK to achieve improved performance, resulting in a DPDK-accelerated OVS (OVS+DPDK). At a high level, this architecture is transparent to the VNFs, as the interfaces it exposes are predominantly unchanged.

The features of vEPC range from standard 3GPP capabilities to functions that add additional value, such as DPI, URL enrichment, and video or content caching.

Based on the application, the dimensioning of vEPC varies. For example, IoT or machine-to-machine (M2M) applications are typically high in session count but can have low throughput requirements. IoT or M2M typically wake up, deliver the necessary information using small messages, and then go back to sleep. The vEPC must be dimensioned for high memory due to the high session count. Video streaming applications must take user experience into consideration, and these applications typically require high throughput and low latency.

Another example of vEPC dimensioning is billing applications. These applications constantly create and store billing entry data for call data records (CDRs) on disk. In this case, the vEPC must be designed and provisioned for constant input/output operations (IOPs), specifically to support intensive-messaging applications such as the policy and charging rules function (PCRF), for which constant messaging occurs based on the activity of the subscribers.

VoLTE typically implies a large number of small packets, for example, 64 byte packets. However, packets could be larger and vary, based on the codec being used. In summary, there must be design and tuning work performed at the infrastructure level to accommodate different mobile services running on the vEPC.

Table 1 summarizes the general requirements of the vEPC. While some key performance indicators (KPIs), such as session count and total bandwidth requirement, might vary based on the size of the deployment, others remain constant. Important KPIs to monitor include packet loss, jitter, and latency.

Working with Intel technology experts who witnessed the test set up and parameters, Affirmed demonstrated NFV performance and linear scalability with testing of its Mobile Core vEPC solution and Red Hat OpenStack Platform with SR-IOV optimization feature on servers powered by Intel Xeon Platinum and Gold processors. The emphasis of the tests was on the performance of vEPC dataplane VMs.

The following table details the results of the vEPC testing. The test was conducted using 650-byte packet size, which was selected to show real-world results. Throughput is shown in both Gigabits per second and packets per second to provide comprehensive throughput analysis.

Three different tests were performed for each server:

Red Hat provides an ideal platform for NFV infrastructure. As the only open technology vendor that delivers the entire core software stack needed for NFV, Red Hat can ensure better interoperability, stability, and security across your NFV environment.

As shown in Figure 1, each layer of the Red Hat stack delivers key features for your NFV environment. With this integrated software stack, Red Hat delivers the scalability, deployability, availability, performance, and security needed for effective NFV implementations. 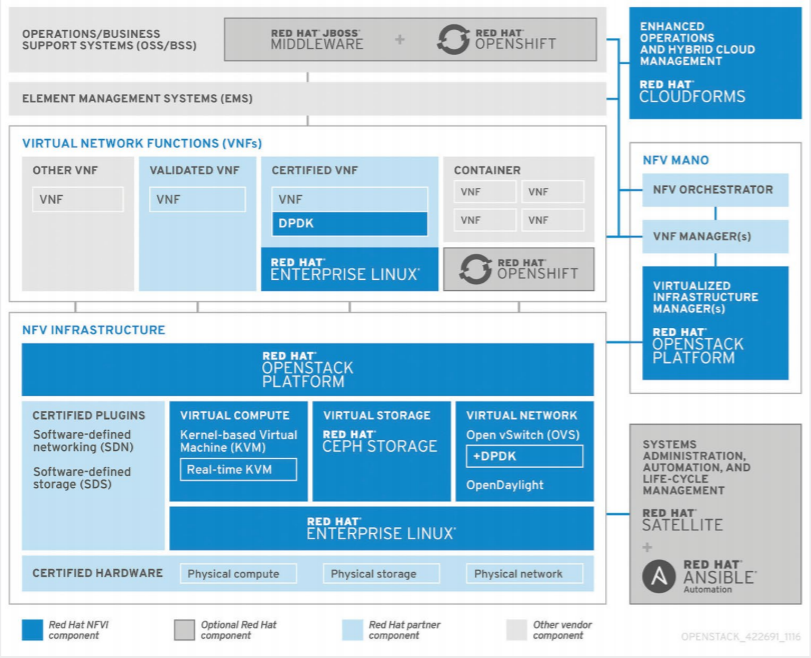 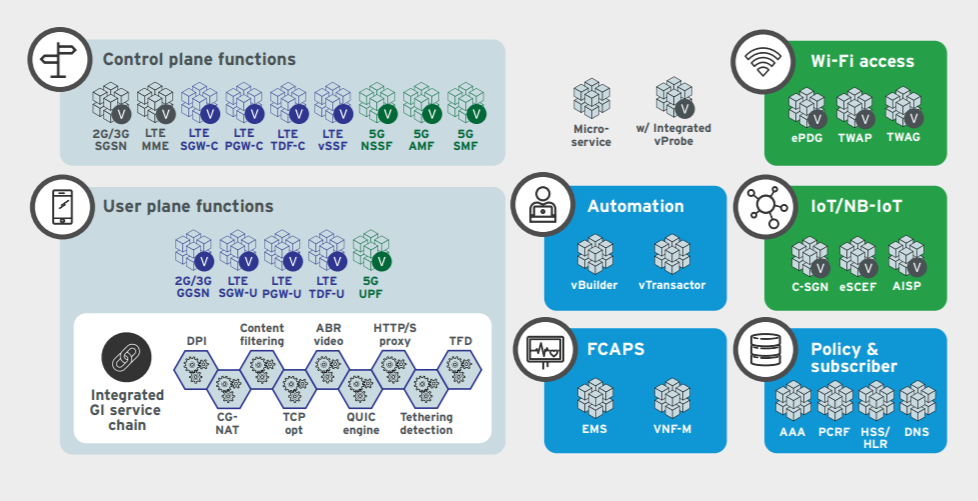 With a fully integrated software and storage stack, Red Hat’s NFV solution offers added security and a scalable, high-performance, and reliable platform for vEPC infrastructure. Contact your Red Hat sales representative to learn how an NFV infrastructure based on the Red Hat stack can help you reduce costs, improve agility, and prepare for the future. To explore further operational gains, consider configuration automation tools such as Red Hat Ansible® Automation.

Many of the world’s top mobile service providers are using Affirmed Networks’ NFV solution. Affirmed has over 80 customers, including tier-1 and tier-2 providers. Learn more at affirmednetworks.com.