Rapidly deploy blockchain networks for your enterprise with BlockApps

BUILD BLOCKCHAIN APPLICATIONS FOR YOUR ENTERPRISE

Blockchains are distributed ledgers that maintain a continuously growing list of records called blocks. Each block contains a time stamp and a link to a previous block. That allows the data in each block to be confirmed by the network participants so all parties can agree on the shared dataset, yet no single party has complete authority or is vulnerable.

Traditionally, businesses have faced the complex challenge of launching blockchain networks, testing blockchain applications, and building a secure enterprise-grade solution on their own. They had to integrate disparate software elements, such as integrated development environments (IDEs), compilers, wallets, and application programming interfaces (APIs), just to start building their app.

Deploying BlockApps STRATO on top of OpenShift Container Platform—an application platform that helps you develop, deploy, and manage new and existing applications across physical, virtual, or public cloud infrastructures—gives enterprises the flexibility to bridge traditional on-premise and public cloud deployment configurations. Enterprise blockchains can be deployed across clouds to eliminate single points of failure, and developers can easily unify various microservices that may be running on different cloud providers—without time-consuming setup.

BlockApps STRATO also integrates with existing databases and makes it easy to for enterprises to query and view blockchain data at any moment, an essential feature for teams that expect traditional reporting tools and methods to work out of the box.

As one of the first Blockchain-as-a-Service (BaaS) companies, BlockApps enables blockchain solutions for both startups and Fortune 500 organizations. BlockApps supports the Enterprise Ethereum Alliance (EEA) in its efforts to strengthen enterprisegrade extensions of Ethereum-based blockchain networks. The latest release of the EEA 1.0 specification gives the global Ethereum community a single, cross-platform standard that speeds up business transactions, builds greater trust in smart contracts, and creates a unifying business model. 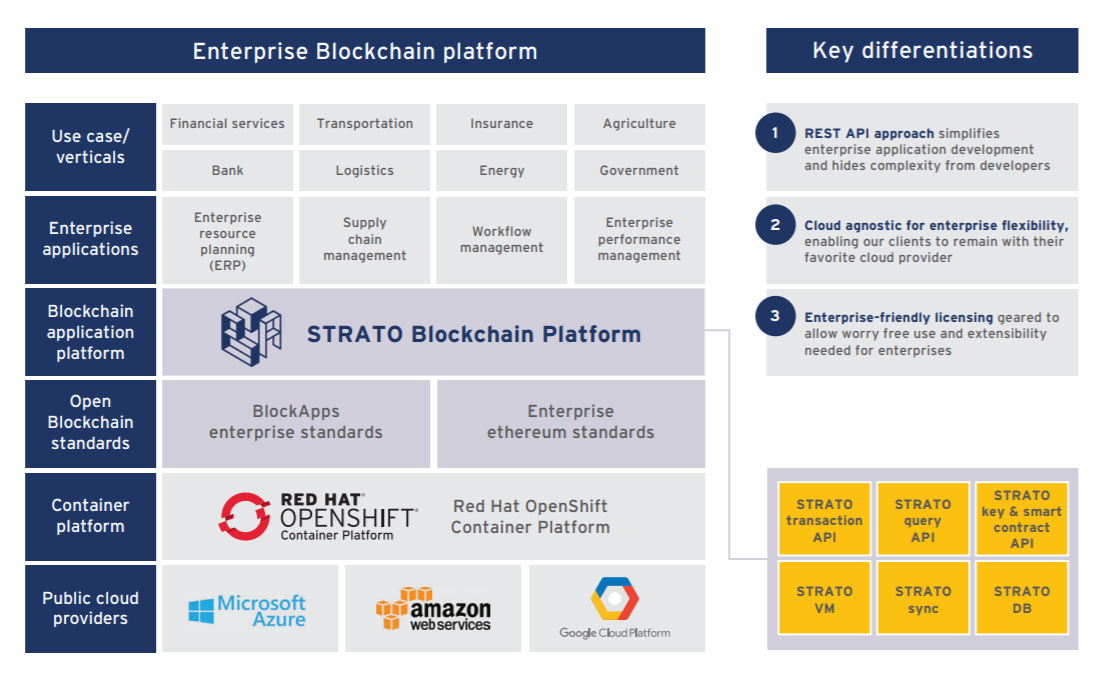