There are two primary methods available to remotely manage and administer a Red Hat Enterprise Linux (RHEL) system: the command line interface over an SSH connection and the RHEL web console.

The web console provides a web-based graphical interface for managing and monitoring systems that can be used to complete a wide variety of tasks, such as managing storage, users and the firewall, monitoring performance metrics, reviewing log files, installing system updates and more. For more information about the web console, see the Managing systems using the RHEL 9 web console documentation.

If you are using the web console in your environment, it is important that you properly configure it to meet your organization's security requirements.

The RHEL web console is based on the upstream Cockpit project. Within RHEL, the RPM packages and other components use the Cockpit name, so you will see the names web console and Cockpit used interchangeably.

There are two main methods to access the web console:

There are disadvantages of running the Cockpit web server on every host. One concern is that every open port on a system increases the attack surface. Also, the web console uses self-signed certificates by default, which can lead to man-in-the-middle attacks. Of course the web console also supports using signed TLS certificates, but this increases the time and effort needed to implement and maintain the web console. Based on these considerations, access methods that utilize an SSH connection are preferred.

This article focuses on the access methods that utilize an SSH connection. A future article will focus on running the Cockpit web server on each RHEL host.

There are several ways to access the web console over an SSH connection:

Another advantage of using SSH connections is that most environments already have SSH running and configured, and most organizations already have firewall / network communications configured to allow SSH traffic.

Due to these advantages, it is recommended to use one of the methods that connects to the web console over SSH rather than running the Cockpit web server on each host.

On my bastion host, I’ll start by running a command to install the cockpit package (on most RHEL installations this will be installed by default):

I’ll enable the Cockpit web server to listen on the bastion host by starting and enabling the cockpit.socket systemd unit.

You’ll also want to verify the cockpit service is enabled in your firewall configuration.

After these steps have been completed, I can connect to my bastion host on port 9090 with a web browser and authenticate with a user account and password.

Once logged in, I can see my user name and host name in the upper right corner of the page. There is also a down arrow that opens a menu with an Add new host button. 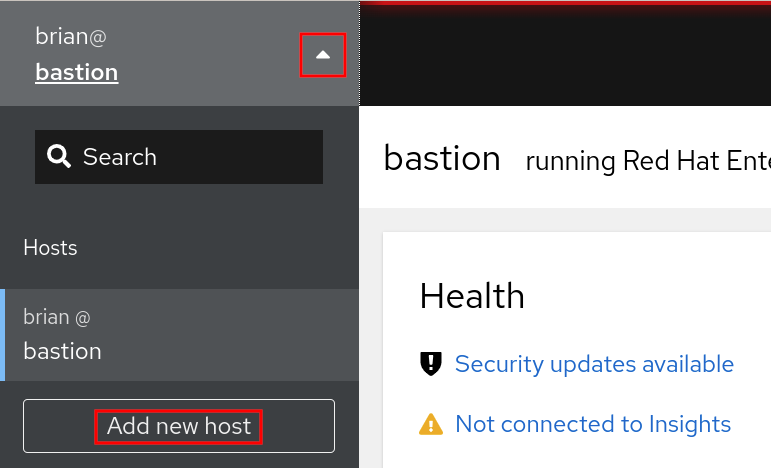 On the Add new host screen, I can specify the host name for the remote host that I would like to access (in this example, the rhel9.example.com host). In my example, I’m using the same user name (brian) on both the bastion host and remote host so I can leave the user name field blank. In addition, I can specify a color that I would like to assign to this host (which will be shown at the top of the window later when I connect to the host), and then click the Add button.

If this is the first time I’ve established an SSH connection to this host, I’ll get a message that specifies I need to confirm the SSH key fingerprint for the remote host. Once confirmed, I’ll click the Accept key and connect button. 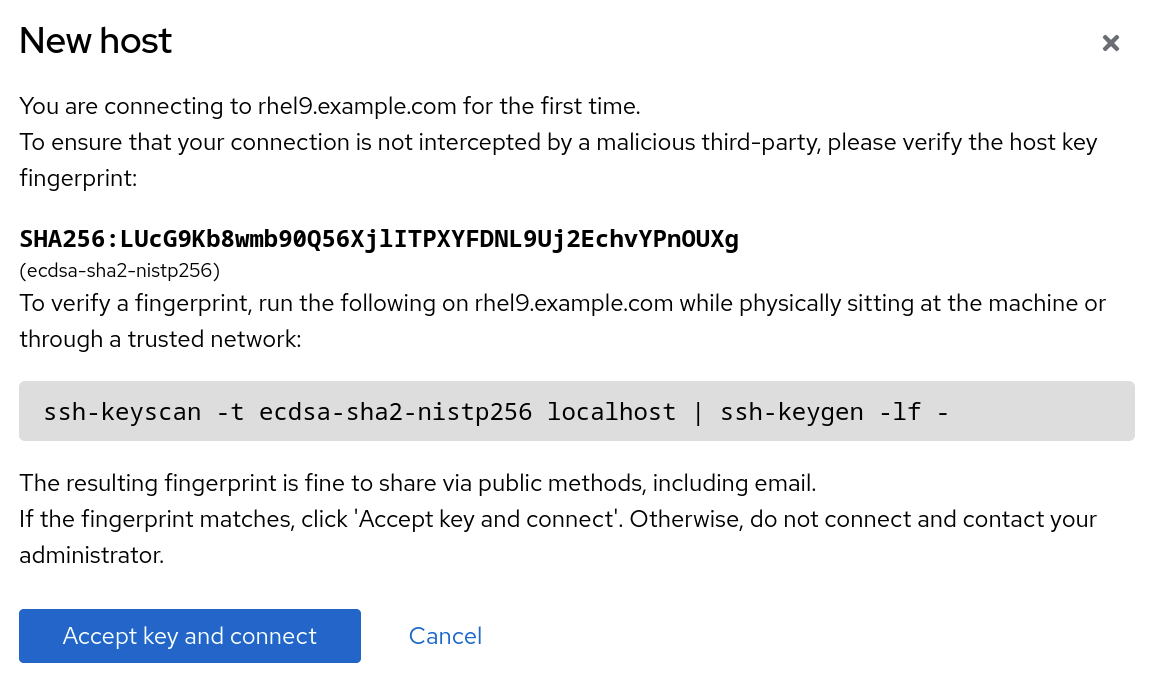 When connected to the rhel9.example.com host, note that the yellow color I had chosen is shown at the top of the window: 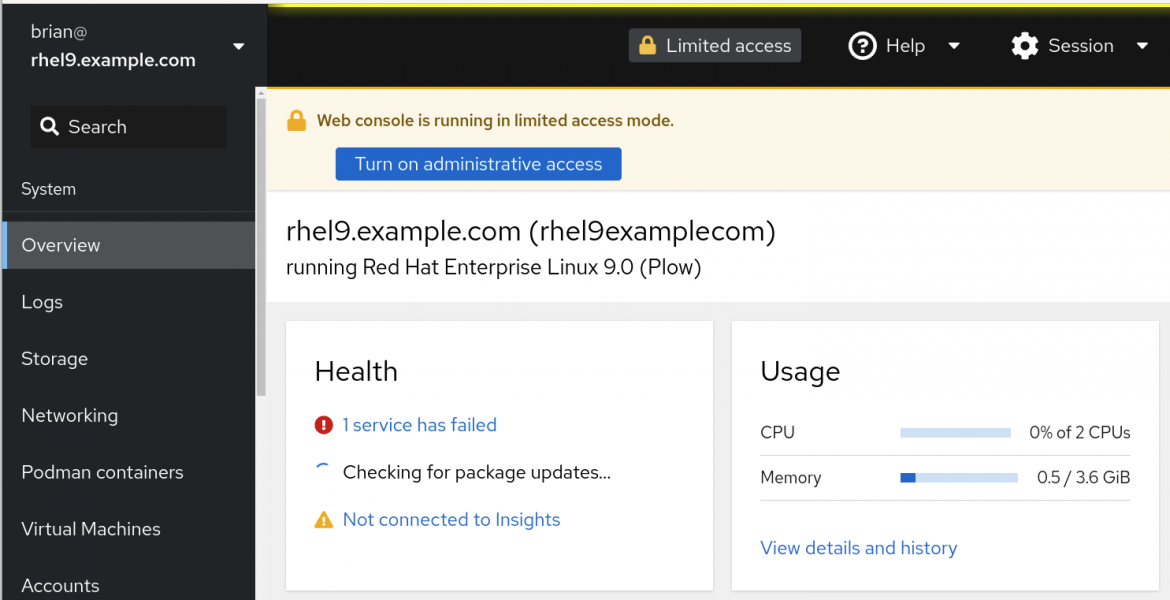 Each remote host that you are connecting to needs to have the cockpit-system package installed. If you attempt to connect to a system without this package, you’ll receive a message that Cockpit is not installed.

If you are using a Linux workstation, you can make your local workstation your web console bastion host. With this configuration, you can opt to not open the cockpit service in the firewall so that the Cockpit web server is not accessible from remote hosts.

If you utilize Red Hat Satellite in your environment, you can optionally enable an integration between Satellite and the web console on your Satellite managed hosts.

This integration utilizes the remote execution framework and SSH keys that many Satellite customers already have configured in their environment.

For more information on how to configure the Satellite web console integration, see How to access and manage RHEL within Red Hat Satellite.

If you are using a Linux workstation, the Cockpit Client Flatpak is another way to access the web console on remote servers utilizing an SSH connection.

Note that Red Hat does not provide support for the Cockpit Client Flatpak.

Once the Cockpit Client Flatpak is installed and started, you’ll be presented with a screen prompting you to specify a host name. In this example, I’ll specify that I would like to connect to the rhel9.example.com host using the brian user account. 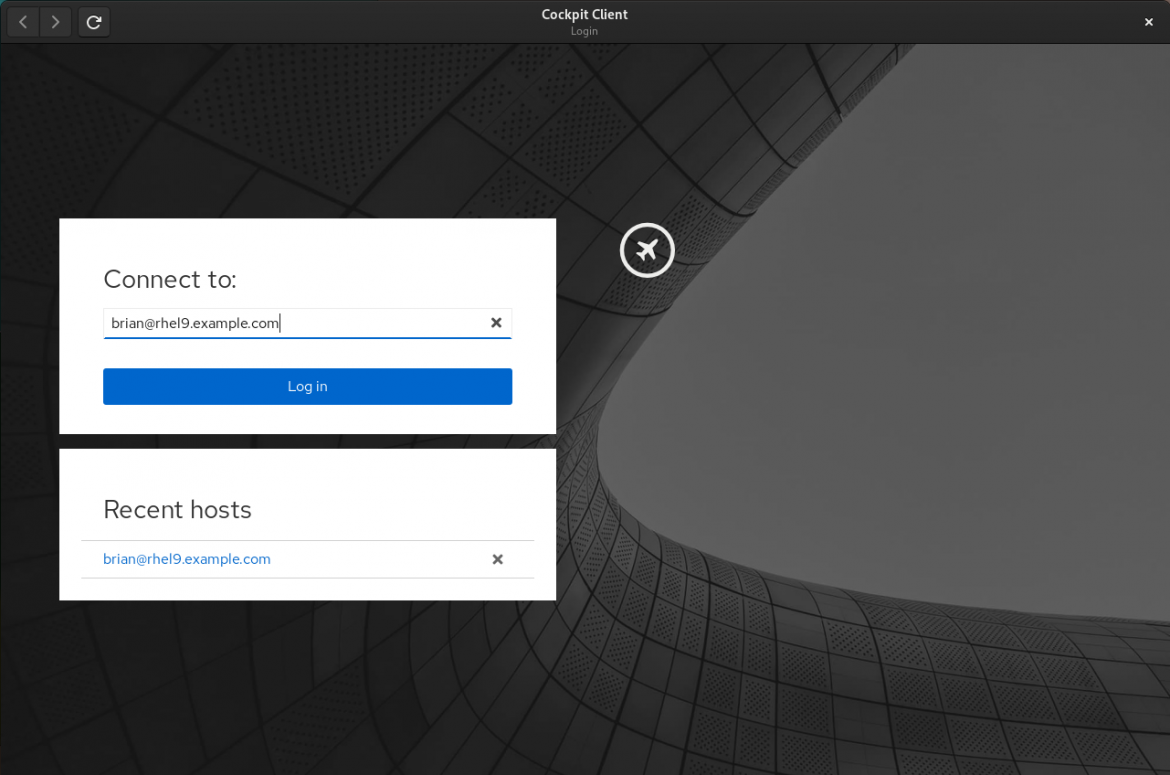 If you are new to the RHEL web console and want to try it out and learn more, head over to Red Hat Enterprise Linux Self-Paced Labs where we have a number of hands-on labs available, including labs related to the web console.