Why Software Defined Storage is set to disrupt the world of containers. And why you should care.

Containers have the potential to be hugely disruptive - they are about to impact almost every process and person within the data center. Container technology will also impact how we think about storage for applications and microservices. In turn, software defined storage will impact how storage is dynamically provisioned and managed for containerized applications.

Through close integration with orchestration frameworks such as Kubernetes and Platform as a Service (PaaS) such as OpenShift, Red Hat Storage provides seamless, enterprise grade storage for mission critical applications in containers.

Why persistent storage for containers?

In a previous blog post we discussed the need for persistent storage for applications running in containers and PaaS environments.

In the video below, we add some more detail around Red Hat’s efforts to smooth container adoption through an end to end technology stack. In addition, we address some of the fundamental changes to the storage industry that we believe will result from the mainstream adoption of containers. 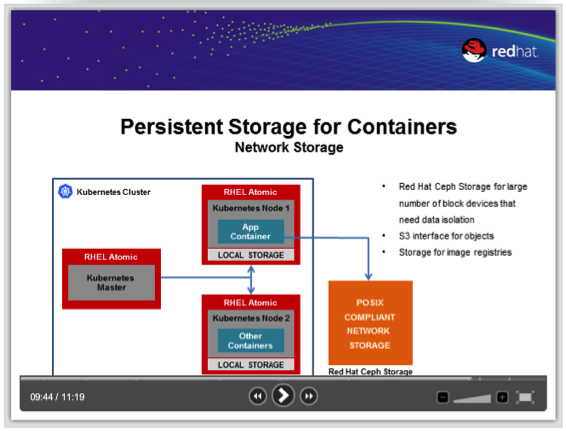 It’s inevitable that storage vendors will have to think about containers, not as an afterthought, but instead as a key design principle, in future releases. Software defined storage is especially well placed to address those demands given its inherent hardware independence.

In particular, software defined storage is uniquely capable of being managed under a single control plane - something that traditional storage vendors may struggle with in containerized environments.

In addition, software defined storage can truly deliver on the promise of containers (faster app deployment and frictionless IT) by giving more control over storage to developers. Yes, developers!

Since when did developers start caring about storage?

In a sense they always have. Developers struggle with consistent and persistent storage between dev, test and production, and with scaling issues once the app is deployed.

By building a single control plane for applications and storage, developers now can have much more granular control and, in some cases, can entirely bypass working with ops to request a storage share that is purpose-built for the application.

Kubernetes has emerged as the key technology for container management and orchestration. Red Hat engineers are hard at work to integrate Red Hat Gluster Storage and Red Hat Ceph Storage into OpenShift Enterprise. This sort of seamless management of storage via the dev environment - without any human intervention - is invaluable to developers.

The future of storage in a microservices centric data center.

In the future, applications will no longer be large, monolithic chunks of code, but instead may be composed of smaller, independently deployable and highly scalable constructs known as microservices. Another possible key side effect of the container revolution is that it may enable a smooth transition to a microservices centric data center.

Persistent storage managed under one control plane becomes even more critical as we head towards the mainstream adoption of microservices. We see an eventual and inevitable next step is storage served out as a microservice from dedicated storage containers. These storage containers will run alongside compute containers on the same set of hosts and provisioned dynamically by one unified orchestrator (such as Kubernetes). This will go a long way in addressing storage requirements for microservices, essentially eliminating the need for independent storage appliances in the future. 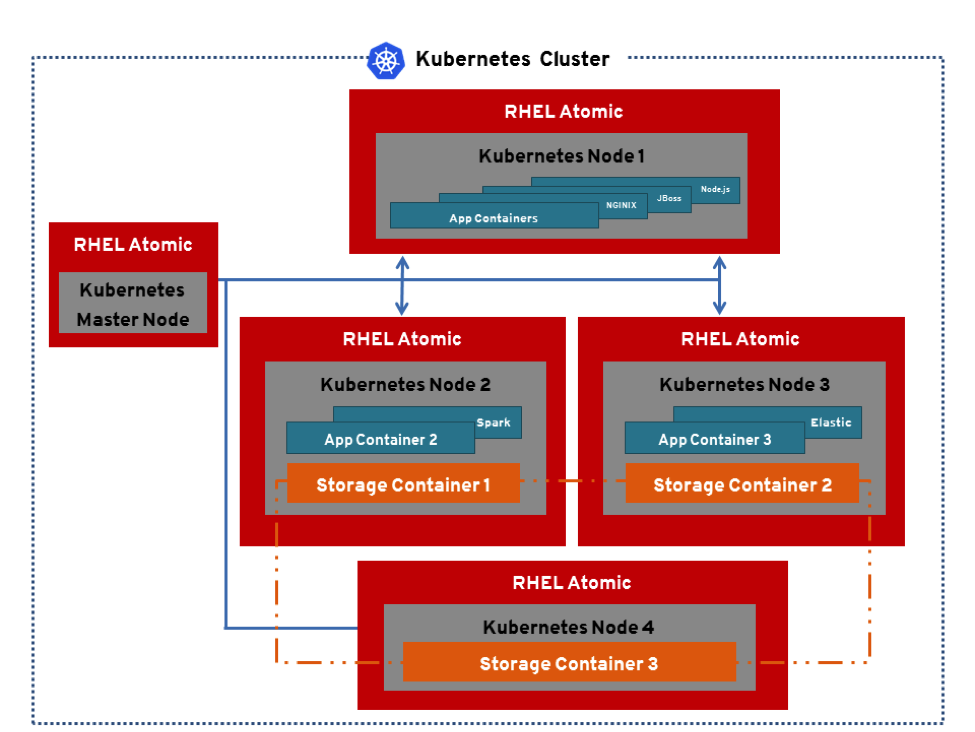 Red Hat Storage is going beyond what any other storage vendor is doing in terms of supporting containerized environments. We are connecting containers to storage, yes, but we are also enabling containerization of the storage platform itself. In other words, Red Hat is driving the future of storage in a container driven data center.

We hope you continue to follow the story at redhat.com/storage