As organizations modernize their application delivery process and adopt new tools to make them more efficient, infrastructure as code (IaC) has become a critical practice. IaC is an umbrella term, usually referring to a broad range of tools, operational frameworks, and a rich ecosystem. In this piece, we describe what is meant by infrastructure as code and how HashiCorp Terraform and Red Hat® Ansible® Automation can be used as a foundation for an IaC initiative.

WHAT IS INFRASTRUCTURE AS CODE?

In the last four decades, most approaches to infrastructure management have relied on graphical and command-line user interfaces that human operators have used to initialize or modify system configurations. These approaches are prone to human error. The process carried out by an operator might be documented by a checklist or a memorized routine without enforced oversight or iterative versioning.

By treating infrastructure as code, IT organizations can automate management tasks while using the best practices of software development, including code review and version control. This approach mitigates management complexity by breaking down a task into smaller, more manageable processes, controlling the execution of code, and effortlessly maintaining up-to-date documentation.

The IaC approach also reduces operational risks by allowing multiple subject matter experts to peer review the code and by saving all the previous revisions of a codified infrastructure, enabling previous versions to be restored in case of mistakes.

Ultimately, the IaC approach mitigates human errors by enforcing an automated execution of the management task performed on the IT infrastructure.

INFRASTRUCTURE AS CODE WITH TERRAFORM AND ANSIBLE AUTOMATION

To address the variety of operational challenges that an IT organization faces in large-scale environments, the industry has developed many tools with specific focus areas.

Two of the most daunting operational challenges in modern environments are infrastructure provisioning and configuration management. As IT environments grow in scale and complexity, human errors multiply across all aspects of infrastructure and application life cycle—from provisioning to configuration, through patching and security enforcement, all the way to final decommissioning.

HashiCorp Terraform is an IaC tool for provisioning and managing IT resources. Configuration files describe to Terraform the components needed to run a single application—or your entire datacenter. Terraform focuses on the higher-level abstraction of the datacenter and associated services without sacrificing the ability to use other tools to perform post-creation tasks.

Modern IT organizations face enormous challenges to deliver increasingly more agile environments. In most cases, no single tool can address all the needs and perform all tasks efficiently. To solve this problem, Ansible Automation provides an automation framework designed to easily integrate with and complement third-party solutions. Ansible Automation can perform automation tasks itself or invoke external tools, such as HashiCorp Terraform, allowing IT organizations to use their preferred tools to automate various aspects of IT operations.

Both Ansible Automation and Terraform operate using an agentless architecture. Both also promote a simplified human-readable interface for defining automation, making adoption easier for enterprise and community users alike. Because of these similarities, these products are frequently used together.

While this combination leads to some overlap in capabilities, Terraform and Ansible Automation can effectively build the foundation of an IaC initiative. For example, Terraform can be used for infrastructure provisioning and decommissioning while Ansible Automation can be used for infrastructure configuration and patching, as well as application deployment and maintenance.

Terraform and Ansible Automation can be integrated in different ways, depending on the operating model of the IT organization:

From an infrastructure perspective, initiation with Terraform makes sense if the goal is to create infrastructure resources and if you use an IaC approach to gain a representation of configuration and images to be deployed using Ansible Automation. These resources can then be delivered to the application team for further action.

Example: A cloud operations team creates a selection of virtual machines (VMs) at the request of the application team. The VMs may have standard packages installed, but they do not have a business application identity.

From an application or broader system perspective, initiation with Ansible Automation makes sense. The end-to-end definition of the automation required for the application stack includes a step to provision infrastructure, and in this case, Ansible Automation would call Terraform for provisioning activities before continuing with its workflow.

Example: An application team kicks off a build pipeline to create, configure, test, and promote to production a new version of an application.

The mechanism for invoking external tools in Terraform is called a provisioner, and it includes several built-in options. The two applicable to Ansible Automation are local-exec and remote-exec.

The remote-exec provisioner, which allows Terraform to execute commands against a remote resource, can be used to invoke Ansible Playbooks on remote resources after creation. This provisioner is used when Ansible Automation is running on the machine being configured.

To invoke locally using local-exec requires Terraform to invoke ansible-playbook to start running a playbook that can be specified using the command argument. Below is an example of a Terraform configuration that uses local-exec to provision a VM.

A Terraform plan can be generated using the following command:

After the plan is reviewed, a Terraform apply can be run using the following command:

Figure 1 details how this process works. 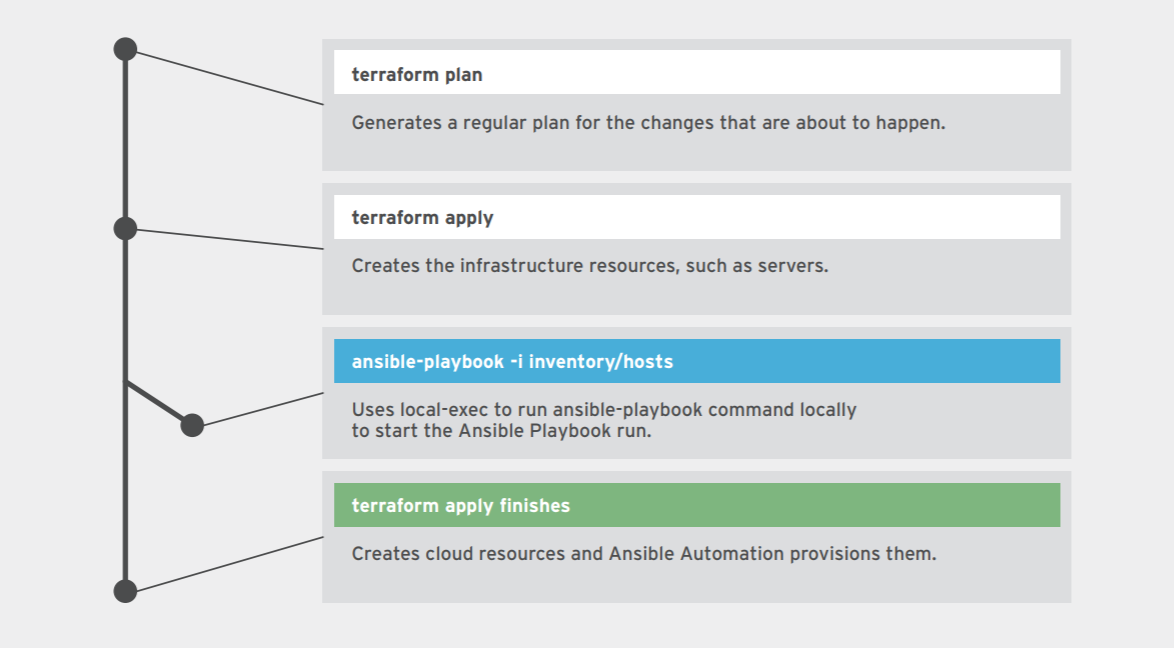 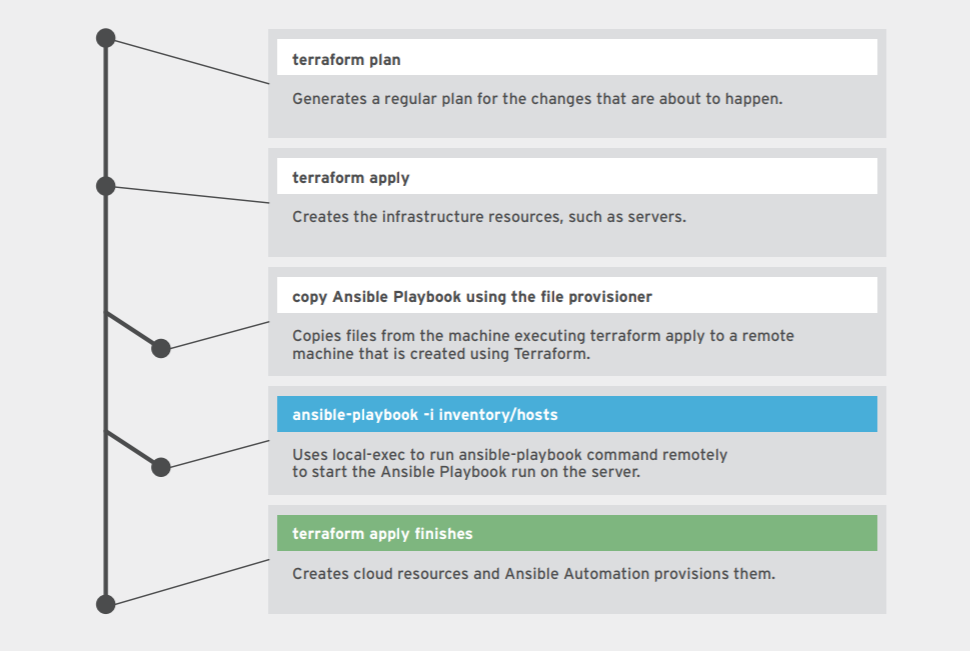 This approach works well when Terraform is responsible for creating the resources, and Ansible Automation is installed and invoked on the remote machine.

The project_path variable defines where the Terraform configuration is stored. To learn more about the Ansible Terraform module, visit https://docs.ansible.com/ansible/latest/modules/terraform_ module.html.

HashiCorp Terraform and Red Hat Ansible Automation are solutions that support an infrastructure as code initiative. Both products offer strengths and areas of focus and support integrations with third-party solutions. As technology partners, HashiCorp and Red Hat are committed to supporting scenarios where Terraform and Ansible Automation can complement each other. This commitment allows joint customers to automate end-to-end infrastructure and application life-cycle management—from provisioning and retirement of computing resources to application deployment and configuration of operating systems, middleware, and applications.