When it comes to modernizing IT infrastructure, organizations want to adopt the hybrid cloud, but may find their workloads are stuck in traditional environments that are costly to maintain, complex to manage, and difficult to scale. Are you faced with a similar challenge? In this post we'll show you how you can use Red Hat Enterprise Linux's Image Builder to deploy to the cloud more easily.

Simplicity, consistency and repeatability are key elements of the solution when it comes to effortlessly migrating workloads or scaling a fleet of servers up and down depending on the load. It boils down to having a solid foundational operating system that can offer a standardized way to configure and create custom system images as well as quickly deploy them in a variety of cloud and virtualized environments.

Prior to 8.3, RHEL image builder was using the lorax-composer backend, which is an API server that allows building disk images using blueprints. With the Red Hat Enterprise Linux (RHEL) 8.3 release, the lorax-composer backend was replaced with osbuild-composer to advance the capabilities of image builder to include the ability to generate custom images suitable for pushing to the cloud and other virtualized environments.

This facilitates rapid deployment of images and updates, and accelerates cloud workload migrations, and streamlines the path from development to production.

So now, let’s look at some of the key steps to produce the image using RHEL Image Builder and push it to the cloud using Image Builder’s new "Push-to-cloud" capability.

Getting started with RHEL Image Builder

Before starting, you need to prepare a few things:

First, you’ll need to be running RHEL 8.3. You also need to have the web console installed if you haven’t already installed it. To install and enable the RHEL web console, check out the steps in the documentation here.

Next, in order to obtain the Image Builder plugin for the web console, and the dependent backend components run the following command:

Of course, you will also need to have a cloud provider account. In this post, we are going to show how to build and push images to the Microsoft Azure cloud, but you can also generate images for other commonly used cloud platforms as well such as AMIs for Amazon AWS.

Once you have RHEL Image builder and the Web console installed, here is how to go about creating the image:

Select Image Builder in the left menu, and click the “Create Blueprint” button to create your image blueprint. 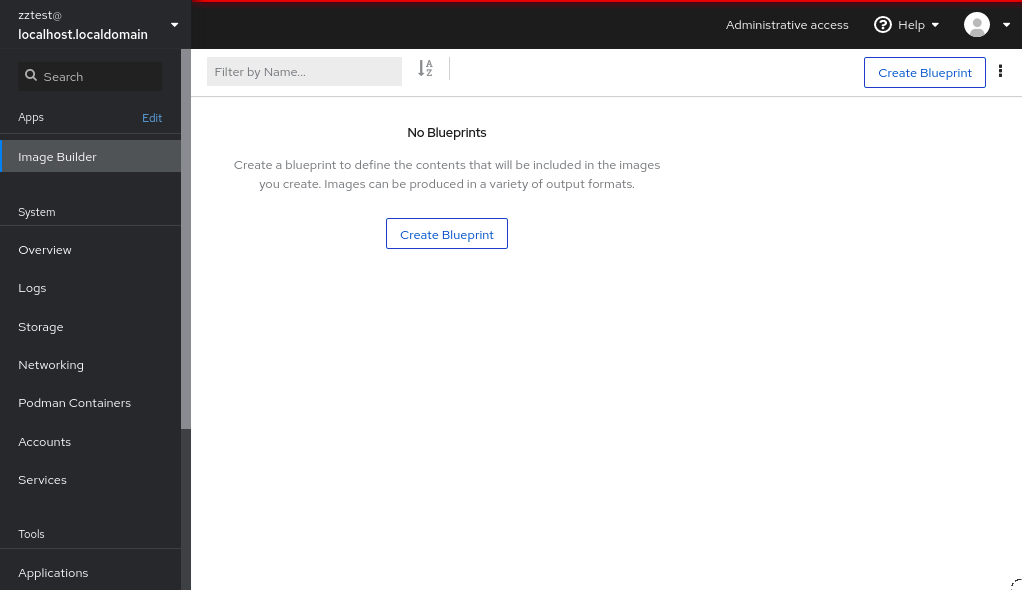 Provide a name and optional description for the image blueprint. In this example, it’s called "Demo-Blueprint." 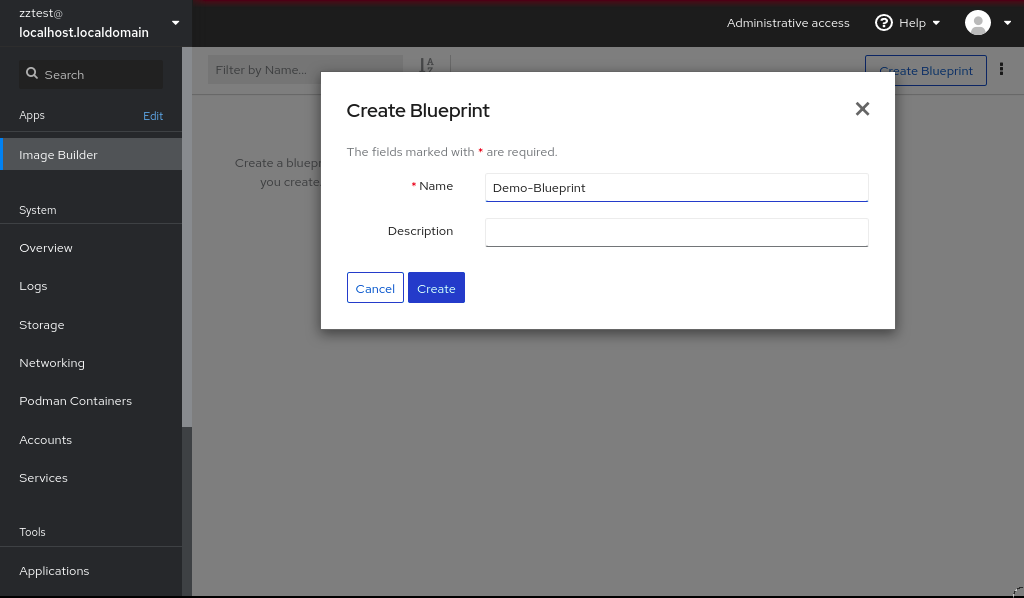 Pick from the available list of packages what to include in your blueprint. In this example, we have selected apache server and the Go programming language. 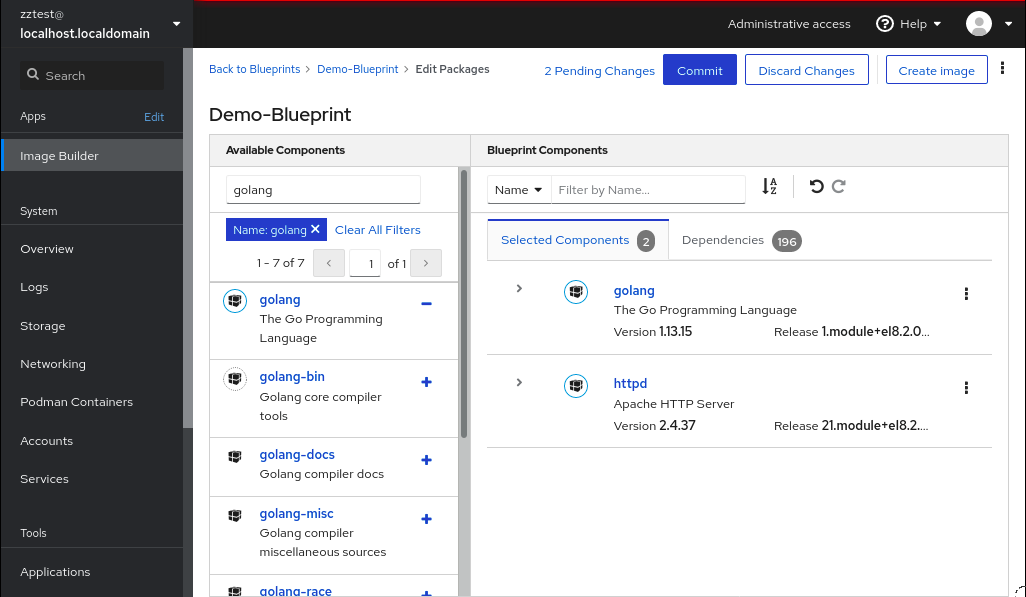 To complete this step, commit the blueprint to save it.

Next, create an image based on the blueprint from the previous step. For this, click the “Create Image” button and choose from the available blueprint options, and image types. To build an image for the Microsoft Azure cloud, choose the Azure disk image (.vhd) option and mark the image to be uploaded to Azure. You should also provide a size limit for the image that is created. 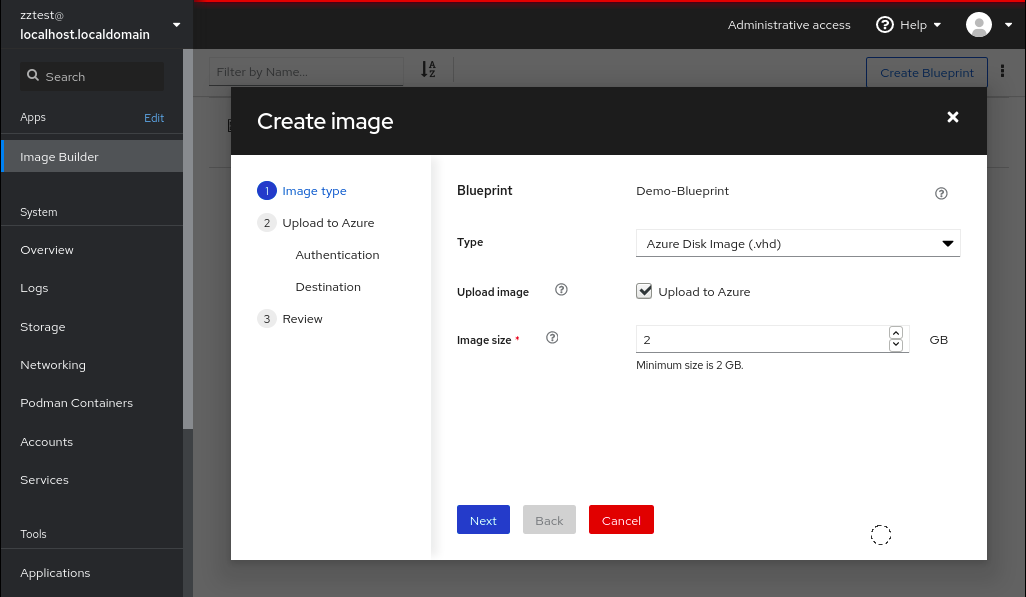 Log into your Microsoft Azure portal to get more details about your Azure storage account to be used to store the image.

a. As shown in the screenshot below, there is an Azure storage account named "rhstorageacnt1" and a resource group called "MyResourceGroup." We will use the resource group later when running the image in Azure. 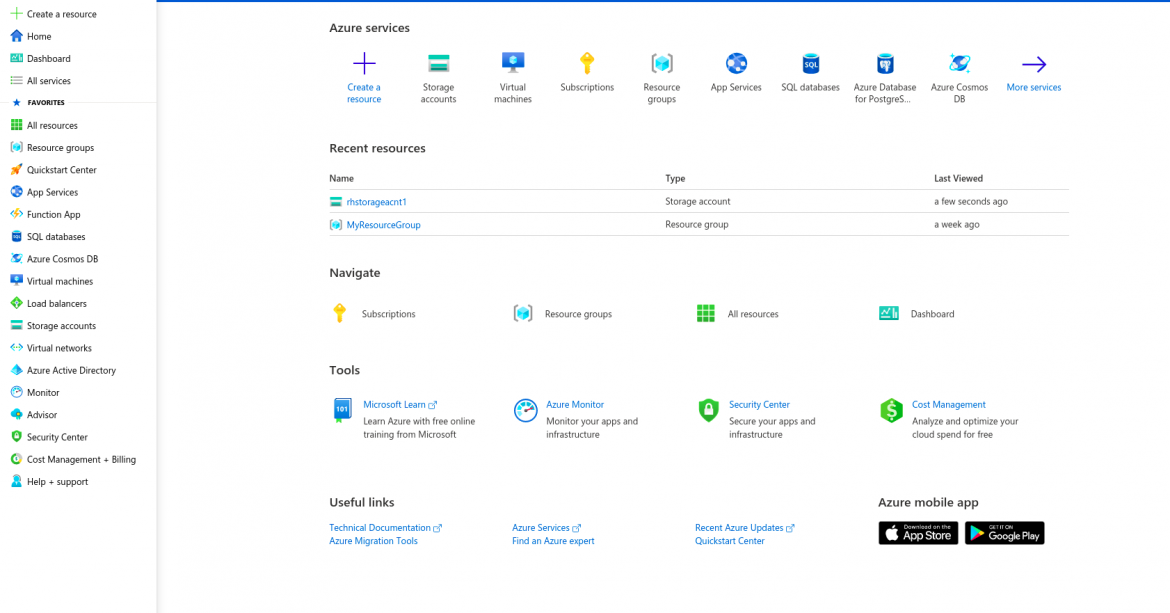 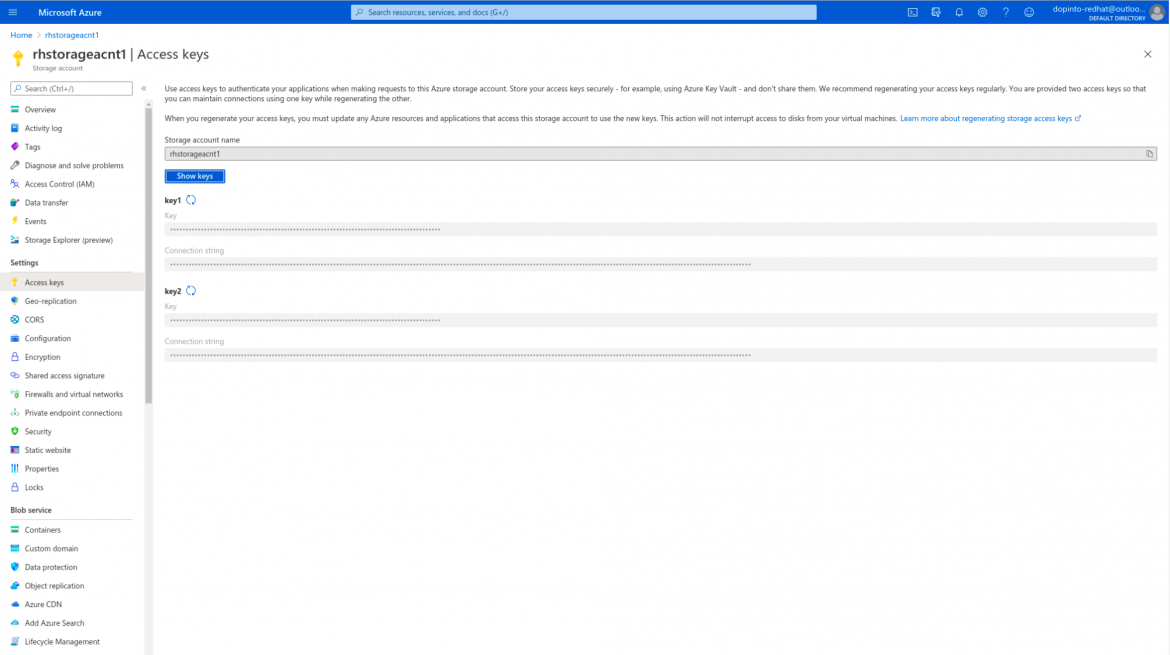 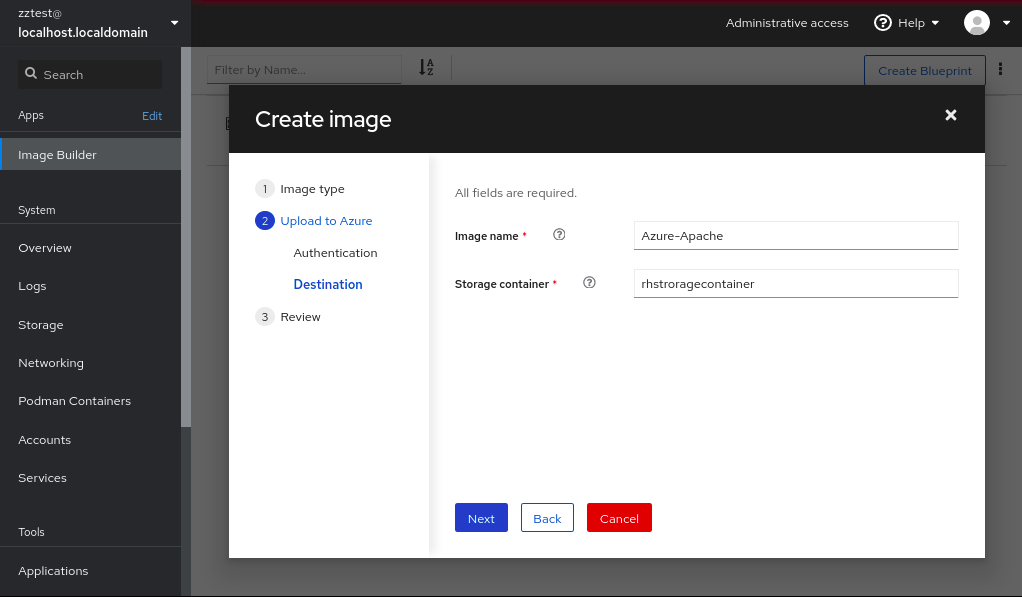 Click the next button, and then hit finish to start creating and uploading the image. 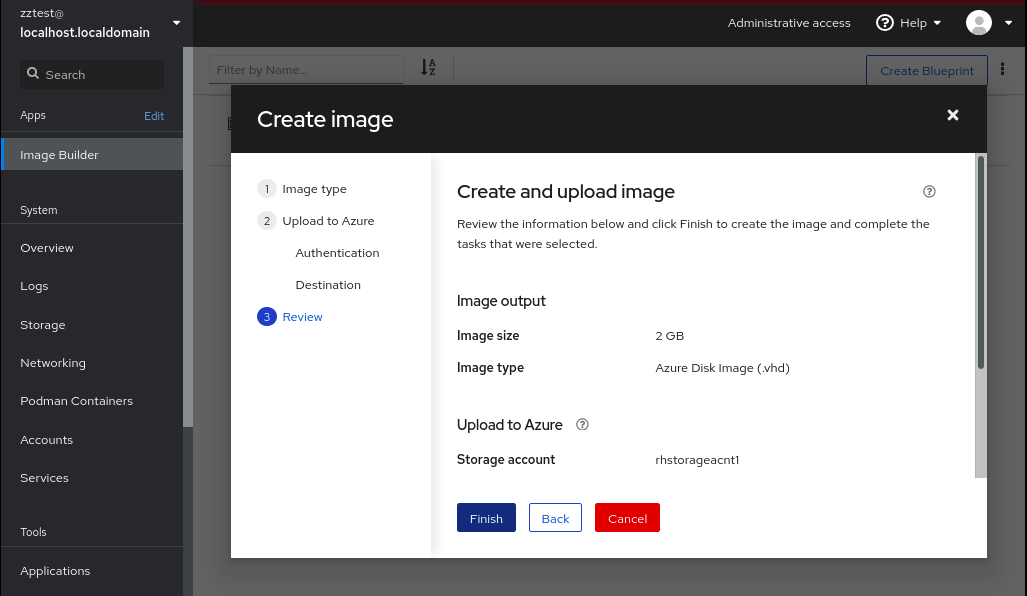 After a few minutes, the image should be available and pushed to the Microsoft Azure cloud. 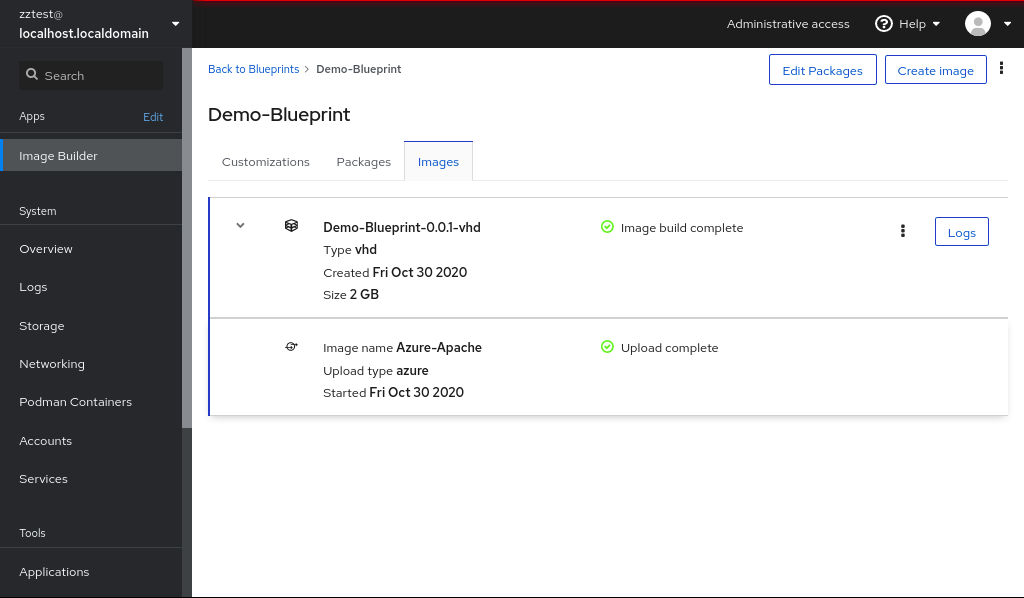 After you have uploaded the image, it’s time to spin it up. For this, let’s use the Azure CLI tools for Linux, which are a set of commands used to create and manage Azure resources.

To install the Azure CLI tools, run the following commands at your RHEL command prompt:

Log in to the Azure CLI using the az login command with a non-root RHEL user account. It will open a web browser requesting you to authenticate to your Azure portal account.

After you have authenticated to the Azure portal, return to the RHEL command prompt. You will see all the available subscriptions. If you have multiple subscriptions, you’ll need to set your subscription id in Azure CLI so it knows which one to use.

To create and launch virtual machines using Azure CLI, run the command below by passing in a VM name, the resource group under which to run the VM, and the storage URL of the image file that was obtained from the steps earlier.

After the command completes successfully, you will be able to see the VM running through the Azure dashboard.

The image builder tool in RHEL is a versatile solution to configure and create custom system images that you can quickly spin up in a variety of cloud and virtualization platforms with just a few clicks. You can also use composer CLI commands if needed to build custom RHEL images programmatically. You can learn more about this here.

With Microsoft’s recent announcement of the general availability of Azure Hybrid Benefit for Linux, moving to the cloud has become even easier. When you’re ready to deploy your workloads into production, you can leverage Azure hybrid cloud benefit to simply convert the pay-as-you-go image you used during your proof of concept testing to bring-you-own-subscription billing.

Get started with Red Hat and Microsoft Azure today.

Bronce McClain is a senior product manager focused on making Red Hat Enterprise Linux (RHEL) the default choice in the public cloud. He joined Red Hat in 2012 and has been a part of the RHEL business unit since 2017. Prior to his focus on RHEL, he worked with the Red Hat Virtualization (RHV) team.