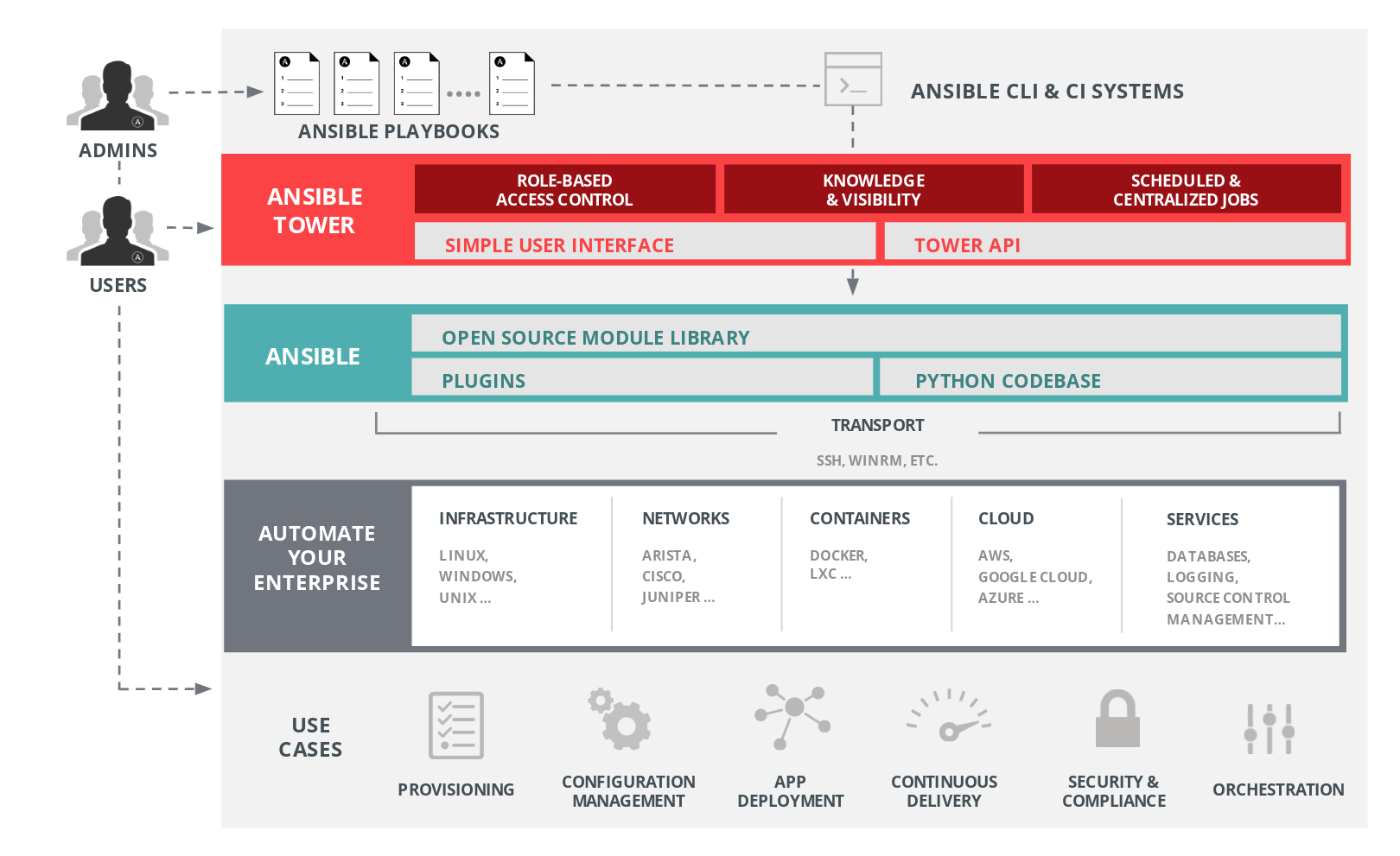 Want to do more with Red Hat's Universal Base Image (UBI)? Download the e-book today!

The first thing to be configured are the Jenkins user credentials to execute Ansible Tower jobs. Add a new Jenkins user by going to the gear icon and select “User”. Choose a user name and password for Jenkins to execute our jobs and save it as a “Normal User”. Leave the other tabs for now.

Create a new Ansible Tower project under the “Project” menu. Choose a name, description and leave the organization field with the default one. In the “SCM Type” combo box, choose git and fill the text input labeled as “SCM URL” with your playbook’s repo URL. For this lab you might fork the Soccer Stats repository. Then click in the tab “Permissions” and add the Jenkins user to the project.

Add the virtual machine to the Tower’s inventory component. To do this, go to “Inventories”, click in “Add” and then:

You have to give Ansible Tower access to your machines. One of the most common ways to do that is using SSH. If you used the Vagrant file from the vagrant-alm repository, after creating the “app” machine, Vagrant will run a playbook to add a Jenkins user and its public key into the “authorized_keys” file of this machine. This user could be renamed to “ansible”, “tower” or anything meaningful to you. Just keep the same name in every step from here.

Now it’s time to put everything together in a job template. Go to the “Templates” menu and click in “Add” to add a new job template. A new page with some fields will appear, fill it in with the following data:

Give it a try to your configuration by running the job clicking on the “rocket” icon in the table listing the job templates. As a value for the “ARTIFACT_URL” parameter, add the Nexus repository URL for the WAR java file that you wish to deploy.

Go to the Jenkins menu again and click on Manage Jenkins, Configure System and locate “Ansible Tower” to set the information about the Tower installation:

Click on “Test Connection” and verify if everything is working fine. If not, verify your connection between Jenkins and Tower machines and check if you set the user jenkins in Tower correctly.

Next, let’s configure the Maven tool to build the Soccer Stats application properly. Go to the Jenkins menu, click on Manage Jenkins, Global Tool Configuration and locate the Maven section. Click on “Maven Installations” and a new one:

You should have a Nexus repository set if you followed the part one of this post. If you don’t have it, provision it using the vagrant-alm repository Vagrant file: “vagrant up nexus_box --provider virtualbox”:

Login to the Nexus dashboard with the user admin and password admin123. Go to the “gear” icon, click on repositories and locate the maven-releases repository. Click on it and update the following fields:

For this integration to work, a new pipeline has to be created at the Jenkins side. A pipeline similar to the first part of this series is going to be used. All the details about it have been explained in that post. If you have any questions about its insides, read the section “Example Pipeline Flow” of part one.

To add a new pipeline flow on the Jenkins side, after having logged in the Jenkins dashboard, click on “New Item” and choose “Pipeline” as the new project with the name “soccer-stats-pipeline-tower”:

The parameter “HOST_PROVISION” doesn’t need to exist. It’s just there to limit where Ansible Tower should deploy the application. In real world scenarios this has to be controlled directly by Tower through the “Inventory” component. This parameter was added for demonstration purpose only. You might want to remove it.

The other parameter, “FULL_BUILD” tells the pipeline flow if the application needs a full build from the source or if it should just take the last binary from Nexus and deploy the application.

At the “Pipeline” section of the project configuration, fill the fields in like:

The most important part of the pipeline that will delegate to Ansible Tower the responsibility to provision the machine and deploy the Soccer Stats application is the “Deploy” stage, since everything else remains like the previous version:

The first part of the “Deploy” stage is pretty straightforward since it’s defining the Nexus repository URL where the application binaries were deployed.

Running the pipeline flow is pretty simple. Click on the pipeline and then “Build with Parameters”. Make sure the virtual machines where the application should be deployed are up and running. Don’t bother installing anything since the playbook will handle this for you. Check the option “FULL_BUILD” and choose which host to provision.

Now the application is ready to be accessed at the URL: http://app.local:8080. If you SSH the machine you’ll see that Java was installed and the soccer-stats service is running locally in “active” state:

Using the previous part of this series, “Integrating Ansible with Jenkins in a CI/CD process” as inspiration, we took a similar path to integrate Ansible Tower with Jenkins. First, it was briefly explained how Ansible Tower works, and then a new Tower installation was created. Having the servers running was a matter of plugin configuration to have Ansible Tower and Jenkins integrated thanks to the Tower REST API.