In Subscription-manager for the Former Red Hat Network User, part 1 & part 2, we covered an introduction to the client-side tooling . This article aims to cover virt-who, a critical component of the server-side Subscription Management tooling.

virt-who is an daemon, installable on 1 or more Red Hat Enterprise Linux systems, which retrieves host-guest mapping information from 1 or more hypervisor management platforms. It does two major tasks:

When do I need virt-who:

If you have a subscription with 'Virtual Datacenters', '4 Guests' or 'Unlimited Guests' in the name, you'll need virt-who. If one of the aforementioned subscriptions are in usage, virt-who is required regardless of the hypervisor. Now, which hypervisor is in use determines how virt-who is configured. Configuring virt-who is beyond the scope of this document. That is covered in the Installation Guide. This document aims to state the current state of affairs, with a slight bias towards how virt-who works with Satellite 6.0 & 6.1.

Where do I find virt-who

virt-who is packaged in a couple of places. It is shipped as a component of RHEL and Satellite. It is shipped in the Satellite Tools repositories (rhel-*-server-satellite-tools-6.*-rpms) so that it can be updated outside of the RHEL release cycle. Otherwise, there is no difference (other than a nominal difference in versions)

Where should I install virt-who?

It is expected that virt-who has access to connect over the network to the hypervisor and Satellite's API port (443). Any of the following can be used as a system to run virt-who on

Remember that the virtual datacenter subscriptions come with the requirement that the hypervisor upon which a guest is residing is known. There is a key difference in behavior between Satellite 6.0 and 6.1 in this area that makes provisioning work more smoothly. For the next two examples, it is assumed that the user has properly setup provisioning, and is using an activation key so that guests can register using a VDC sub. 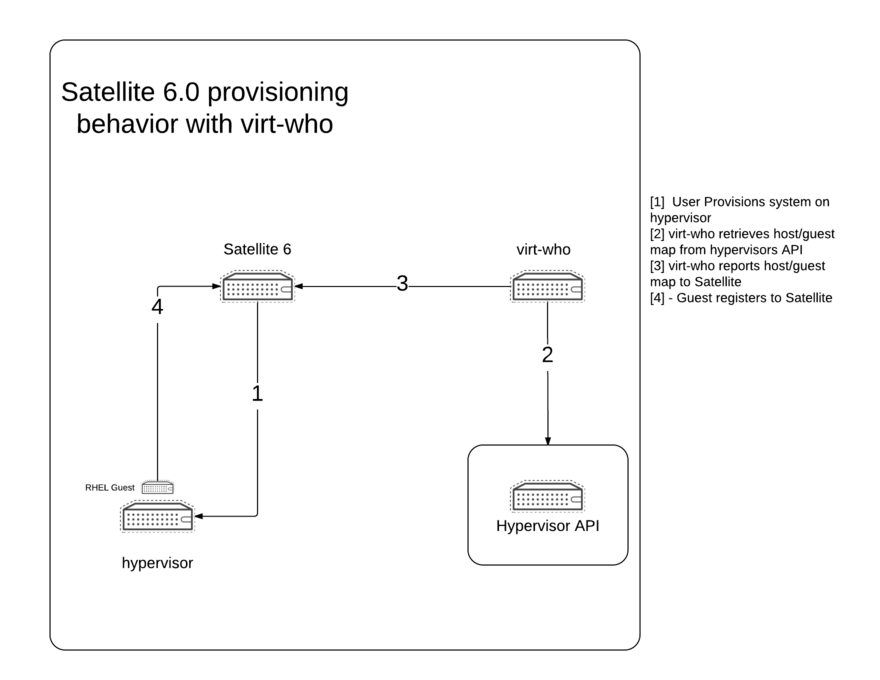 In Satellite 6.0, the process was as follows:

These steps needed to happen in EXACTLY that order. In practice there were a number of challenges with this:

When the above workflow did not happen, system registration would fail because Satellite believed (based on incorrect and/or not-current data from virt-who) that the host/guest mapping for the guest is unknown. Thus, the guest could not use the subscription of the hypervisor. virt-who was in the critical path of registering new systems, and there are a number of variables that 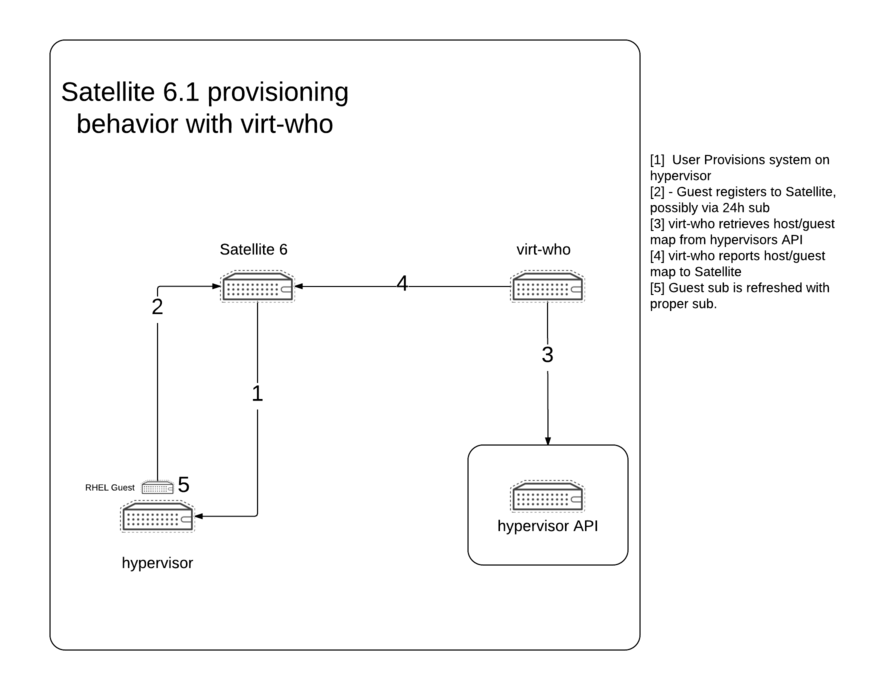 Firstly, virt-who is moved out of critical path of registration. So, what changed? Firstly, Candlepin (the subscription management backed) got a pretty significant change. In Satellite 6.1, a guest attempting to register with a vDC subscription is granted a 24 hour subscription if the host the guest is running on is unknown at registration time. The basic workflow, if envisioned as conversation would appear as such :

This allows transient failures of virt-who to be non-critical and allows provisioning to $JUST_WORK. In this usage, the guest is flagged as yellow within the Satellite interface until its host-guest mapping data is known.

Do I need to change my provisioning workflow?

Possibly. It is expected (and required) to have virt-who properly configured and running so that host-guest mappings are reported. However, it is advised to review your activation keys to ensure that they are having the desired effects. In addition to the 24 hour subscription, activation keys have been made more flexible with the following use-cases:

How do I know if I am using a temporary subscription?

You can verify if a system is using a temporary subscription using the subscription-manager command.

In the world of subscription-management, there are three statuses that a system can be in:

What actions do I need to take if system is using a temporary subscription?

It is expected that virt-who is installed and running so that guests can properly use Virtual Datacenter / Unlimited subscriptions. For a given guest, the possible actions are as follows:

Hopefully, this document helps to with understanding virt-who and its usage in your deployments.