The logic behind this approach is that the virtio driver is a “smart” software element which could contain malicious software logic while the virtio device is a “dumb” element capable of doing only what it’s asked to do. Another reason for this logic is that we traditionally focus on protecting the host from the workload running on it containing the virtio driver (be it a virtual machine (VM) or a container) or protecting workloads from each other.

Emerging hardware frameworks and security frameworks are turning things around by shifting the focus to protecting the virtio driver from the virtio device. One reason for this change is emerging smart NIC technologies that contain virtio devices that are transformed from “dumb” elements to sophisticated elements that are also capable of running malicious software.

Another reason for the change is the emergence of confidential computing/confidential containers approaches, where the focus moved to protecting the workloads (VM or container) from the host itself. This is achieved using emerging hardware encryption technologies such as SEV (ES/SNP), TDX, etc.

As a result, key changes are required in the security boundaries of virtio/vDPA drivers.

In this article we present a high-level overview of work currently being done in virtio/vDPA to support the emerging threats, including actual use cases. We also provide some insight into why using hardened virtio/vDPA devices/drivers is preferable to using vendor-specific devices and drivers as the industry shifts to smart NICs and confidential computing hardware-enabled technologies.

The focus in this article, when relating to virtio, are virtio interfaces spanning from the workloads (VM or container) to dedicated hardware supporting virtio bypassing the kernel (for data plane). This is as opposed to traditional host-to-guest virtio interfaces. These interfaces correspond with the current trends seen in the market of using virtio devices in hardware (networking, storage, etc.).

A virtio device is a device implementation which complies with the virtio specification.

A virtio driver is the driver to control and communicate with a virtio device.

Some vendors implement both the virtio data plane and control plane in hardware and thus do not need vDPA. This approach is called full virtio hardware offloading. To deal with both cases we will use virtio/vDPA when talking about virtio in this blog.

The virtio specification originally aimed to give virtual environments and guests (VMs) a straightforward, efficient, standard and extensible mechanism for using virtual devices rather than boutique per-environment or per-OS mechanisms. As mentioned, with the increasing popularity of virtio, vendors have started to implement and use virtio in non-virtualization environments such as real hardware including smartNIC, accelerators and embedded devices.

The transport layer of a virtio device is a bus layer interface that is used by the driver for accessing the basic facilities. For example, a virtio device implemented with PCI has registered that could be accessed via PCI configuration space or MMIO. And a virtio PCI driver will use those registers to set up the devices.

The device types for a virtio device implement different device logics such as ethernet (for networking), SCSI (for storage), etc.

To answer these questions, we will introduce the threat model for the virtio device and driver which will help us explain different approaches for addressing these issues.

The device perspective trust model of virtio is shown in the following figure: 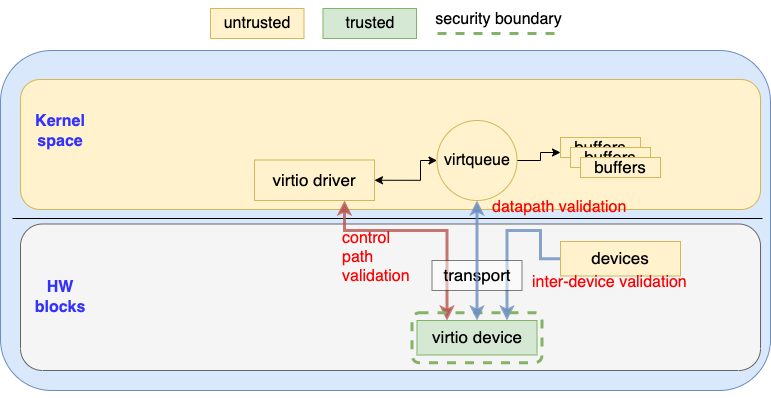 The virtio device needs to validate every request it receives to access facilities such as virtqueues, config space and others, instead of assuming that the virtio driver can follow the normatives of the spec. For example, a malicious driver could try to negotiate reserved feature bits or access a non-existing virtqueue in order to trigger an unexpected logic path of the device. To avoid this, the virtio device must be able to detect and fail such a request

For example, the malicious driver may craft an infinite descriptor chain causing a denial of service (DoS) in the device. To avoid these situations, the virtio device needs to be able to detect such a loop and fail the request. A malicious virtio driver can also attack the device by using illegal buffer metadata (for example, using the reserved value or unsupported combinations) so the virtio device should be able to detect those violations and fail them to mitigate unexpected behavior.

Such a threat model has been a common practice for the virtual device for the past years. Most of the popular virtio backends (such as vhost and Qemu) have been hardened to prevent these kinds of possible attacks from both the guest and other virtual devices. For hardware virtio/vDPA vendors, such practices should be applied as well in order to have a robust device implementation.

Traditionally, since the virtio was born from a virtualization environment, the virtio driver usually trusts the virtio device and assumes the device follows the virtio specification. With recent technologies such as confidential computing, smartNIC and vDPA (where the device logic could be implemented is a less privilege entity), a new and stronger threat model is required as demonstrated in the following figure: 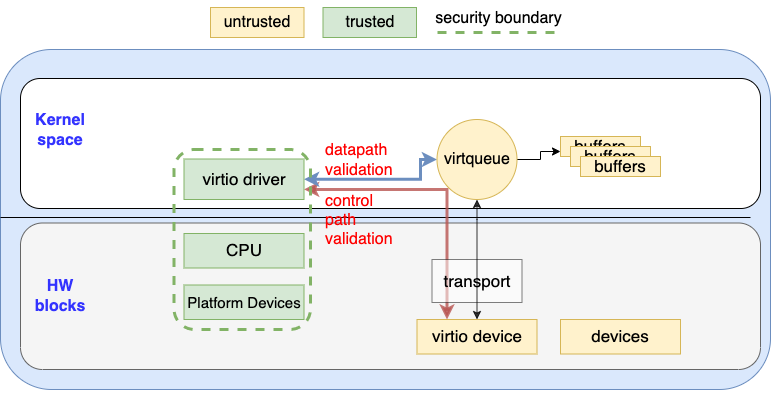 In this threat model, from the virtio driver’s perspective as a software module, it must at least trust some hardware components (green blocks) in order to perform all the necessary protections and checks. This includes:

The security boundary then becomes the green dotted line in Figure 3. This also implies that  we don’t trust the following entities (yellow blocks):

The virtio driver should perform necessary checks on every input that crosses the security boundary:

We believe the threat model described in this section is mandatory for a number of emerging use cases:

Currently, most of the common virtio drivers don't implement the above threat model. However, the work of hardening the different virtio drivers in Linux has begun. It should be noted that we expect the threat model may need to be strengthened or relaxed as the software and hardware technologies evolve.

We believe driver hardening will become a common practice in the future as the threat models evolve. This means the hardening needs to be done not only for the virtio driver but also for other vendor-specific drivers. With this trend, virtio will demonstrate the advantages of its open standard:

By supporting virtio/vDPA devices in their NIC, vendors can build on this work to help protect new hardware they develop from security risks. Instead of creating vendor-specific and closed source implementations of devices and drivers that are more prone to vulnerabilities, approaches such as virtio/vDPA can save time and help vendors focus on their “secret sauce” instead.

In this article we have reviewed two threat models virtio is required to deal with:

For each of the threat models, we have provided some insight into what the virtio community is currently focusing on hardening. We covered a number of key validations which are being added, leveraging the open virtio specifications.

We believe this approach simplifies the process of hardening devices and drivers compared to vendor-specific approaches in terms of testing, maintaining and deploying such solutions.