This is the sixth in Red Hat Ceph object storage performance series. In this post we will take a deep dive and learn how we scale tested Ceph with more than one billion objects, and share the performance secrets we discovered in the process. To better understand the performance results shown in this post, we recommend reviewing the first blog , where we detailed the lab environment, performance toolkit, and methodology used.

To ingest one billion objects into the Ceph cluster, we used COSBench and performed several hundreds of test rounds, where each round comprises of

Ceph is designed to be an inherently scalable system. The billion objects ingestion test we carried out in this project stresses a single, but very important dimension of Ceph’s scalability. In this section we will share our findings that we captured while ingesting one billion objects to the Ceph cluster.

Chart 1 represents read performance measured in aggregated throughput (ops) metrics. Chart 2 shows average read latency, measured in milliseconds (blue line). Both of these charts show strong and consistent read performance from the Ceph cluster while the test suite ingested more than one billion objects. The read throughput stayed in the range of 15K Ops - 10K Ops across the duration of the test. This variability in performance could be related to high storage capacity consumption (~ 90%) as well as old large objects deletion and re-balancing operation occuring in the background.

Chart 2 compares the average latency in milliseconds (measured from the client side) for both read and write tests, as we ingested the objects. Given the scale of this test, both read and write latencies, stayed very consistent until we ran out of storage capacity and high amount of Bluestore meta-data spill-over to slow devices.

The first half of the test shows that write-latency stayed lower compared to the reads. This could possibly be a Bluestore effect. The performance tests we did in the past showed a similar behaviour where Bluestore write latencies are found to be slightly lower than Bluestore read latencies, possibly because Bluestore does not rely on Linux page cache for read aheads and OS level caching.

In the later half of the test, read latency stayed lower compared to write, which could be possibly related to the Bluestore meta-data spill over from flash to slow HDDs (explained in the next section). 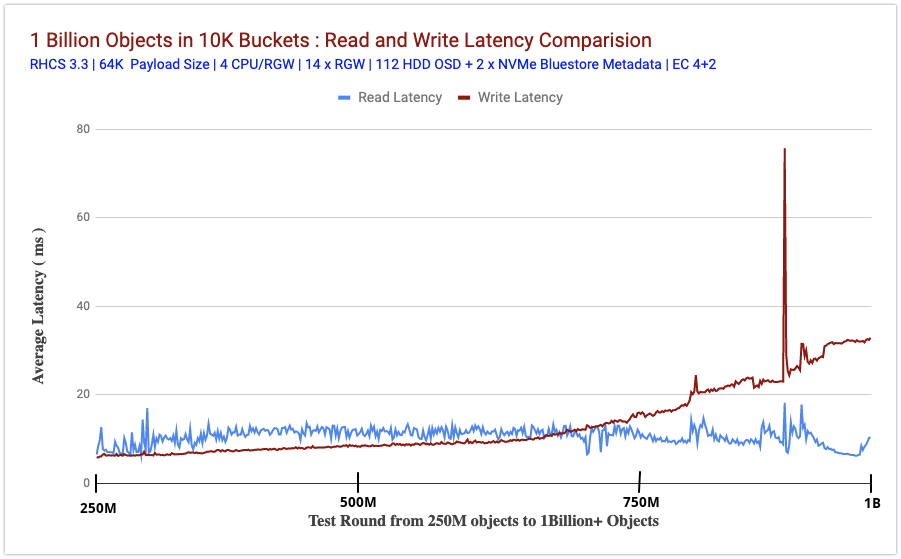 Chart 3 represents ingestion (write operations) of one billion 64K objects to our Ceph cluster through its S3 interface. The test started at around 290 Million objects which were already stored in the Ceph cluster.

This data that was created by the previous test runs, which we chose not to delete and started to fill the cluster from this point until we reached more than one billion objects. We executed more than 600 unique tests and filled the cluster with one billion objects. During the course, we measured metrics like total object count, write and read throughput (Ops), read and write average latency(ms) etc.

From this point, in order for us to reach our goal i.e. ingesting one billion objects, we needed more free capacity, hence we deleted / re-balanced old objects which were larger than 64KB.

Generally, as we know the performance of storage systems declines gradually as the overall consumption grows. We observed a similar behavior with Ceph, at approx 90% of used capacity, aggregated throughput declined compared to what we started with initially. As such, we believe that had we added more storage nodes to keep the utilized percentage low, the performance might not have suffered at the same rate as we have observed.

Another interesting observation, that could potentially be a reason for this declining aggregated performance is the frequent NVMe to HDD spillover of Bluestore metadata. We ingested approx one billion new objects, which generated a lot of Bluestore metadata, By design, Bluestore metadata gets stored in RocksDB, and it's recommended to have this partition on Flash media, in our case we used 80GB NVMe partition per OSD which is shared between Bluestore RocksDB and WAL.

RocksDB internally uses level style compaction, in which files in RocksDB are organized in multiple levels. For example Level-0(L0), Level-1(L1) and so on. Level-0 is special, where in-memory write buffers (memtables) are flushed to files, and it contains the newest data. Higher levels contain older data.

When L0 files reach a specific threshold (configurable using level0_file_num_compaction_trigger) they are merged into L1. All non-0 levels have a target size. RocksDB’s compaction goal is to restrict the data size in each level to be under the target. The target size is calculated as level base size x 10 as the next level multiplier. As such L0 target size is (250MB), L1 (250MB), L2(2,500MB), L3(25,000MB) and so on.

The sum of the target sizes of all levels is the total amount of RocksDB storage you need. As recommended by Bluestore configuration RocksDB storage should use flash media. In case we do not provide enough flash capacity to RocksDB to store its Levels, RocksDB spills the level data on to slow devices such as HDDs. After all, the data has to be stored somewhere.

This spilling of RocksDB metadata from flash devices on to HDDs deteriorates the performance big time. As shown in chart-4 the spill-over meta-data reached north of 80+GB per OSD while we ingested the  objects into the system.

So our hypothesis is that, this frequent spill-over of Bluestore metadata from flash media to slow media is the reason for decremental aggregated performance in our case.

As such, if you know that your use case would involve storing several billions of objects on Ceph cluster, the performance impact could potentially be mitigated by using large flash partitions per Ceph OSD for BlueStore (RocksDB) metadata, such that it can store at up to L4 files of RocksDB on flash. 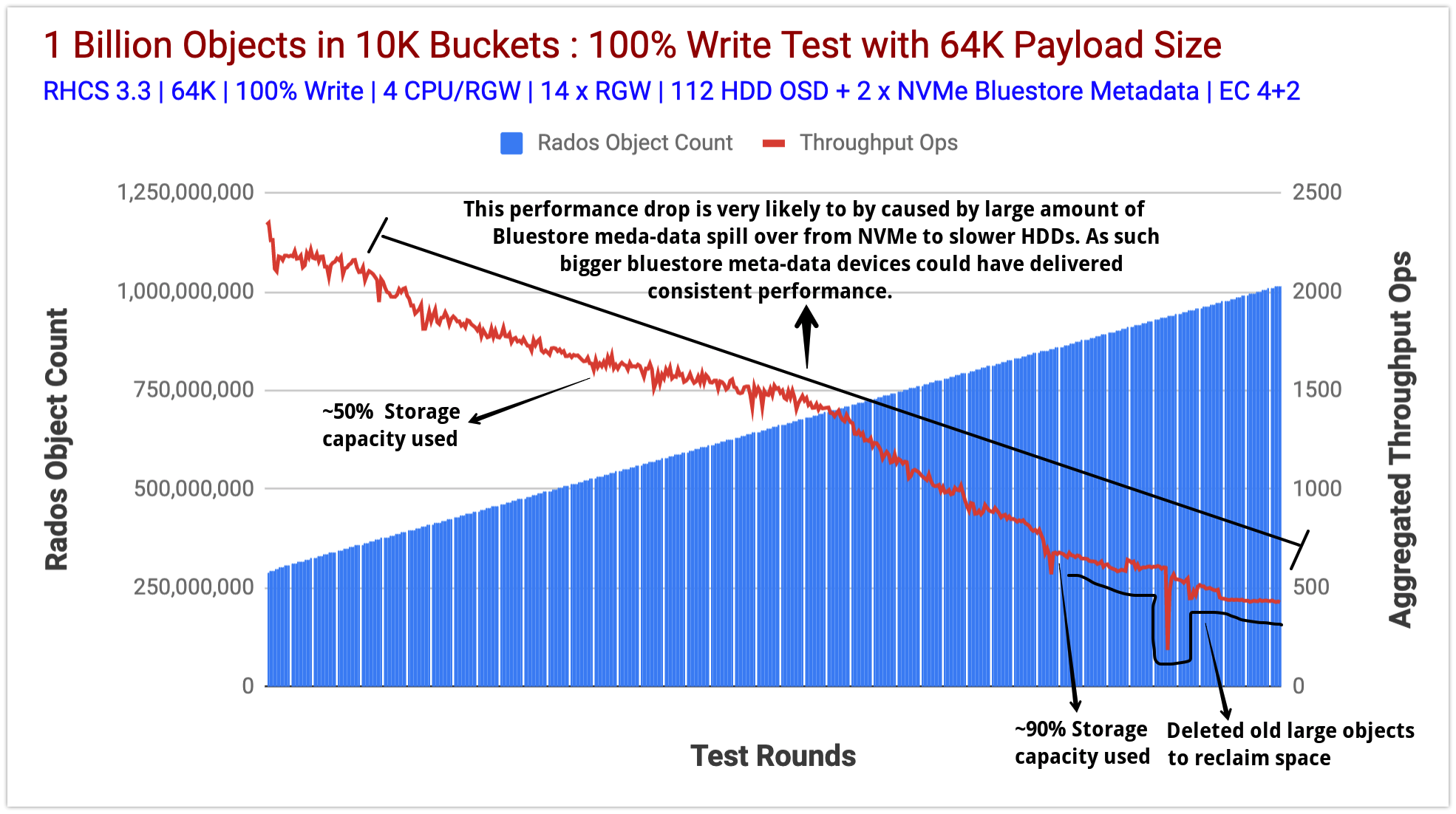 In this section we want to cover some of our miscellaneous findings.

When we ran out of storage capacity in our cluster, we had no choice other than deleting old large objects stored in buckets and we had several millions of these objects. We initially started with S3 API’s DELETE method, but we soon realised that it's not applicable for bucket deletion, as such all the objects from the bucket must be deleted before the bucket itself could be deleted.

Another S3 API limitation we encountered is that it can only delete 1K objects per API request. We had several hundreds of buckets and each with 100K objects, so it was not practical for us to delete millions of objects using S3 API DELETE method.

Tinkering with the bluestore_min_alloc_size_hdd parameter

This testing was done on an erasure coded pool with a 4+2 configuration. Hence by design every 64K payload has to be splitted into 4 chunks of 16KB each. The  bluestore_min_alloc_size_hdd parameter used by Bluestore, represents the minimal size of the blob created for an object stored in Ceph Bluestore objectstore and its default value is 64KB. Therefore in our case each 16KB EC chunk would be allocated with 64KB space, which will cause 48KB overhead of unused space, that cannot be further utilized.

In this post, we demonstrated the robustness and scalability of a Ceph cluster by ingesting one billion plus objects into the cluster. We learned about various performance characteristics associated with a cluster which is at its maximum capacity as well as how bluestore meta-data spill over to slow devices can shave performance, with mitigations that you can opt for while designing your Ceph clusters for scale. In the next blog, we will look at some random performance tests done on the cluster.