An estimated 15 billion devices run Java™ worldwide . Until January 2019, no one had to pay for access to a current Java Virtual Machine (JVM), but Oracle implemented a significant change to its release cadence and support model. Oracle JDK is no longer free for production workloads and patches, leaving organizations with a choice to either pay Oracle for continued production support and updates for Oracle JDK, adopt OpenJDK and upgrade every six months, or migrate to an alternative OpenJDK implementation.

The impact to the Java community is tremendous because 70% of Java developers use the Oracle JDK JVM. The Red Hat® build of OpenJDK is a free and open source implementation of the Java Platform, Standard Edition (Java SE). It is an alternative that will allow your organization to stabilize and standardize your Java environments for years to come with little to no transition effort.

The Red Hat build of OpenJDK offers a number of features and benefits.

Red Hat Application Migration Toolkit provides a set of utilities to identify and plan the migration of your existing Java codebase to OpenJDK.

All Red Hat distributions of OpenJDK are supported for development and production for all Java workloads, giving you the confidence to develop, test, and deploy in Windows or Linux-based environments. The JRE2 and JDK distributions are made available via rpm and zip files. Red Hat expects to deliver four updates per year, approximately three months apart, for the OpenJDK 8 and 11 distributions.

Support for the Red Hat build of OpenJDK is included or available via the following subscriptions:

OpenJDK and Oracle JDK are implementations of the same Java SE specification. In 2017, Oracle committed to open sourcing the remaining Java SE tools with the goal of making Oracle JDK and OpenJDK interchangeable. While some minor differences still exist, OpenJDK 11 and Oracle JDK 11 are now functionally interchangeable. The builds are nearly identical except for a few features (e.g., Advanced Management Console) that are shipped separately via the Java SE Advanced commercial offering.

The Red Hat build of OpenJDK is also baselined from the OpenJDK project. All of the additional work done by Red Hat is implemented first in the OpenJDK community, which means our customers can run their applications on a certified OpenJDK distribution. The Red Hat build has passed the Java Technology Compatibility Kit (TCK) from Oracle to ensure it is in compliance with the Java specification.

Our productization process includes activities such as feature engineering, security, testing, creation of deployment artifacts, product integration, documentation, and more. Red Hat is fully committed to the open source community and is the second leading contributor (behind Oracle) to the OpenJDK project. Red Hat has provided many certified solutions over the years, and we contribute most of our productization work to the OpenJDK upstream project.

Red Hat’s history with OpenJDK dates to 2007, when we became the first major software vendor to contribute to the OpenJDK community. Red Hat is also a member of the OpenJDK Governing Board and will serve as the steward of the OpenJDK 8 and OpenJDK 11 projects after a transition of leadership from Oracle. 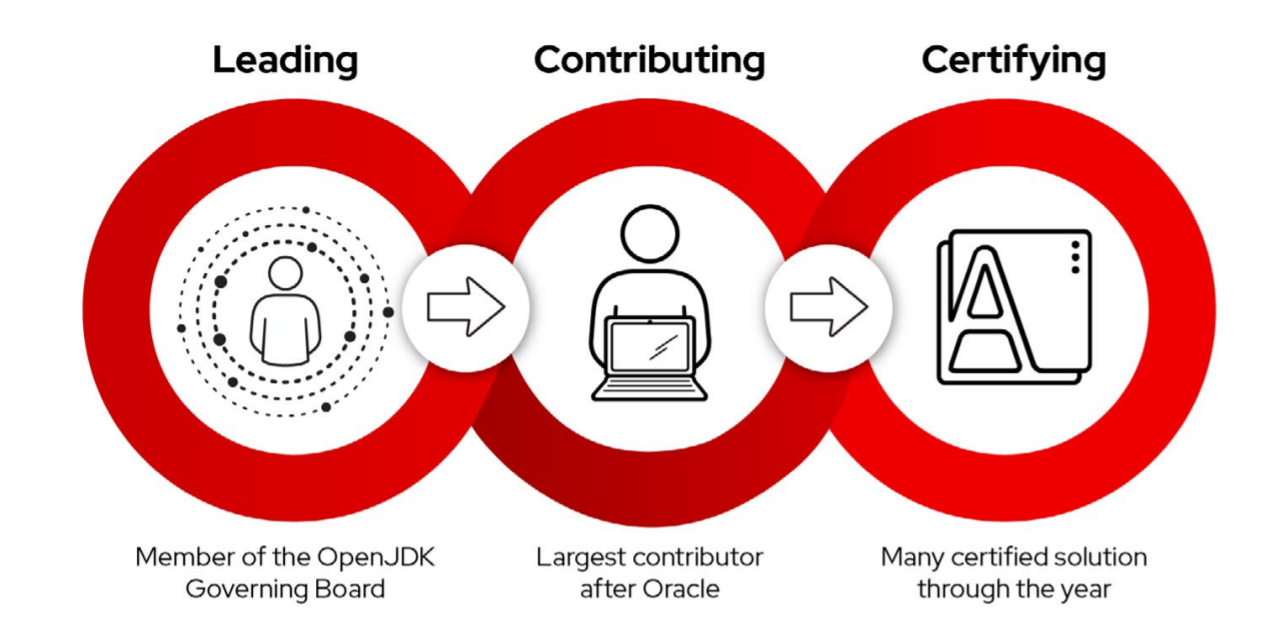 Red Hat is distributing Mission Control for OpenJDK 11, and is working on supporting OpenJDK 8.