After two years of working through the pandemic, organizations around the world are settling into new ways of operating. COVID-19 forced companies to figure out how to work remotely. They had to learn how to meet immediate customer needs, while adding the agility to adapt to a still-unknown future. However, this way of working is something that open source communities have been doing for more than 25 years. These communities, as well as the companies that participate in them, had a head start on distributed collaboration. The open source solutions built from this innovation are now being looked to as the blueprint for other entities.

What we found as we embarked on our fourth annual “The State of Enterprise Open Source: A Red Hat Report’’ is that not only is the open source development model showing no signs of slowing down, it has actually accelerated during the pandemic. As proof points, we see more companies bringing products to market based on open source projects while communities like Operate First, Fedora, and Kubernetes are thriving.

The report, which explores why enterprise leaders are choosing the open source development model and technologies built with this model, found that 92% of IT leaders surveyed feel enterprise open source solutions are important to addressing their COVID-related challenges. This is not surprising to me, considering the moves I saw many businesses make towards the open hybrid cloud even before the pandemic. Whether an intentional architecture choice or a result of rapid market changes, cloud computing and always-on services built using the open source development model and open source code are increasingly crucial to nearly every organization regardless of industry.

The open hybrid cloud enables innovation, providing the framework that brings together applications running on premise whether because of legacy or by design, with the best of any cloud provider (private or public) all based on open source. This trait is also reflected within the report, as outside of the pandemic challenges we saw 95% of respondents say that enterprise open source is important to their organization’s overall enterprise infrastructure.

Why? It’s because of the innovation and agility the model makes possible. Some technology persists for decades if not longer, and the decisions IT leaders are making today will impact their organizations’ nimbleness and market response down the road, whether it’s in two years or 20. As new infrastructure is being built out, you can’t leave behind existing systems and tools. You need products and services that work with them. That’s the value of open source. As we said in the very first report: “The question is no longer whether your enterprise should adopt open technologies; the question is when—and how.”

There’s so much to digest in this report, but what I hope you will take away is that while the open source development model may have started in the playground of developers, hackers and visionaries decades ago, we’ve moved far past that. It’s now a mainstream part of commercial software development and the engine for consistent innovation—from the server room to public clouds to the edge and beyond.

Commentary throughout the report is written by Gordon Haff, a technology advocate at Red Hat. Gordon writes about technology, trends, and their business impact. He is a frequent speaker at customer and industry events. He has authored books including How Open Source Ate Software and From Pots and Vats to Programs and Apps.

1296 Total interviews were conducted with IT leaders worldwide:

Respondents were unaware that Red Hat was the sponsor of this survey. Respondents had to influence purchase decisions within their organization in app development, app infrastructure, cloud, storage, middleware, server OS, or virtualization. Respondents had to be familiar with enterprise open source, and have at least 1% Linux® installed at their organizations. EMEA includes the United Kingdom, Germany, and the United Arab Emirates. English-speaking APAC includes Australia, New Zealand, Hong Kong, and Singapore. LATAM includes Argentina, Brazil, Chile, Colombia, Mexico, and Peru. Research conducted in 2021.

Last year, for the first time in this annual survey, we asked IT leaders if they cared whether their vendors contributed to open source projects.

We were not sure what the result would be. However, we suspected responses would be somewhere between indifference and mildly positive. We were wrong. In fact, our respondents were overwhelmingly more likely to select vendors who contributed to open source communities.

This year, we asked the question again. Again, the positive response was overwhelming, with a total of 82% almost evenly split between saying they were “much more likely” and “somewhat more likely” to select a contributing vendor.

82% of IT leaders are more likely to select a vendor who contributes to the open source community.

When deciding on a software vendor, what impact does knowing that they contribute to the open source community have on your decision?

While Red Hat understands the many benefits our customers (and more broadly, the open source community) gain when we and others contribute to upstream communities, we also wondered why the IT leaders we surveyed cared. So we asked them.

Responses were roughly evenly split among the choices provided. Most reflected how full participation in the open source development model by default allows a vendor to build expertise and to otherwise influence development roadmaps in ways that benefit users directly.

At the same time, we were pleased to see that one top response identified the value of contribution as helping “sustain healthy open source communities.” Sustainability is perhaps a subtler point than the first-order benefits. It is gratifying to see that so many respondents appreciate the importance of healthy open source projects.

Why are you more likely to select vendors that contribute to the open source community?

Security is a major benefit of enterprise open source

89% of respondents believe that enterprise open source software is as secure or more secure than proprietary software. Overall, the numbers told a story similar to last year’s survey, although the “more secure” choice was up by four percentage points. Anyone who has spent time in the IT industry will recognize that this is a significant shift from mainstream perceptions about open source software from a decade or so ago when open source software security often surfaced as a weakness.

89% of IT leaders believe enterprise open source is as secure or more secure than proprietary software.

Which of the following best completes this statement? Compared to proprietary software, I think enterprise open source software is _____.

But what makes enterprise open source such a benefit with respect to security? That was another new question we dug into this year.

Interestingly, answers that historically often came up in open source security discussions were at the bottom of the list. Neither the idea that “given enough eyeballs, all bugs are shallow” (to quote a long-standing open source aphorism) nor the ability to audit the code directly were as important to respondents as other benefits. What we might call the mythology of open source security, both for better and worse, seems to be on the way out.

Other top benefits reflect the confidence that the IT leaders we surveyed have in how enterprise open source software is created and delivered in general. For example: “Security patches are well-documented and can be scanned for” (one of the aspects of software supply chain security) and “vendors make vulnerability patches for enterprise open source available promptly.”

Why security is a benefit of enterprise open source

In what ways is security a benefit of using enterprise open source solutions?

Software may be eating the world. But, increasingly, it is enterprise open source software that is doing most of the chewing.

The trend is not subtle. Especially when you consider the fact that enterprise software deployments are not ordinarily known for rapid change. 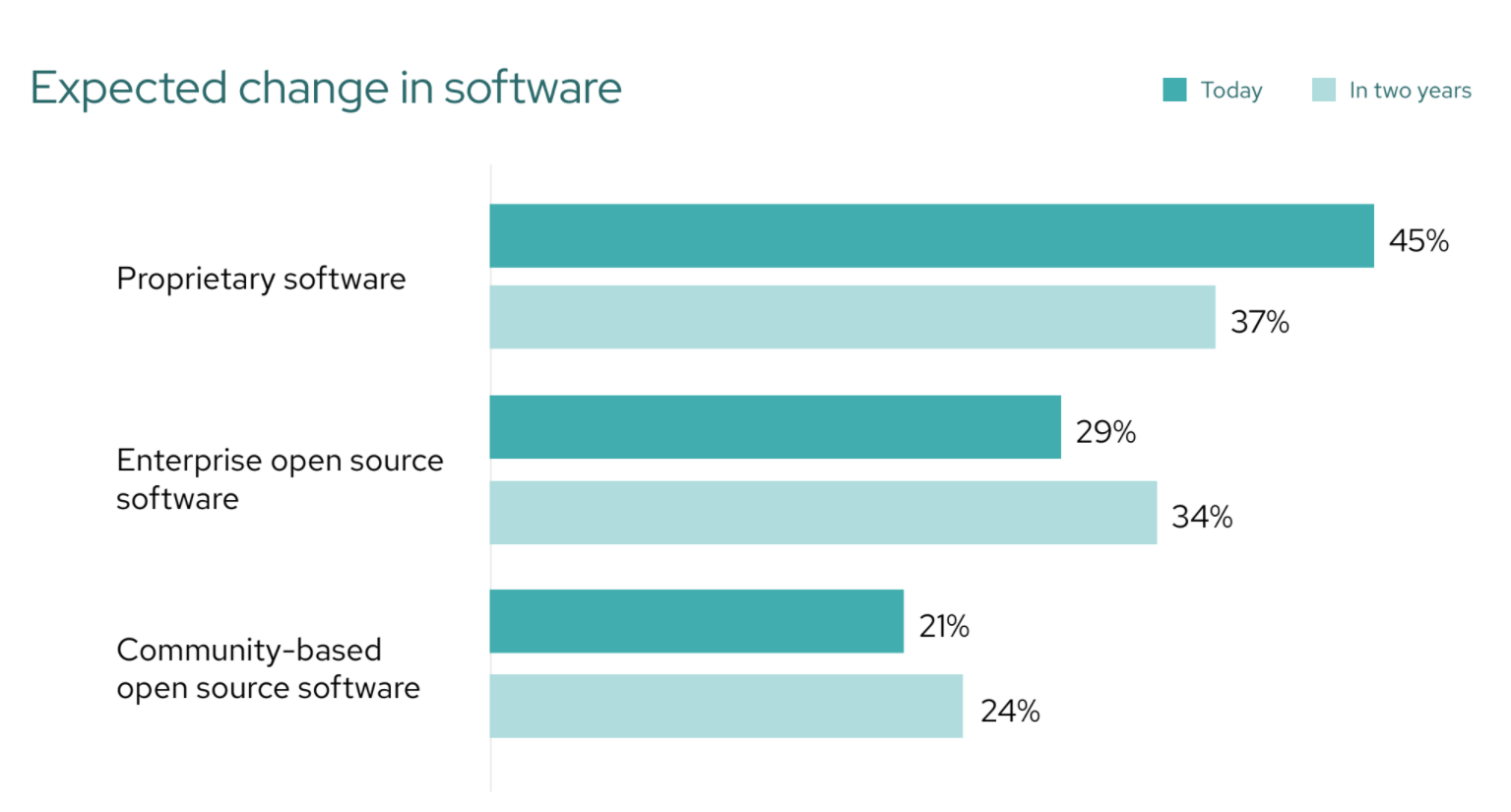 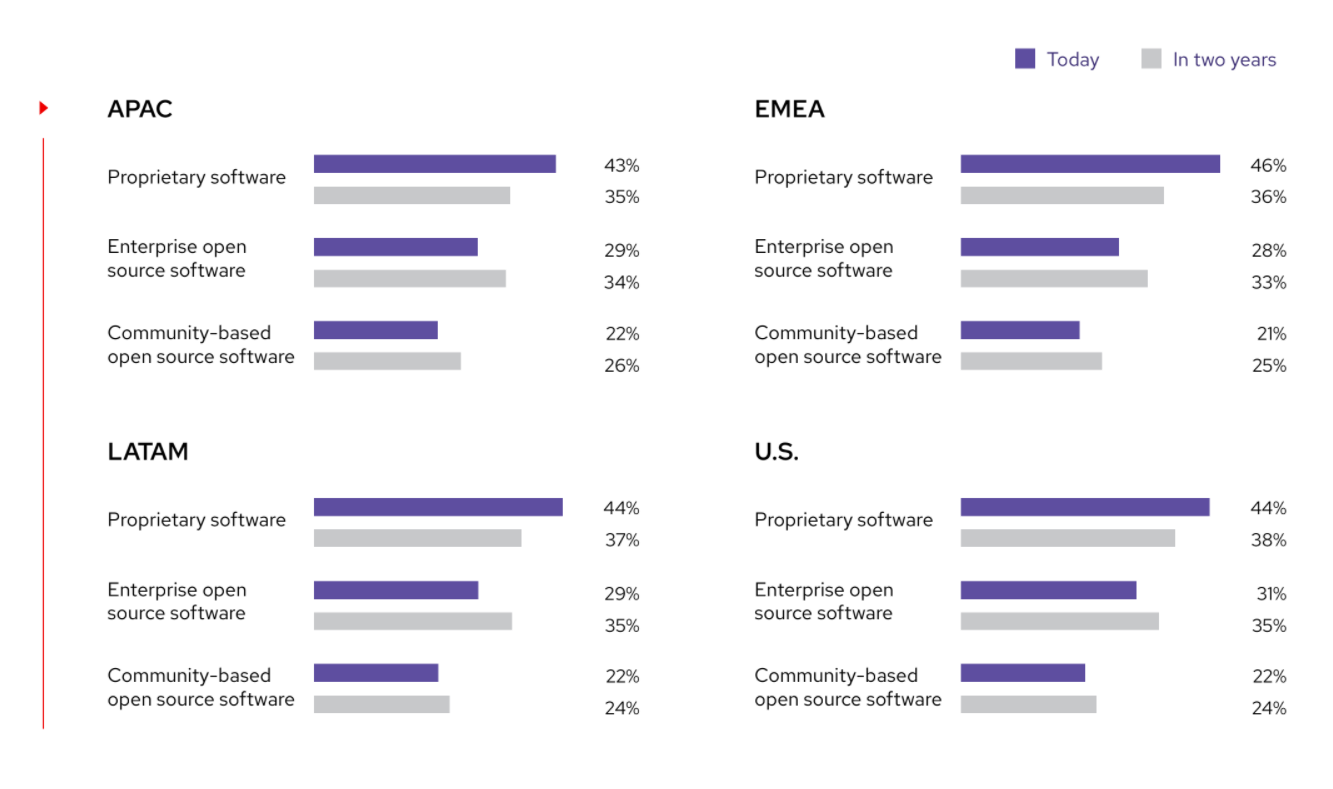 Approximately what percentage of your organization’s software is proprietary vs. open source now / two years from now? (‘Other’ responses not reported.)

IT leaders are currently making good use of emerging technologies

Which of the following best describes your company’s use of these emerging technologies?

80% of IT leaders expect to increase their use of enterprise open source software for emerging technologies.

Do you expect your organization’s use of enterprise open source software for emerging technologies to increase, decrease or stay the same over the next 2 years?

77% of IT leaders have a more positive perception of enterprise open source than they did a year ago.

How has your perception of enterprise open source changed over the past year, if at all?

That still happens, but there are also whole new categories of software that didn’t exist to any significant degree in the proprietary software world.

For what is your organization using enterprise open source solutions or technologies?

Containers, Kubernetes for the associated container orchestration, and the vast number of complementary cloud-native open source projects may be the best examples of new categories of software. It is a software ecosystem that’s growing and shows no signs of slowing down. 70% of IT leaders we surveyed work for organizations that use Kubernetes and almost a third plan to significantly increase their use of containers over the next 12 months.2

70% of IT leaders work for organizations that use Kubernetes.

Does your organization use Kubernetes?

All this infrastructure modernization (along with other leading uses of enterprise open source such as application development and digital transformation) does come with a downside though. When asked about barriers to adopting containers, the top obstacle varied slightly by geographical region but they were mostly either the lack of development staff, overall resources, or necessary skills. This is consistent with what we are seeing both anecdotally and in other surveys we have conducted.

What barriers have prevented you from adopting containers?

Top barriers to broad enterprise open source adoption are roughly similar to the results from prior years. They include concerns such as the level of support, compatibility, and security. These closely mirror some of the IT leader concerns we hear about commercial proprietary software. 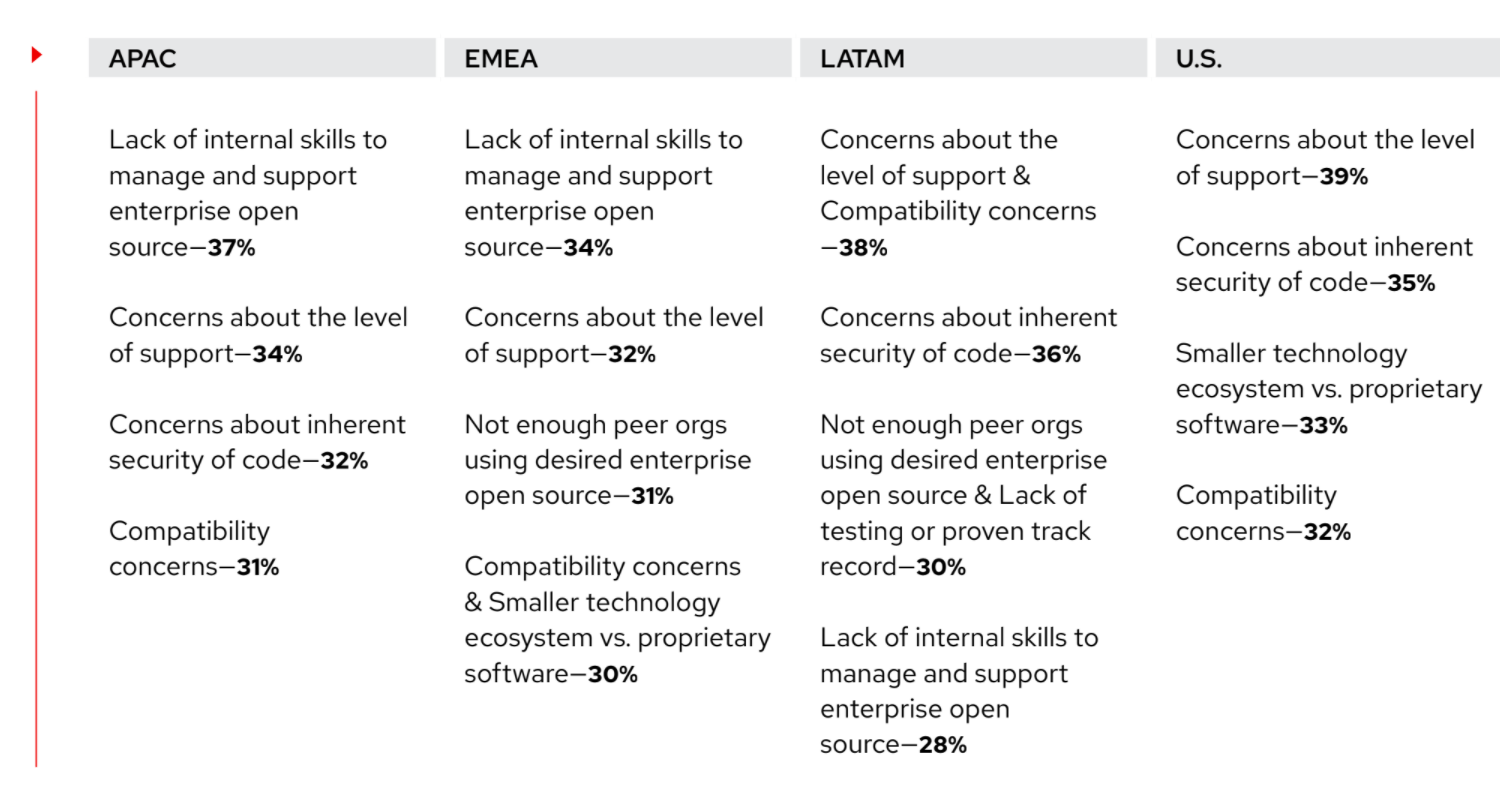 What would you consider to be the top three barriers to using enterprise open source solutions or technologies?

The benefits are broad and strategic

“Open source is an engine of innovation for the financial industry. In 2001, when we migrated from UNIX to Linux, we didn’t know we were changing our business. From standard foundations that increase productivity to the communities that foster the next frontiers of technology, open source opens doors to the future.”

This year’s top two benefits? Better security and higher quality software. By contrast, lower TCO has declined dramatically in importance. It is now near the bottom of the benefits list in ninth place. 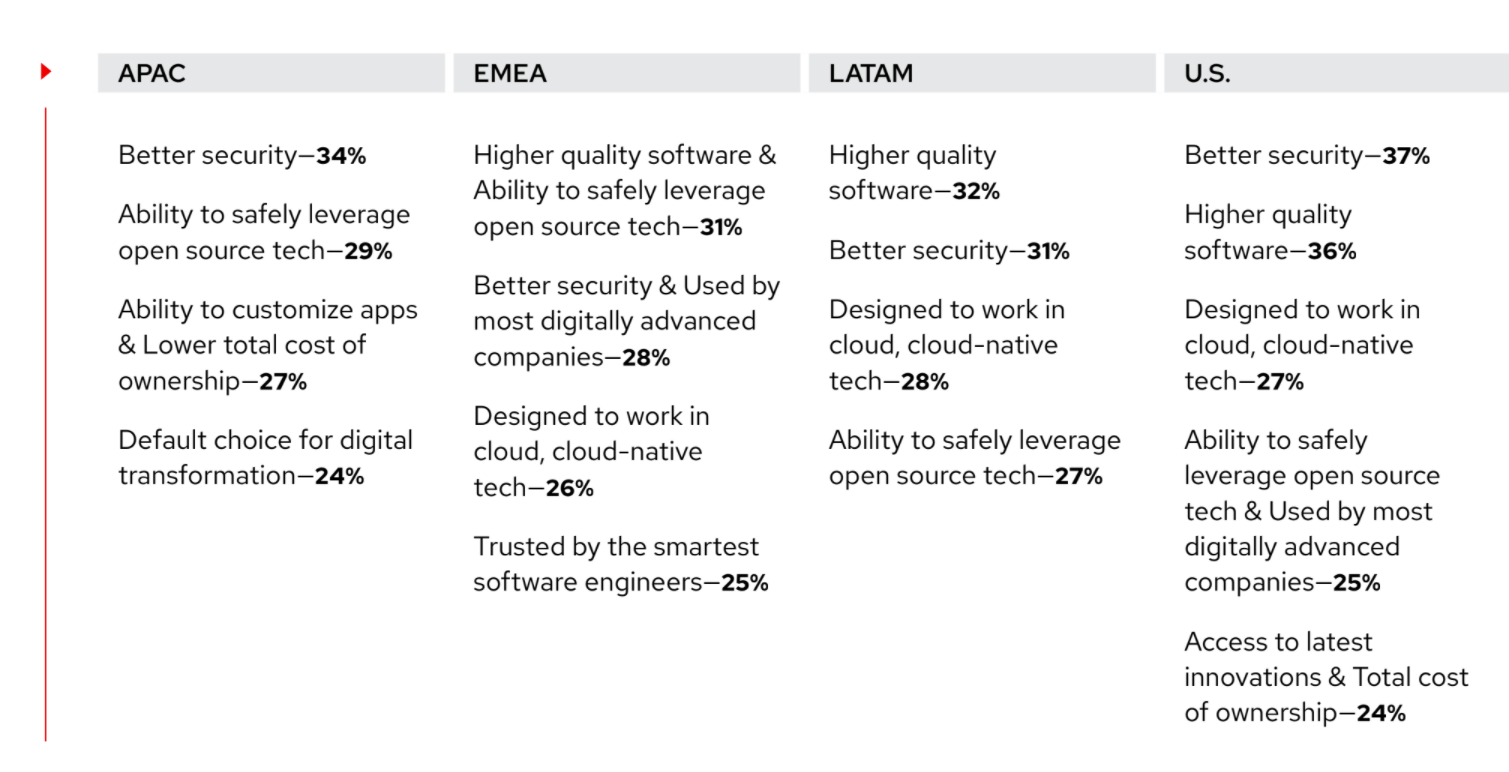 What would you consider to be the top three benefits of using enterprise open source solutions or technologies?

“We see open source leading the way in technology innovation and accelerating digital transformation in the region—and globally.”

Enterprise open source as a strategic asset carries over to its associated attributes identified by the survey. The story here is that the attributes are not about any single thing. Rather, they are almost uniformly positive across the board. More than 75% agreed that enterprise open source provides flexibility, ensures their organization has access to the latest innovations, has been instrumental in their organization’s ability to take advantage of hybrid cloud architectures, and is a key part of their security strategy. That covers a lot of ground. 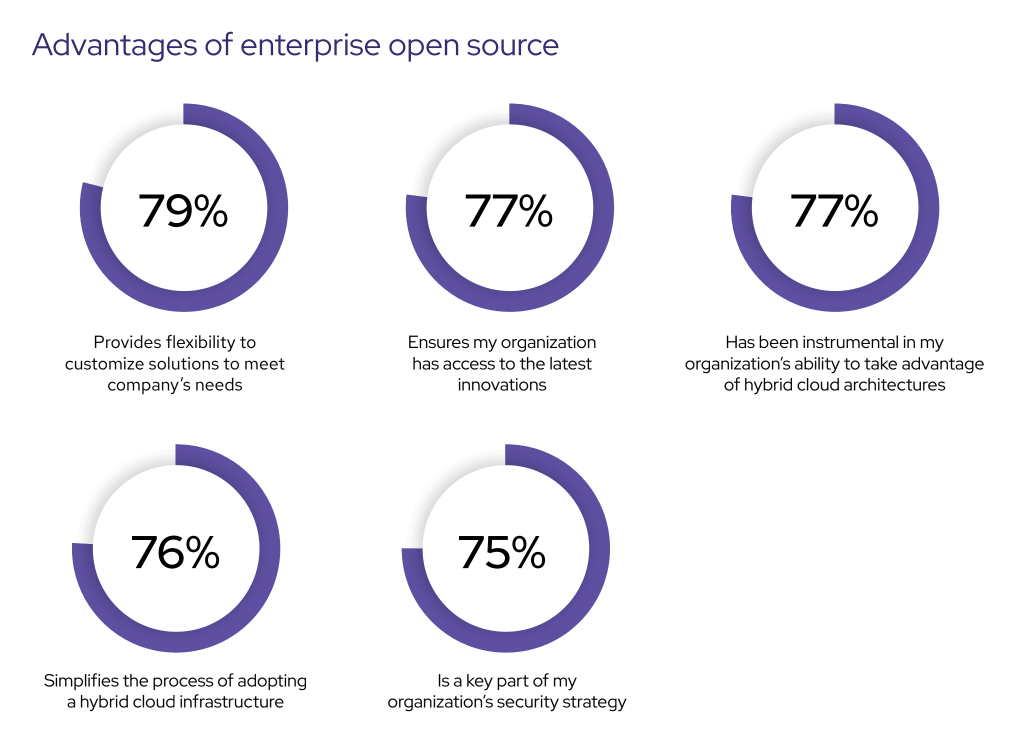 How much do you agree that enterprise open source…?

We surveyed IT leaders across several key industries. Download the infographics to see an overview of what we learned.