In our last post we introduced Davie Street Enterprises (DSE), a fictional company at the start of its digital transformation. We'll be looking at some of their problems, and solutions, through a series of posts.

During the root cause analysis of the outage, it was discovered that human error in a tracking spreadsheet led to the same IP address being allocated to two different systems. Like many companies, DSE was using spreadsheets to track and allocate IP addresses, a tedious and error prone process. DSE soon realized that an automated system to track IP addresses is critical.

Incidents like this were not uncommon at DSE. They also faced growing competition from competitors, who had fully embraced a digital transformation and recently introduced new virtual widgets (VWs). Something needed to be done.

DSE was under pressure to reduce costs, improve operational efficiencies through technology and deliver on the promise of VWs. She needed someone with the expertise to drive this effort, so she hired Daniel Mitchell as Chief Architect. One of his first tasks would be to lead DSE’s automation efforts as part of the overall digital transformation. DSE was already a customer of Red Hat and Daniel had collaborated with Red Hat on several occasions, so he hired us as consultants.

Gloria Fenderson, Sr. Manager of Network Engineering at DSE, was in charge of the original WAN migration project. She knew first-hand how manual changes and updates could lead to outages and was eager to embrace automation. When the head of IT operations, Ranbir Ahuja, asked her to work directly with Daniel on the automation plan, she jumped at the opportunity to help guide DSE’s digital transformation.

She worked with Mitchell to make sure any proposed solutions met the company’s needs. They met with department heads and front-line IT staff to formulate a plan. After some initial demos and internal conversations, they decided to use Red Hat Ansible Automation Platform as its automation platform of choice. DSE has many disparate systems and Ansible’s agentless architecture makes it easier to integrate into existing systems.

The networking engineering team, headed by Fenderson, is in charge of keeping track of IP assignments. Besides the manufacturing plants, DSE also has hundreds of regional sales offices whose IT operations they manage. Keeping track of these IP assignments with a spreadsheet was almost a full time job. Care had to be taken to not duplicate IPs, which often involved multiple engineers double checking assignments. She wanted to automate this process to reduce errors and free the network engineers to work on bigger projects. Because IP Address Management (IPAM) is so closely tied to DNS and DHCP, they also needed a solution that was well integrated with these services.

Infoblox, a leading provider of DNS, DHCP, and IPAM (DDI) enterprise solutions and real life Red Hat partner, was brought in to provide proof of concept for a centralized solution. Infoblox is also Red Hat Ansible certified, which means their Ansible modules are tested and backed by Red Hat and Infoblox support.

A tiger team, dubbed Alpha, was formed from Red Hat and Infoblox consultants and DSE network engineers to work on the proof of concept.

First, they installed the infoblox-client on the Ansible Tower server. This installs the Python libraries necessary for Ansible to communicate with NIOS.

They then assigned some default values for testing. These can be overridden later in Ansible Tower with a survey.

They created a new file called nios_add_ipv4_network.yml.  The parent container, 10.0.0.0/16, was created during the initial setup of NIOS.

While the Alpha team could have created the network with the nios_network module, the module does not support assigning the network to an NIOS grid member at this time.. For that, they needed to use the Infoblox API and the Ansible uri module to make the change.

They used a jinja2 template to create the JSON file necessary for the change. They creates a file called templates/new_network.j2

These next tasks will create the network in NIOS. They added them to nios_add_ipv4_network.yml.

The output from the template will create a json file that will look like this:

Now that they had a network established, they created a DHCP range using the NIOS REST API.

Then added this to the playbook:

Now that they had a new network created and assigned a DHCP range, they added in some details with the nios_network module. Here is where they configured DHCP options and updated the extensible attributes:

Since there was a change, NIOS needs to restart the DHCP service. The section grid/b25lLmNsdXN0ZXIkMA may differ for your installation. Refer to the Infoblox NIOS documentation on how to determine this value in your own environment.

Next, they created the json file restart_dhcp_service.json

In Ansible Tower, they created a job template and survey so anyone can create a new network in NIOS. They created a new inventory in Ansible Tower with localhost as the host. The contents of the nios.yml file were added as extra variables to the inventory.

The team decided to use a private GitHub repo for source control and created a project in Ansible Tower that will pull in that repo.

They then created a job template for the new playbook.

Next, they added a survey so a user can choose where they need the new subnet created and customize any extensible attributes, satisfying the self-service requirement. A feature enhancement to the playbook would be to add logic that restricts where subnets can be created based on state, region, or other criteria. An example survey is shown here. 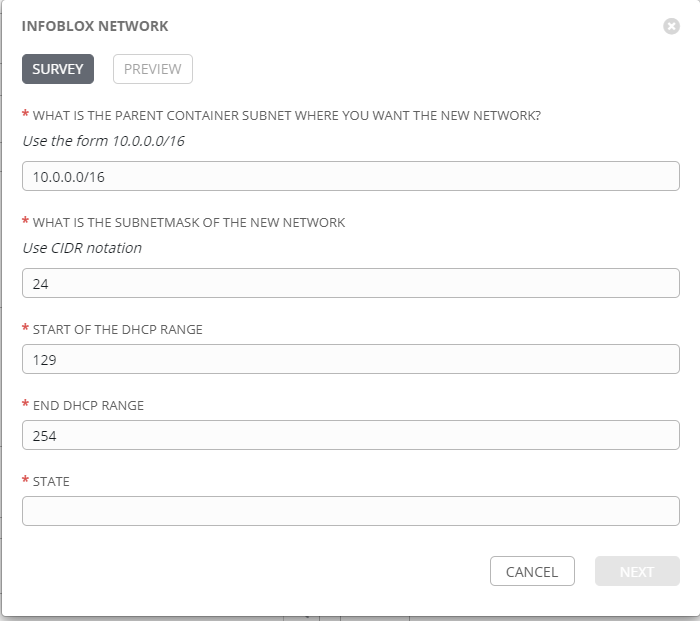 Before testing the job template, they checked NIOS to see what existing networks are configured and found that 10.0.12.0/24 is the next available network. 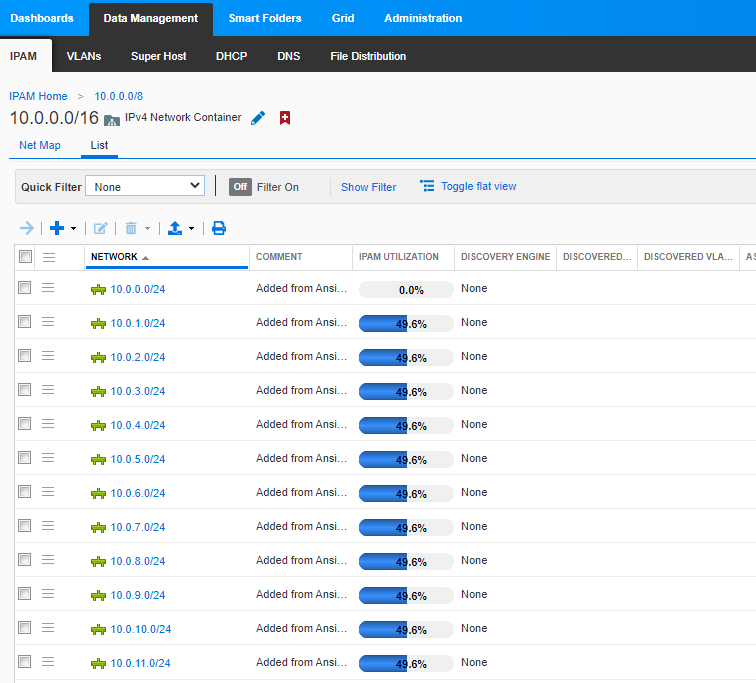 Back in Ansible Tower, they set the verbosity of the job to 1 and pressed launch. 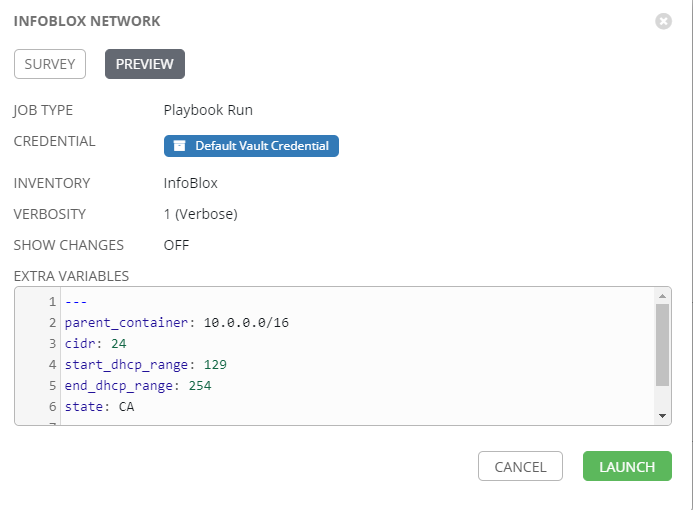 The team then checked the next available network in the output:

In NIOS, they examined the network to verify the changes had been made. Success. 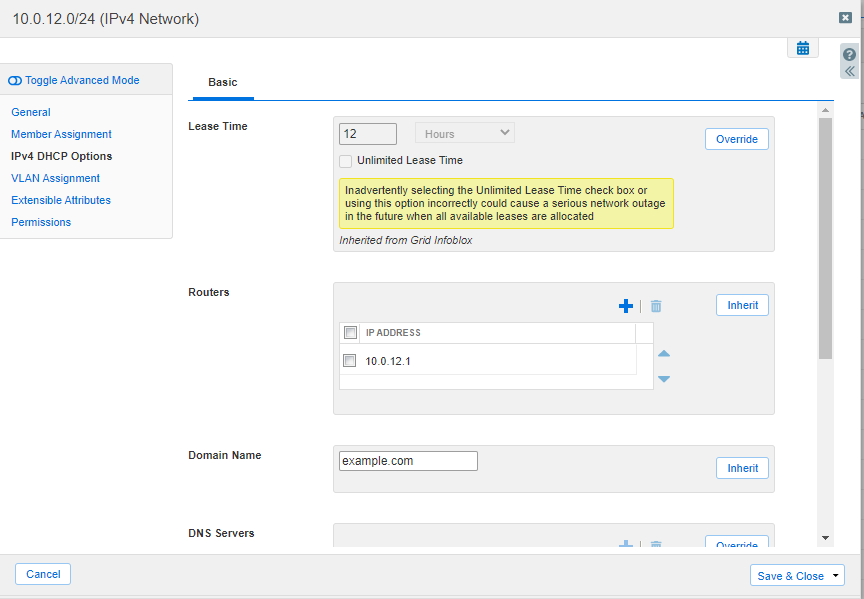 After presenting the solution to DSE management, Mitchel and Fenderson are given the go-ahead to roll out the Infoblox NIOS solution to the entire organization. They can work with Red Hat and Infoblox to further develop the IPAM solution and migrate existing data into Infoblox. Now that IT leadership at DSE has a solid understanding of automating IPAM, they decide to roll out Ansible to other segments in the company, starting with their F5 BIG-IP instances. Keep up to date on DSE's journey here.