Red Hat Ansible Automation Platform is a framework for building and operating IT automation at scale. The platform includes many of the tools you’ll need to implement automation across your organization, allowing you to simplify and centralize control of your infrastructure.

6 reasons to use Insights for Ansible Automation Platform

Here are some highlights on how you can use Insights for Ansible Automation Platform in your organization’s automation efforts.

Top Reports are built-in Insights reports that we’ve included based on customer feedback received over the years.

To start, this tool ships with six reports:

And these are just the beginning—new reports will be added over time, based on ongoing feedback and as new features are built to support them. 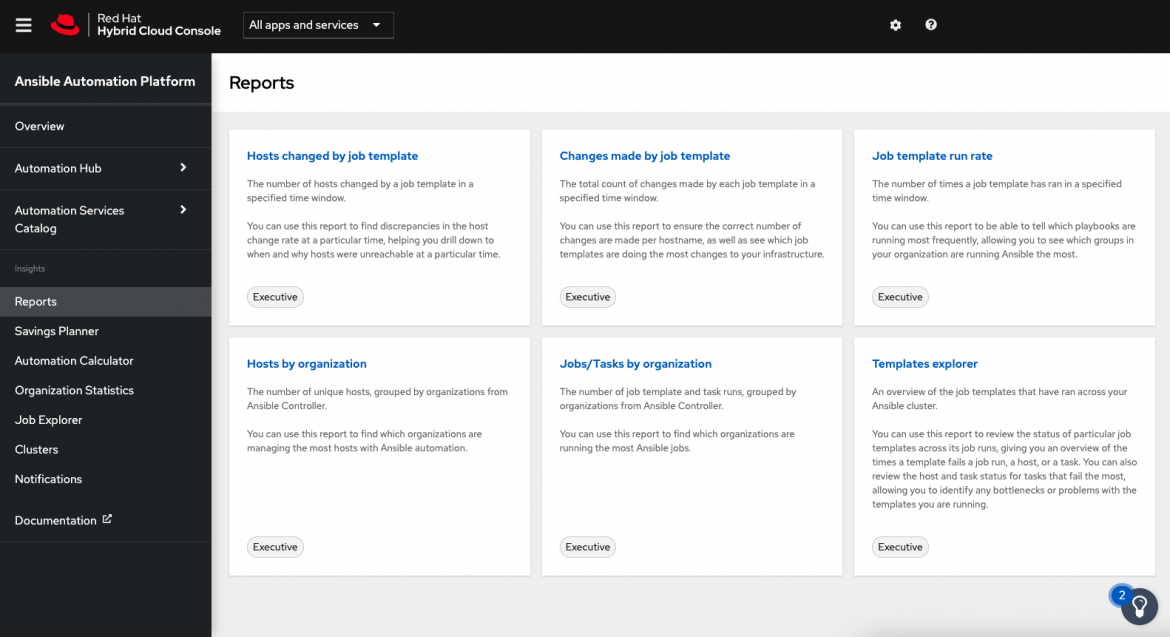 Here’s a breakdown of a couple of the most recent reports we’ve added:

These two reports show Ansible hosts, jobs and tasks usage broken down by organization. This information was previously captured in the Organization Statistics page, but we discovered that our users wanted to see trending lines on those graphs (as opposed to grouped bars), so we decided to migrate the visualizations to a set of reports.

Here’s an example of the Hosts by organization report that also shows some of the filtering capabilities you can use to drill down into subsections of the data.

Similar to our popular Job explorer page, the Templates explorer report gives you a birds-eye view on template usage across all Controller clusters. You can also drill down into status information for Jobs, Hosts, and Tasks, as well as identify potential bottlenecks and optimization opportunities in the “most failed tasks” breakdown chart.

If needed, you can export these six reports to PDF to share with users outside of the Ansible Automation Platform. This feature is accessible by an application programming interface (API) as well, so you’ll be able to schedule PDFs to be automatically generated and sent via email.

Here’s a quick demonstration of downloading a PDF version of the Hosts changed report.

Being able to clearly understand and communicate the potential and actual return on investment (ROI) of automation projects is a key factor in planning and decision making.

The Automation Savings Planner can help you plan and analyze the potential efficiency improvements and cost savings of your automation initiatives. The planner walks you through the process of developing a projection of how much time and money you could save by automating a specific IT task. 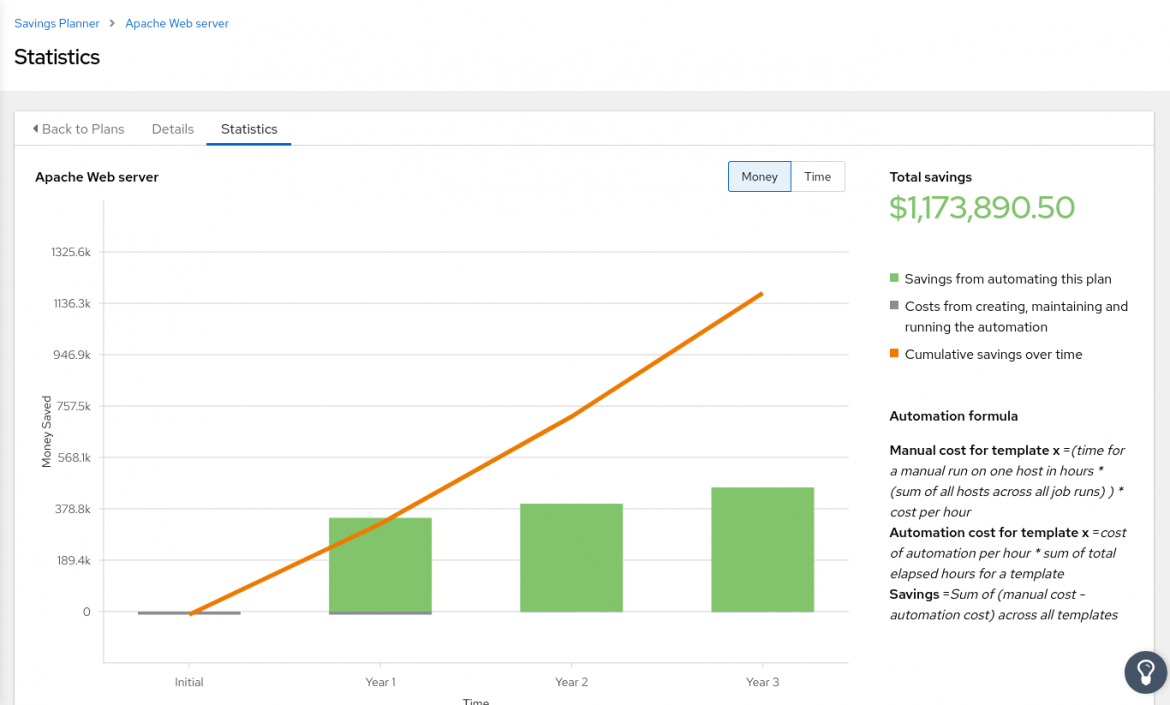 And after you’ve started to implement some of these plans, the Automation Calculator gives you perspective you need to quickly and easily understand and communicate how successful your automation initiatives actually are.

This tool is designed to help you quickly identify high ROI versus low ROI tasks so your team can make educated decisions about which types of automation tasks to focus on both now and in the future. Of course, since all organizations are unique, these tools and calculations are flexible and can be customized as needed.

We are planning a number of enhancements to the Automation Calculator to be released by the end of the year. These include a new look and feel, persistence of your cost settings, and PDF export similar to our other reports. 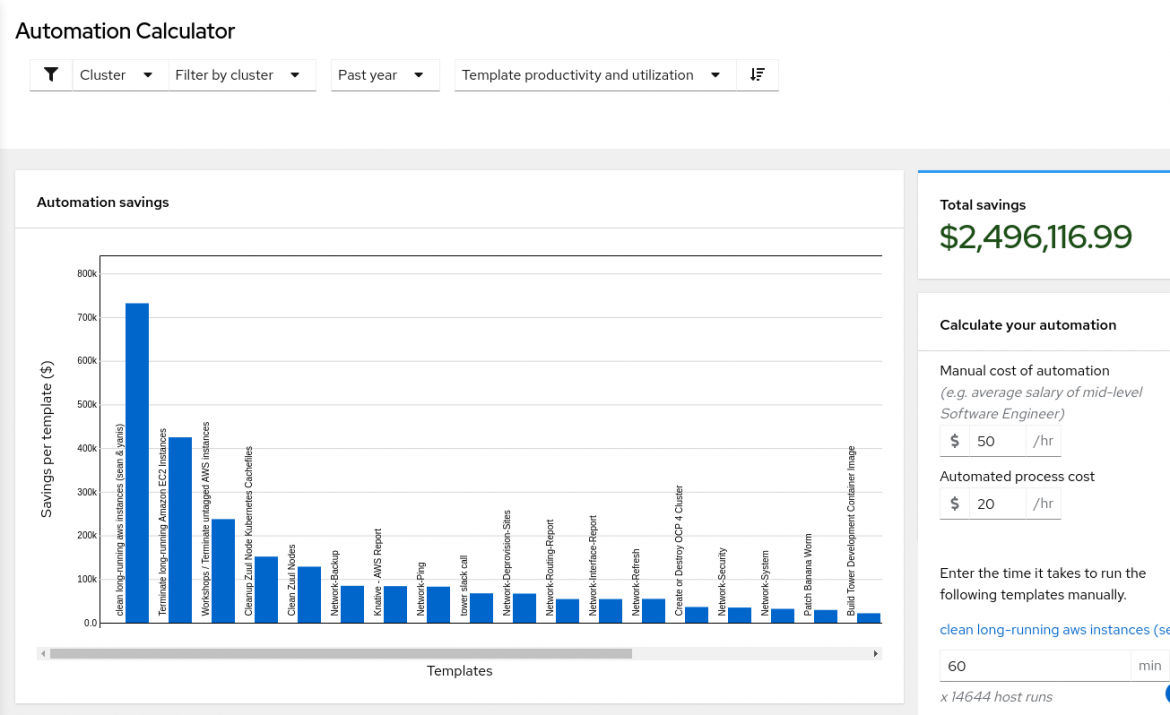 The Advisor service looks at your automation controller deployments and analyzes the collected metadata against a set of recommendations we’ve developed, based on our experience supporting Ansible and Red Hat Enterprise Linux (RHEL).

Advisor provides recommendations in four categories: availability, performance, stability and security. Each recommendation includes a description, a prioritized risk level, the number of systems impacted and whether the issue has an existing Ansible playbook.

When an Ansible playbook is available, the Remediation feature allows you to quickly generate and execute the playbook directly within the platform. Together, Advisor and Remediation help you cut down time wasted in identifying and troubleshooting issues across your systems. 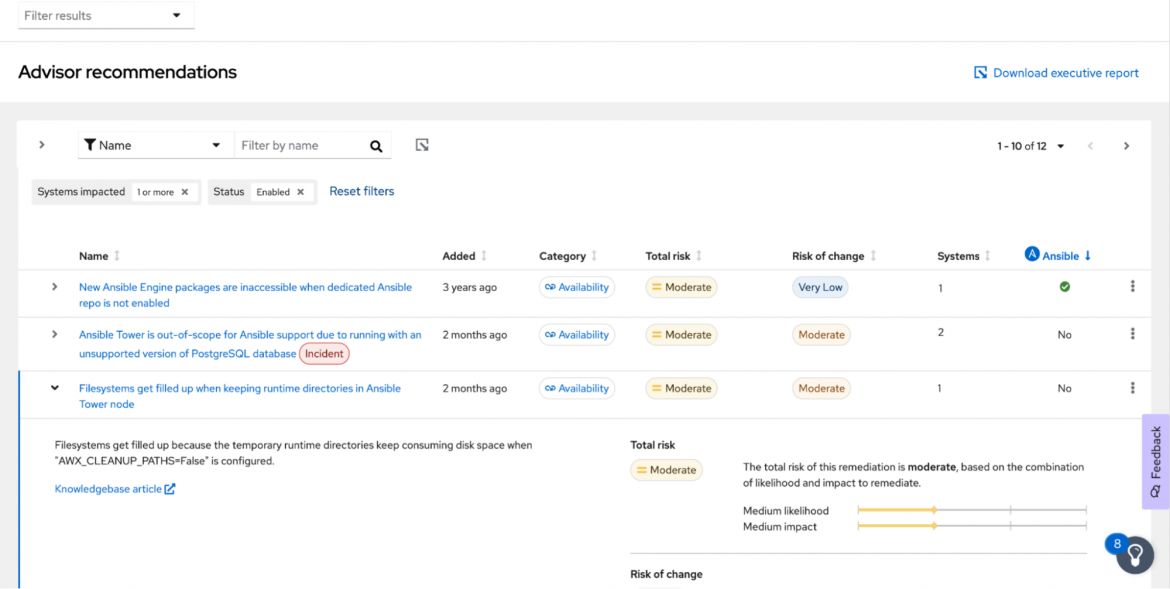 Drift lets you compare systems to identify differences either from a baseline you define, from other existing systems or from historical system profiles.

Creating and using a baseline for comparison gives you a quick and easy way to spot any deviations from a known-good state.

But you don’t have to use a baseline—you can simply compare one system to another and quickly spot any differences between them. This lets you make sure all members of a cluster are configured the same way, for example.

Finally, being able to compare current systems against historical profiles means it’s easy to identify differences from day to day. For example, if something was working on Friday but isn’t working on Monday, it’s easy to find and revert any changes. 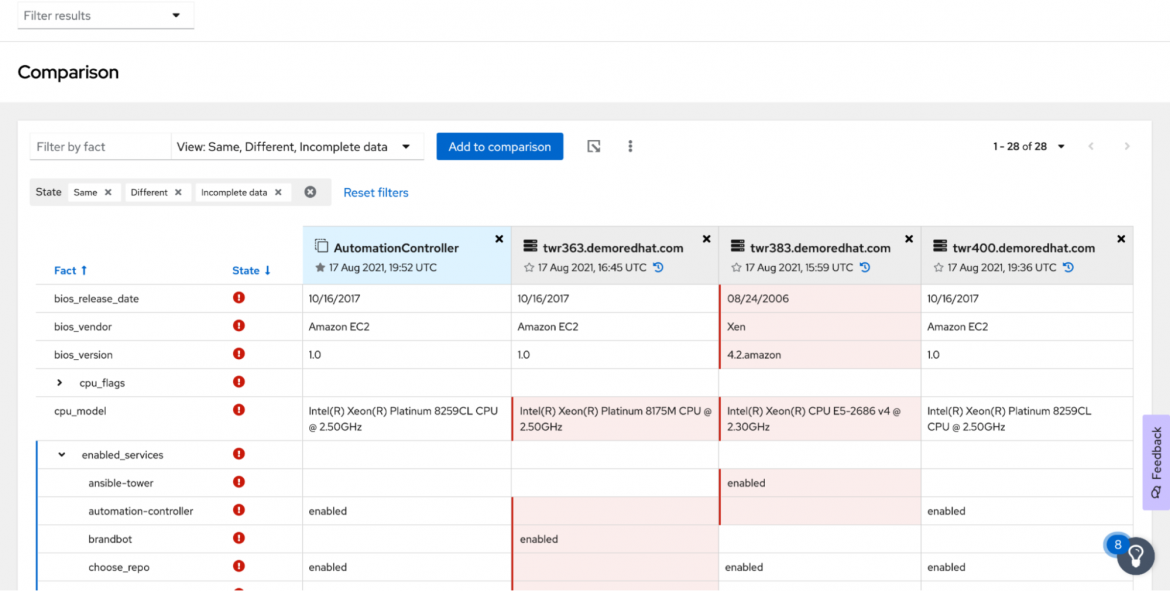 The Policies tool lets you create custom rules to identify various platform components and trigger notifications and alerts when those rules are broken. Currently, notifications include sending emails to all subscribed users and all admins of the account, as well as triggering an HTTP POST request to integration endpoints.

For example, in a RHEL environment, you could use Policies to notify you if the firewall is turned off, or when a particular service is enabled or disabled.

As an added bonus, we’ve put together a short video series that gives you a quick and humorous way to explain the basics of automation to people you might be trying to convince to give it a try.

You can find that video series here: Automated Live! A video collection hosted by Colin McNaughton.