RHEL 9 networking: Say goodbye to ifcfg-files, and hello to keyfiles

In my first Red Hat Certified Engineer (RHCE) fast-track training in 2002, we were using Red Hat Linux 7.2, and I learned to love the network configuration files in /etc/sysconfig/network-scripts. Later, Red Hat Enterprise Linux (RHEL) 6 introduced NetworkManager (also known as ‘NM’). When reading the RHEL 9 release notes, this change stood out for me:

In RHEL 9, /etc/sysconfig/network-scripts (also known as ifcfg files) will no longer be the primary storage for network configuration files. While the ifcfg style is still available, it is no longer the default location where NetworkManager stores new network profiles. Have a look:

This refers to the different storage locations like ‘keyfile’ and ‘ifcfg-rh’. It looks up key files first, and then the ifcfg-rh files. You can find details on key files in the NetworkManager docs and the RHEL 9 docs. NetworkManager looks for key files in various places, but this article focuses on the files in /etc/NetworkManager/system-connections.

With the default config, you can keep using ifcfg-rh files in /etc/sysconfig/network-scripts, but you need to be aware that:

While the ifcfg- and key file formats do not have the same syntax, they mostly represent similar data about the interface configuration. Here is a comparison of both formats: 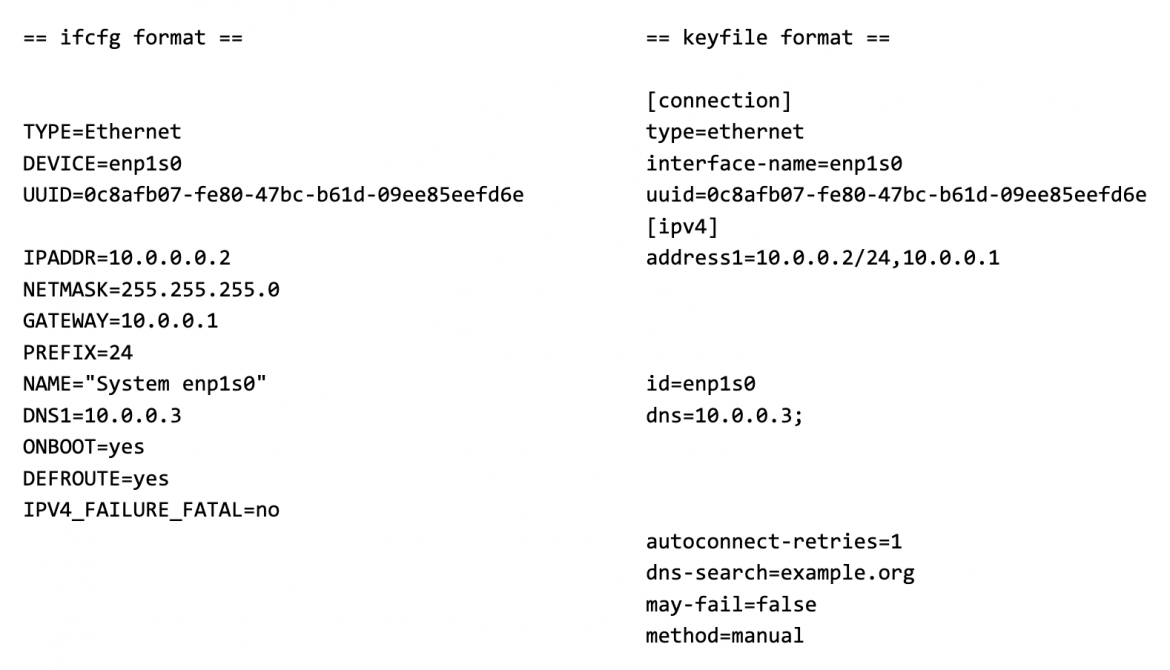 How to change interface settings

Whether you decide to keep using ifcfg-rh files (although not recommended) or to use key files, you can change interface settings (like IPs) in either of these ways:

Historically, various Linux distributions have spread interface configurations over many places: Debian and its derivatives traditionally use /etc/network/interfaces, CentOS and related distros use /etc/sysconfig/network-scripts, and so on. With more distros adopting NetworkManager, keyfiles in /etc/NetworkManager/system-connections have become the canonical place for network connections on Linux.

This change landed in Fedora 33, and now it's in RHEL 9. New major versions of RHEL (like RHEL 9) are where heavy changes like this, things that could break existing scripts and workflows, can be implemented. Since RHEL's current plan is to provide 10 years of minor releases, it's smart to familiarize yourself with this change and start incorporating it into your code.

If you have further questions, please check this knowledgebase article, which we will update as new questions arise.

In RHEL 9, `/etc/sysconfig/network-scripts` (also known as `ifcfg` files) will no longer be the primary storage for network configuration files.