Many organizations are apprehensive about the security of edge deployments. As data becomes more and more valuable, security threats create increasingly serious concerns. No organization wants to be in the news explaining why they were exposed to the latest security threat, nor do they want to account for sensitive information being stolen. These security threats can damage an organization's credibility and ultimately impact their bottom line.

This post will describe some of the security threats posed by edge deployments and discuss how Red Hat and our ecosystem of partners can help mitigate them. We’ll start by describing the additional threats created by deploying edge solutions.

Security considerations beyond the datacenter

For many security teams, securing the datacenter with firewalls, two-factor authentication, monitoring Common Vulnerabilities and Exposures (CVEs), and role-based access control (RBAC) methods has been their primary focus. Now that edge deployments are becoming more and more in demand, these security teams need to turn their attention to protecting these new deployments, which create extra concerns because the attack surface is now extended beyond the datacenter. 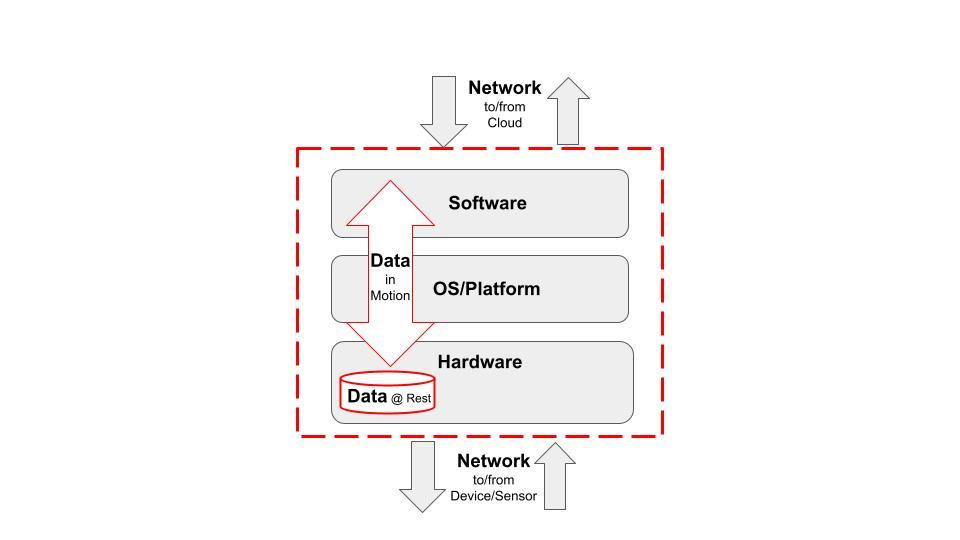 Now we’ll explain each edge technology component and some of the vulnerabilities it presents.

Securing data at the edge

The most critical component is data. This is what edge deployments are all about—capturing, collecting, and processing raw data at the point it is generated through some event. Once the data is processed, then some valuable information is created that could be used to make intelligent business decisions.

Data, when moving from source to destination, is data in motion. Data stored on a disk in a database is data at rest. For edge deployments, there is typically a constant flow of data from the end user device or sensor. That data captured or exposed to some iniquitous group could pose serious challenges to an organization, so it must be protected in motion and at rest.

An effective approach to protecting data in motion or at rest is using encryption techniques. Red Hat and its ecosystem of partners have technologies that can help organizations meet governmental standards for encrypting data in motion and at rest. For example, Red Hat OpenShift provides the following features for data protection:

Securing networks at the edge

In order to access the data, bad actors must first breach the next most critical technology component; the network. Although data is the most valuable asset in an edge deployment, data is not always the motivating factor for security threats. Bad actors could just seek to disrupt operations by gaining access to networks or systems.

Today's networks are more complex than ever, especially with edge deployments, and techniques like Software Define Wide Area Networks (SD-WAN) are now more common. We are all too familiar with disruption-style attacks like Denial of Service (DOS).These can be especially problematic for edge devices because they are typically resource-constrained and can easily be overwhelmed by such attacks. Network attacks at the edge are very similar to those against a datacenter.

The issue that edge deployments bring is the complexity and scale of the networks and the devices that connect into them. There could be millions of sensors or devices and gateways on the network, and a single misconfigured device could open the door to hackers looking for access. Automated, consistent, scalable, policy-driven network configuration is paramount to protecting against network attacks. Technologies such as Zero Trust Network Access (ZTNA) can also be used to protect edge access to enterprise data or cloud services.

Red Hat and its ecosystem of partners have technologies that provide several capabilities that mitigate network vulnerabilities including Red Hat OpenShift Container Platform, which provides network isolation at the platform level with:

Securing OS platforms at the edge

Encryption technologies and network technologies are relatively established and have advanced a lot to help address security concerns for edge deployments, but hackers continue to find security vulnerabilities in OS platforms.OS platforms are readily available, so bad actors can pound away at these platforms, constantly finding ways to exploit any and every vulnerability. CVEs have become a common concern and is an industry-wide method for dealing with security threats.

Red Hat Enterprise Linux (RHEL) and OpenShift Container Platform have security features that help organizations deal with CVEs in an efficient way. Red Hat CoreOS, the hybrid cloud Operating System, is built with security in mind and includes these features:

Securing software at the edge

Not all security threats are external to the organization. Organizations deal with individuals who either intentionally or accidentally introduce software that could cause security issues. Here is a list of the concerns that can be introduced by bad actors or careless employees:

Red Hat has an ecosystem of partners that enhance and bolster OpenShift’s container security features throughout the entire CI/CD pipeline, including:

With these capabilities and features provided by Red Hat partners, organizations can reduce the risks of their environments exposing them to unnecessary security threats.

Securing hardware at the edge

A major security threat for edge hardware is imposter devices. Because hardware is no longer confined to the datacenter, it is now accessible to bad actors who could potentially replace a piece of legitimate hardware with an illicit copycat. This imposter, if configured properly, could pretend to be something that it’s not. Organizations need to have confidence that any device that connects to their network is what it says it is and will perform as expected, including accessing expected data and networks.

One method to deal with this concern is device attestation. Attestation helps organizations identify devices that have been tampered with or have outdated insecure software running on them. Red Hat CoreOS, part of a Red Hat OpenShift deployment, is designed for secure boot capabilities that allow administrators to ensure that boot loaders, system files and other packages are as they should be by validating the digital signature of all these system resources.

No organization wants to be in the news explaining why they were exposed to the latest security threat, nor do they want to account for sensitive information being stolen. These security threats can damage an organization's credibility and ultimately impact their bottom line.