Automation can help increase efficiency, save time, and improve consistency, which is why Red Hat Enterprise Linux (RHEL) includes features that help automate many tasks. RHEL System Roles is a collection of Ansible content included in RHEL to help provide consistent workflows and streamline the execution of many manual tasks.

RHEL contains a storage system role that can automate the configuration of logical volume manager (LVM) volume groups, logical volumes, and filesystems. The storage role supports creating filesystems on unpartitioned disks without the use of LVM as well. In addition, the storage role can automate advanced storage functionality such as encryption, deduplication, compression, and RAID.

The “Managing local storage using RHEL System Roles” documentation includes information and example playbooks covering how to use the storage system role in many different scenarios. 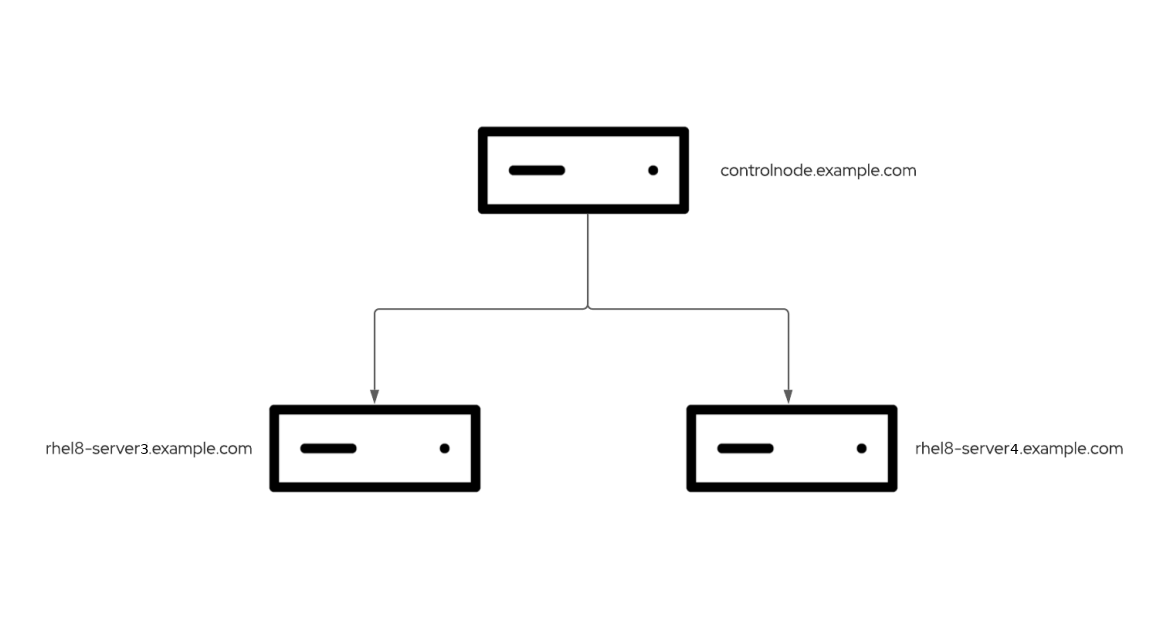 These servers have the following storage devices:

In this example, I would like to setup the following new volume groups, logical volumes, and filesystems:

Normally when using the storage system role, a list of disk devices is supplied to the role. For example, a basic playbook to create the database_vg volume group, logical volumes, and filesystems on rhel8-server3 using the two 15GB disks would contain:

It would be possible to create a host_vars directory, and define variables that are specific to each host. This would allow me to specify which disks should be used on each host. However if you have more than a few hosts, manually gathering the disk information from each host and specifying it in a host_vars file for each host quickly becomes impractical.

In this scenario, what I would really like is to have Ansible dynamically find the disks using Ansible facts.

By default, when Ansible runs a playbook on hosts, the first task will be to gather facts from each host. These facts include a significant amount of information about each host, including information on storage devices.

On my control node, I have an inventory file named inventory.yml with the following entries:

I can quickly take a look at what facts Ansible gathers from the rhel8-server3 host by running:

The gathered facts are displayed, including a list of ansible_devices. In this list, each disk device has an entry, such as:

The holders, links, and partitions fields can be used as an indication to help determine if the disk possibly contains data. As you build a playbook to select the disks that should be used by the storage role, you might want to use these fields to help exclude existing disks that might already contain data. However, this type of logic would not be idempotent, as on the first run the storage role would configure storage on these unused devices. On subsequent runs, the playbook would no longer be able to find unused disks and would fail.

In the example presented in this blog post, the storage role will control all storage on the systems, except for the disk that the operating systems (OSs) boot from (the vda device on all managed nodes), so I am not concerned about selecting disks that might already contain data.

Note that extreme care must be taken to ensure that you don’t inadvertently identify disks for the storage role to use that contain data, which might result in data loss.

Using Ansible facts to select disks for storage role use

Again, in this environment the storage role is managing all storage on the system other than the vda device, so I am not concerned with the playbook finding and using disks that already contain data. If your environment is not fully managed by the storage role, additional precautions should be taken to ensure the playbook doesn’t use disks that might already contain data, which could result in data loss.

Based on my environment, I can create a playbook to locate the disks with my criteria:

The first task identifies ansible_devices that start with the device name vd (excluding vda), and identifies the disks that are 10GB in size. These identified disks are assigned to the web_vg_disks list variable.

The second task works in the same way, identifying 15GB disks for the database_vg volume group and stores the list of identified disks in the database_vg_disks variable.

The third and forth tasks display the contents of the web_vg_disks and database_vg_disks variables.

When run, the playbook shows:

The playbook correctly identified the disks I would like to use on each server.

Adding storage configuration to the playbook

Now that I have logic to identify the disks I would like to use, the next step is to utilize the storage role to implement my desired volume group, logical volume, and filesystem configuration.

I’ll add another task to the playbook to call the storage role. The complete playbook, named storage.yml is:

The Run storage role task defines the storage_pool variable to specify my desired storage configuration. It specifies that a web_vg volume group should be created, with a web_lv logical volume utilizing 100% of the space, and with a filesystem mounted at /web. The volume group should use the disks listed in the web_vg_disks variable which the previous task defined based on the discovered disks that met the specified criteria.

It similarly specifies that the database_vg volume group should be created, with a database_lv logical volume using 50% of the space, and with a filesystem mounted at /database. There should also be a backup_lv logical volume, using 20% of the space, with a filesystem mounted at /backup. The volume group should use the disks listed in the database_vg_disks variable which the previous task defined based on the discovered disks that met the criteria.

I specify that the storage.yml playbook should be run, that it should escalate to root (the -b flag), and that the inventory.yml file should be used as my Ansible inventory (the -i flag).

To validate the configuration I’ll run the lsblk command on each of the managed nodes:

This playbook is idempotent, meaning I can re-run it, and the tasks will not change anything again unless needed to bring the system to the desired state.

On the database_vg, my logical volumes only added up to use 70% of the available space in the volume group (50% went to databale_lv, and 20% went to backup_lv). This means that there is 9GB free in this volume group on each host. If I would like to increase one of these logical volumes and the corresponding filesystem, I can simply go into the playbook and update the percentage of space that should be allocated.

The storage RHEL System Role can help you quickly and consistently configure storage in your RHEL environment.

The storage RHEL System Role can help you quickly and consistently configure storage in your RHEL environment.