This blog post showcases the performance improvements achieved in the process of booting unlock for Clevis LUKS-bound devices. By removing a single function from the boot process, boot time was shortened by 20% to 47%, depending on the scenario.

Clevis is a software framework that allows booting encrypted LUKS devices without manual intervention. This tool is part of Network-Bound Disk Encryption (NBDE). Clevis is the “client” side, although it is not strictly necessary to work against a server, and can be configured to read keys in different ways. Clevis has a set of “pins” that allow different mechanisms for automatic unlocking:

My initial idea was to identify any possible bottlenecks that could be making the boot process last longer than it needs to be. After all, Clevis is a set of commands that allow storing LUKS metadata and recover it in the boot process. Inspection of the different commands executed by Clevis, together with the time spent by each of them, would allow discovering if any function spends most of the execution time. Then I could study if it can be improved or removed.

For this task, I defined different scenarios:

Clevis can work with different configurations, which represent the different mechanisms to allow automatic encrypted disk unlocking. I identified the following configurations as the most representative:

I did not include the sss configuration because it is composed of the basic ones, tpm2 and tang, which are already included.

I considered several mechanisms for dumping timestamps of each of the lines executing in Clevis boot:

After logging with the respective timestamps was complete, I could observe that the following functions/lines could be possible bottlenecks:

I identified the possible bottlenecks by analyzing the different times spent on the execution of each of the most representative functions that intervene in the boot process via Clevis. Further information on the logs dumped are available in this .xlsx file.

In particular, the tabs TPM2-pcr_id: TPM2-pcr_id:7 and tang contain timestamps of the dumped logs according to the change introduced to obtain such information. In any of these cases, it can be clearly observed that the possible bottlenecks are the places where the most of the execution time is spent.

Considering the proposed scenarios, together with the different configurations that apply for each of them, I measured the time used by the system to boot and then analyzed the time saved when avoiding the function clevis_luks_check_valid_key_or_keyfile. To obtain these values, I used the systemd-analyze blame command and calculated the following time measures:.

Scenario 1: VM with one LUKS device after clevis_luks_check_valid_key_or_keyfile bottleneck removal

It is apparent how the time spent in boot decreases proportionally to the number of devices unlocked in boot time.

This table represents the time measures of the boot times used to unlock one LUKS2 device in a real machine, in particular, a Lenovo ThinkPad T14s Gen 1, model 20T1S39D5Q, with original code.

As demonstrated in the Bottleneck identification section above, another possible area of code that consumes much of the time in the boot process is sleep in clevis-luks-askpass. The sleep initial value is 0.5 seconds and is placed in the clevis-luks-askpass file, which is the file executed by systemd. It is introduced to wait for the unlocking process of the devices to unlock to be successful. So, the question here is: Is it really necessary? Can it be changed so that boot process is accelerated?

The short answer is that this sleep is already customized at an optimal value. Changes of its value did not cause improvements on the boot time, so the values will not be covered here. If you are interested, they are included in this .xlsx file.

Here, we’ll show the time improvements obtained in each of the scenarios in bar graphs:

Scenario 1: VM with one LUKS device

The bar graph below represents boot time improvements in seconds for the individual keys due to the validation removal: 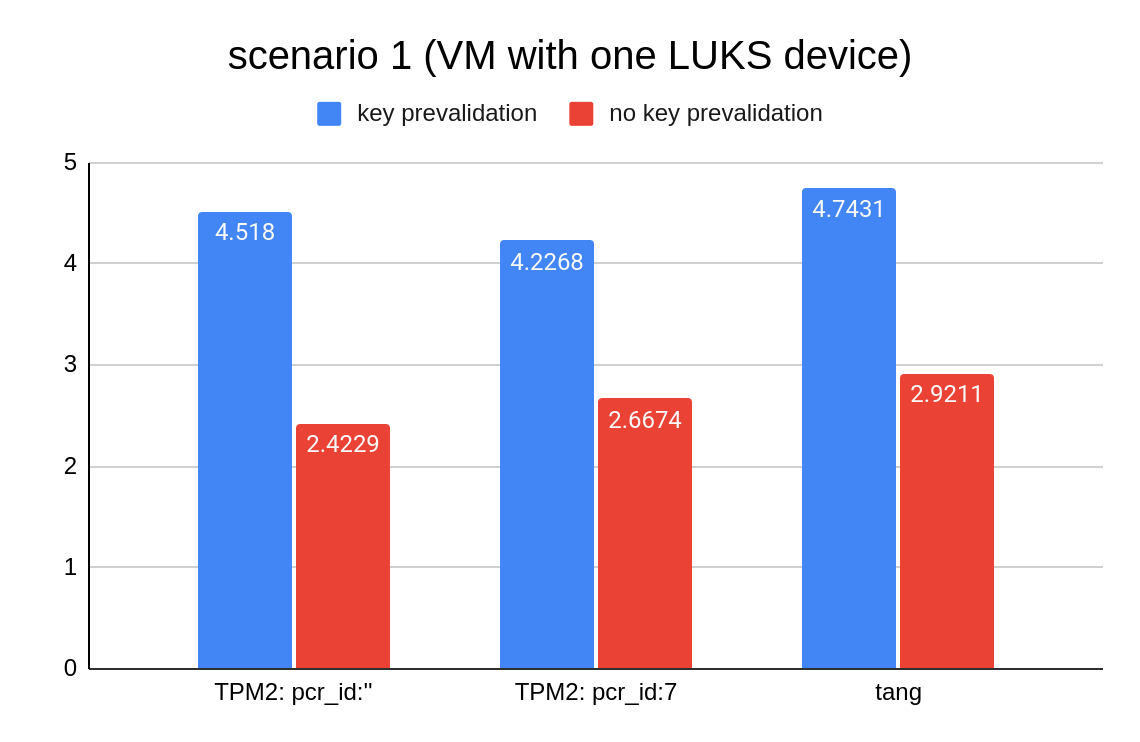 This bar graph represents boot time improvements in seconds on keys due to the validation removal: 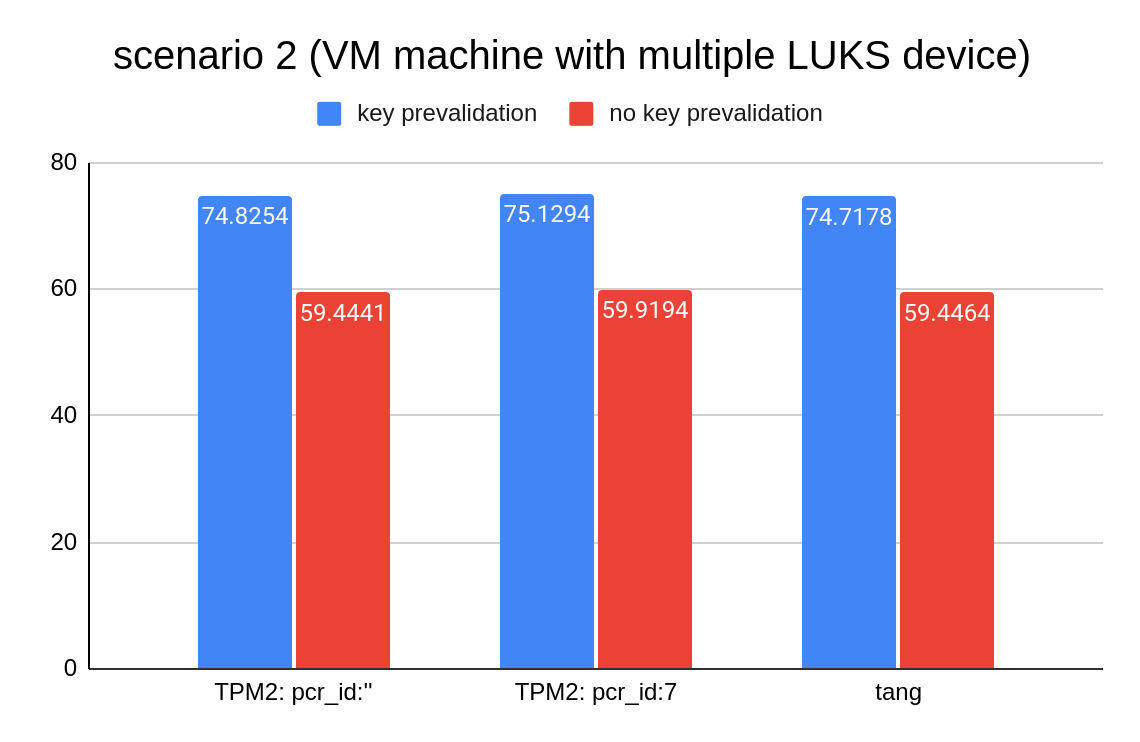 This bar graph represents improvements on keys due to the validation removal: 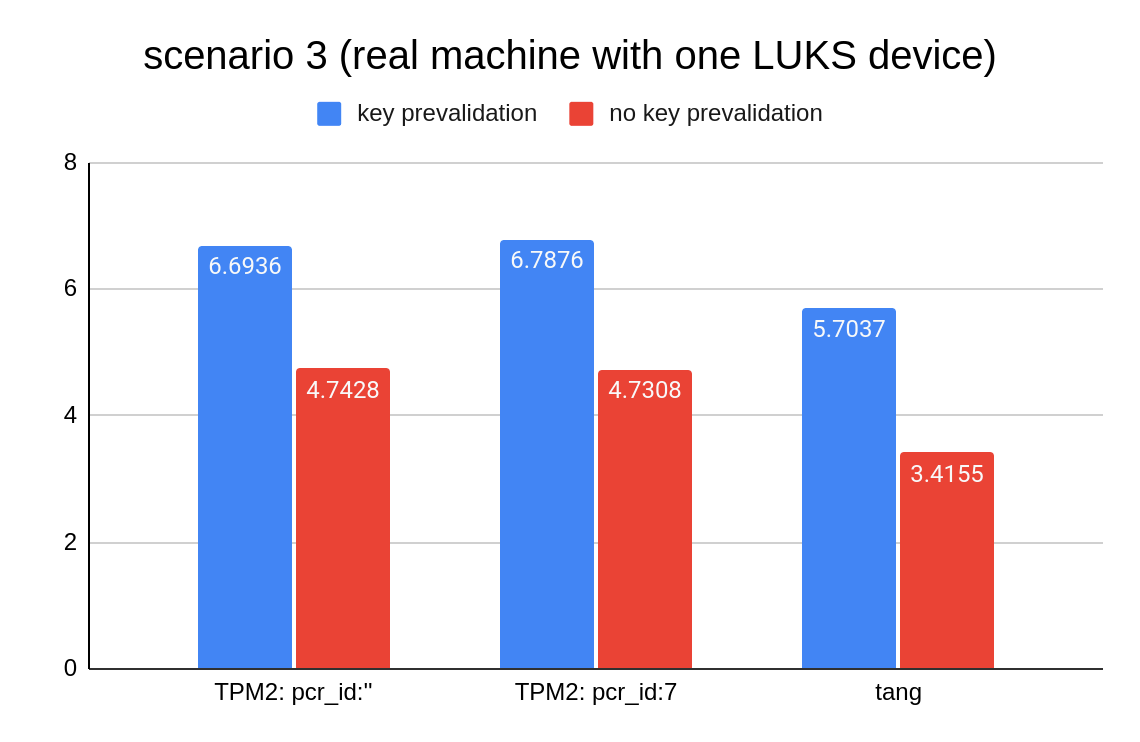 After analyzing  time measures (See section: Time measures (“clevis_luks_check_valid_key_or_keyfile”) above), it is apparent that the real bottleneck is clevis_luks_check_valid_key_or_keyfile. So, the action that has been taken is simple, and the call to this function has been removed, but only for the execution path in the boot process. The function will be called in other Clevis-related commands, so its execution has been parameterized so that it is avoided only in the boot process.