In this article, I discuss how pipelines can be used for lifecycle management (LCM) of software components of an infrastructure or platform. The key objective is to achieve more frequent and reliable deployments and upgrades of the associated infrastructure or platform. This helps to accelerate the adoption of new software that matches a service provider’s requirements. The lack of service provider adoption of this type of pipeline is one reason why day 2 operations of cloud-native deployments are often challenging.

Design begins with the definition of stages to obtain new versions of software components. The level of design complexity depends on the particular requirements of the software vendor, ranging from a simple script to an advanced automation workflow. The automated workflow would interact with APIs provided by the vendor to obtain the software and mirror it locally within the service provider’s environment.

As an example, I will describe the concept of a pipeline for identifying available Red Hat OpenShift releases. The pipeline has to validate whether a specific release is valid for deployment on the current service provider’s configuration. The pipeline’s goal is to achieve reliable upgrades of air-gapped OpenShift clusters (e.g. clusters with no connection to the internet or that have restrictions for accessing online vendor registries).

As depicted below—using OpenShift 4.7 as a baseline —an OpenShift release is supported for up to 18 months. During that time, micro versions or "z-releases" are provided with security patches and bug fixes.

Pipeline design has to consider as many combinations as the service provider may choose to have. For this example, and as depicted below, I am only considering a simple pipeline to be used for micro updates, or for upgrades from one OpenShift release to the next. 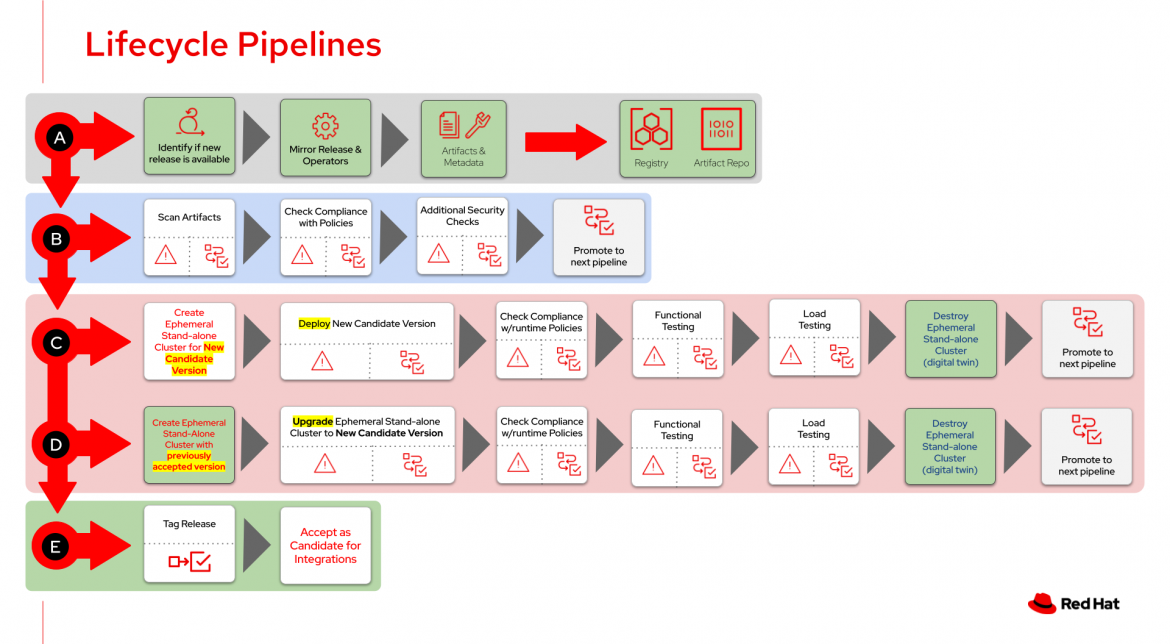 There is considerable overlap between these pipelines and the pipelines for onboarding CNFs that were identified in part 1. The initial pipeline (A) is responsible for mirroring a new OpenShift version to the service provider’s registry. Once mirrored, this pipeline creates a new candidate version to be used over subsequent pipelines.

Best practice dictates that software artifacts provided by any vendor, or those generated outside of the service provider, should be scanned and security checked. The next pipeline (B) is used to provide a baseline for comparison, or can be used for audit purposes. The service provider’s vetting process is where the actual validation and verification work happens (C and D). To understand these steps a different representation for these pipelines is depicted below:

When all the tests and validations are successful, the ephemeral cluster is removed and resources are made available for future use.

The next pipeline (E) tags and labels the software components as a baseline for new clusters defined in the environment. In many service provider environments, this final stage mirrors the software artifact into internal repositories where it can be consumed by other specialized pipelines.

How Red Hat can help

Lifecycle management enables more frequent and reliable deployment and upgrades of the associated infrastructure or platforms. The use of pipelines to deploy and validate software releases and any incremental versions—also used to check if the software adheres to a service provider’s policies—are important for consistency, reliability and faster time-to-market.

Service providers that use the Red Hat OpenShift will benefit from simplified workflows that can be used to optimize their operational model and reduce their total cost of ownership (TCO).

In my next post I will cover pipelines for multitenant end-to-end integrations and how they are used in conjunction with the pipelines described here to capture incompatibility and other issues before they are adopted into a service provider’s production environment.