The “Supermind” of Open Source 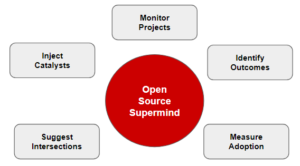 I am reading Superminds - the The Surprising Power of People and Computers Thinking Together by Thomas W Malone--a book which calls out various facets of injecting Artificial Intelligence into thriving ecosystems of humans working together to augment the collective intelligence of these groups as a whole. Malone takes us through a journey into a world that brings to bear collaborative technologies and machine learning to aim for the perfect enterprise -- An enterprise that can be ideally positioned to formulate and execute the most effective strategy to be successful. Respecting one of the “super brains” in the recent past, Malone calls this enterprise “Alberts”. I continue to read this page-turner and within a few pages, Malone references Wikipedia and Open Source software as highly de-centralized online groups that are much more prominent -- just as he had predicted in his Future of Work book published in 2004. This got me thinking. Can this concept of the “Supermind” be applied to Open Source? Taking a cue from Malone’s idealistic enterprise--“Alberts”, join me as I inject a new member into the Open Source community--O2S2.

O2S2 is an artificially intelligent entrant into the Open Source community. Per Malone’s assertion, robots no longer have a human shape but are just lines of software code that execute built into everyday devices and gadgets working their magic behind the scenes. Even so, I like the connection to another robot some of us could relate to a few decades back--call it childhood fascination! Thus, O2S2!

Innovation happens at intersections. At an individual level, this happens through intersections of our own thoughts from varied perspectives when it is applied to a real-life problem scenario. Interactions with another individual takes innovation to a whole new level – it is a potential multiplier because the types of thoughts and ideas that someone else brings can be radically different from the ones we originate. Add more people and you have the innovation potential taken to the next level with groups of potential innovators – where the innovation happens not because of one individual but because of the group dynamics. Have multiple groups interact with each other and the result is an exponential rather than being just a multiplier. This is how the Open Source community has emerged over the last few decades as a live, passionate, thriving ecosystem that continues to churn out next-generation paradigms and technologies.

Artificial Intelligence has emerged as a technique where computers can process and churn incredibly large volumes of data and come out with insight that could be applied in real life–whether it be to empower the connected automobile or to perform cardiac surgery etc. These devices are being programmed through iterative modeling techniques and fed large amounts of data using which they determine steps they need to execute with timely, corrective actions.

What can O2S2 do if it is fed all the data about what goes on in the Open Source community?

Monitor Projects. The fail fast approach results in several projects that are taken through the life cycle with varied degrees of progress. Some don’t see the light of day whereas others flourish in full glory with global adoption. It is a self-monitoring scheme where the community collaborates to adopt whatever works best for the ecosystem as a whole.

Identify Outcomes. Like any other project, outcomes matter–or, at the least the potential for tangible outcomes. Projects with high potential are the ones that could be repurposed, integrated and packaged into meaningful products for applications in real life.

Measure Adoption. Innovation can become shelfware if it is not adopted. Humans have an innate way to gyrate and converge upon concepts, paradigms, technologies in the IT world just like they do when it comes to the arts–be it movies, music, paintings, sculptures etc. The popularity of any such concept is a direct function of the number of humans who have taken a liking to it. If they like it, they will come.

Suggest Intersections. One simple but powerful way to steer projects towards innovative outcomes is to proactively connect them with other projects that are very different but have a similar goal. Some examples:

Going back to my original assertion in the beginning, innovations happen at intersections. But, intersections must happen by design – not just by accident. This is where O2S2 can be a terrific catalyst.

Inject catalysts. There are many projects that are being worked on in a private setting external to the Open Source community. These projects embrace the fundamental concepts of collaboration within a limited domain. Incubators for start-up companies are a good example. There have been cases where corporate leadership has engaged such communities of innovators with their own internal initiatives to serve as catalysts. With controlled access, these communities can serve as powerful injections to fuel the Open Source community.

Innovation at scale is about ensuring the continuous availability of an ecosystem where it can be nurtured both by the “Superminds” of humans and computers.

What say you? Interested in making up the Supermind of Open Source?

How about getting Malone's insights for starters--after all, he wrote the book on it!