In this post:  Red Hat Enterprise Linux (RHEL) 8.5 is a major update since RHEL 8.4 (What’s new in RHEL Container Tools?) and covers all of the features which have been released since then. In this article, we’ll cover the following main items:

In RHEL 8, we provide two main types of application streams for the container tools: one fast, one stable for 24 months. You can see the versions of Podman, Buildah, and Skopeo with a single command:

In the output, you can see the versions of Podman, Buildah, and Skopeo in the stable streams, but if you install the fast stream, you’ll notice that it has been updated to Podman 3.3, Buildah 1.22, and Skopeo 1.4.

There’s a lot of upstream work going on to improve “podman machine” but this is experimental upstream work as of today, and is not supported in RHEL.

Also, there’s a lot of improvement and investment in podman play kube and podman generate kube commands which continues to improve the user experience going back and forth between OpenShift/Kubernetes and RHEL/Container Tools.

Stay tuned for more good stuff as we move toward Podman 4.0!

Continued Support for 2.0 and 3.0 Stable Streams

For the up to date information, please see the Application Streams Release Life Cycle page.

This change should improve supply chain security while being completely transparent to most users (and especially production servers). In RHEL 8.5, we’ve deployed a default security policy (`/etc/containers/policy.json`) which will verify the GPG signatures of any images pulled from registry.access.redhat.com or registry.redhat.io. Red Hat has produced these GPG signatures and published them for many years, but historically users had to configure Podman to verify them. Now, with the latest version of Podman on RHEL 8.5+ these signatures will be verified by default.

You might have difficulty pulling container images for RHEL 9.0 Beta after upgrading your host to RHEL 8.5. This is likely because signature validation of images is enabled by default in RHEL 8.5 and the RHEL Beta key has not been installed on the system. This is easy to enable.

Next, configure Podman to use this new Beta GPG key:

Next, verify the new changes:

Notice that the Beta key is used only for the beta images, and the main Red Hat GPG key is used for the standard images. Finally, note that GPG signatures are not checked for from any other registry:

Next, pull a RHEL 9 Beta container image on a RHEL 8.5 container host, and you will notice that it pulls without a warning, and also verifies the signature against the beta GPG key:

UBI is now published on DockerHub

Red Hat’s goal is to offer choice in sourcing containers from popular registries. In support of this goal, all four UBI base images (micro, minimal, standard, and init) are available on DockerHub today (Red Hat Brings Red Hat Universal Base Image to Docker Hub). 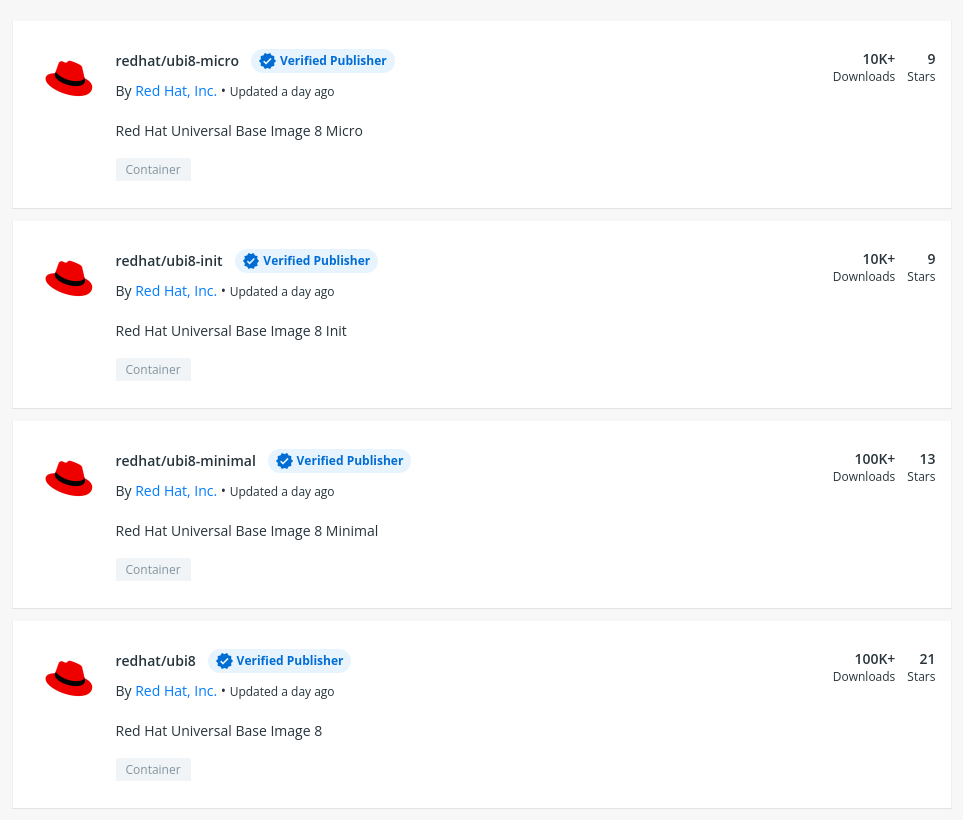 These images are updated once every six weeks, or asynchronously (within days or hours) if there is a Critical or Important security CVE. Signature verification of  images is limited to Red Hat sponsored registries.  We intend to expand this and similar supply chain security mechanism to our partners (e.g., Docker) in the future.

There are some exciting announcements with the Podman Container Image. We kept this container image as Tech Preview in RHEL 8.4 to improve the UX based on some work by Urvashi Mohnani and Dan Walsh. Now, we’re making it generally available with RHEL 8.5 because we think the UX is more refined. We’re also adding this container image to UBI 8 which means you can distribute and use this Podman image anywhere you want.

It can be found in the Red Hat Ecosystem Catalog on the UBI 8 product page.

This image is extremely easy to try out. Here’s an example of running Podman in Podman. First, run the outer container. Notice, we’re running this outer container as a regular user:

Now, we are running the cat command as root in a container, which is running as our user account in the first container. 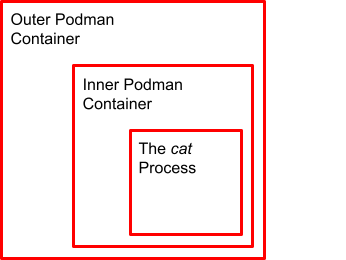 With cgroup2 and Podman, you get the ability to manage rootless cgroups (for regular user accounts). The newer cgroup2 also supports hierarchical controls, which means a user can be put into a specific cgroup and then can further divide their cgroup into individual containers.

Rootless containers is a place where Podman and the RHEL Container Tools are constantly improving. Because of some kernel backports in RHEL 8.5, as well as some wonderful work that the Podman team did, we can now offer native OverlayFS support and performance, even when running rootless containers.

Historically, we’ve run rootless containers using an implementation of OverlayFS which runs in the userspace. With this new feature, you can take advantage of the performance improvements of OverlayFS running in the kernel.

Note, you will need to clear your local container storage to take advantage of this feature. WARNING: this will delete all of your existing containers and container images. First, perform a system reset:

The above command will give you a helpful warning and make sure your storage is indeed reset so that you can take advantage of native OverlayFS. Next, run a container:

Now, verify that there is no /usr/bin/fuse-overlayfs program running:

For more information on the upstream work that drove this feature, there’s a great blog by Giuseppe Scrivano and Dan Walsh:  Podman is gaining rootless overlay support

First, if you’ve been testing RHEL 9.0 Beta, you’ll notice that the versions of Podman, Buildah, and Skopeo are identical. This is because the AppStream channel in RHEL 8 and RHEL 9 are meant to be quite similar. The idea is that you’ll be able to upgrade much easier.

You’ll notice this synchronization as RHEL 9 GA releases, and it is planned to continue until RHEL 8.10 when the versions of Podman, Buildah, and Skopeo will freeze. At this point, the RHEL 9 Container Tools Application Stream will be the source for the latest Container Tools.

As you can see, we continue to innovate and add new features to the Container Tools application stream in RHEL 8, as well as supporting stable releases for users who can’t absorb the change. This offers users the best of both worlds.

We’ve improved security by enforcing image verification and look to continue improvements in this area over time. We’re continuing to invest in performance improvements like kernel native OverlayFS and continue to invest upstream in creative solutions to improve Rootless containers.

We have also expanded the ecosystem to DockerHub to meet developers where they are, and ease the life of operations teams by giving them trusted base images which are ready for production.

Come check out the latest versions of our container tools, and feel free to give us feedback!

We continue to innovate and add new features to the Container Tools application stream in RHEL 8, as well as supporting stable releases for users who can’t absorb the change. This offers users the best of both worlds.