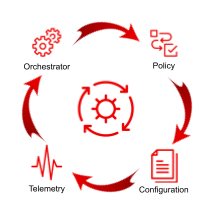 These concepts are similar to capabilities native to Kubernetes because it implements the closed-loop orchestration for containers. Kubernetes controllers (replication, endpoint, etc.), which possess the knowledge to remediate deviations, are control loops with awareness of the “desired state” and the “current state.”

When examining the closed-loop “incompatibilities” between a traditional orchestrator and Kubernetes, the principal differentiators are the source of truth for configurations and policies, and who acts over the managed artifacts.

The GitOps Model uses a Git repository as the single source of truth representing the desired state of the infrastructure, platform, and applications. This definitive repository is used by continuous delivery pipelines on closed-loop orchestration and automation flows to automatically synchronize the “current state” with the “desired state.” 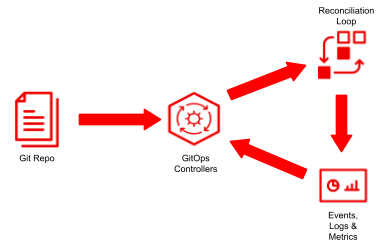 GitOps controllers are tools that receive or detect updates notifications from changes in Git, interpreting them as the policies for the “desired state” and controlling the managed artifacts. The GitOps Model contains a high level of flexibility, applicable in many instances and configurations. For example:

In real-world practice, the actualization of an ideal state will require integrating the traditional database into GitOps-driven operations. From here, the external orchestrator is required to write the artifact definition and configuration into the Git repository, which enables the corresponding GitOps controller to consume it and execute the needed reconciliation cycles. For the Orchestrator to track “desired state” progress or status, it must (when the app-of-apps pattern or ApplicationSets are in use) consult the API exposed by the GitOps controller or the parent GitOps controllers. 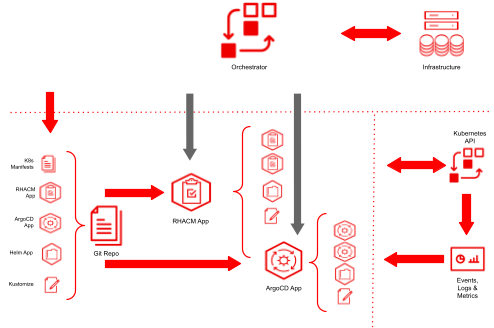 In the event of catastrophic failure, a new cluster can be created and the GitOps controllers will manage to bring it to a desired good state of the previous cluster. Because artifacts definitions and configurations are contained with version control, there is an exact record of the previously used (and working) configurations. Restoration or “rollback” requires only the importation of the correct version of the configuration or artifact definition from Git.