As modern digital infrastructure evolves towards cloud-native deployments and the hybrid multi-cloud, there is a growing need to simplify the operational complexity that results from the various layers of technology used in the process.

Modernizing the digital infrastructure presents significant challenges to operations (Ops) teams. In the old days, an Ops team used to be able to identify problems occurring in a given datacenter—and easily narrow it down to one box running mainly one application—with the whole infrastructure/application stack typically sourced through one vendor (sometimes two if the hardware is purchased separately).

Before we explain the notion of service assurance and closed-loop automation, let’s briefly describe orchestration and automation in the telco world.

Whether it is software-based infrastructure, applications, or hardware equipment, there are typically a lot of steps involved in deploying and managing their lifecycle, hence the need for automation and orchestration.

Automation is the act of taking a manual, domain-specific step and making it repeatable in order to achieve predictability and abstract the underlying components. The goal of automation is to expose consumable interfaces for a given domain by providing higher-level capabilities. 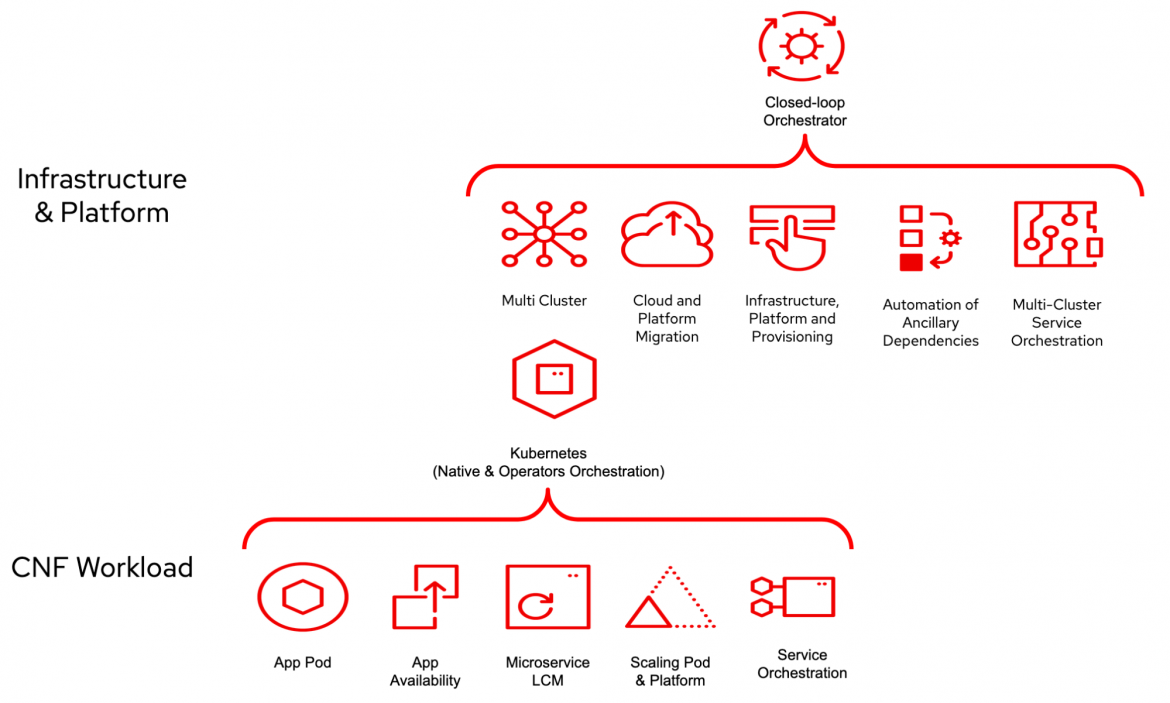 For example the deployment of a 5G core service is usually called orchestration. There are a lot of orchestration tools available, and some of these are provided by the software vendors themselves.

Overall, automation and orchestration can make deployments faster and reduce the chance of human error. There are various ways to do so. At Red Hat, our favorite approach is using the Red Hat Ansible Automation Platform.

Also, there is a growing trend to adopt GitOps methodology to manage and deploy content, whether it is hardware configuration, software deployment manifests or infrastructure descriptors (for infrastructure as code). It utilizes the concept of automation and orchestration, and leverages some built-in capabilities of Kubernetes.

Learn more about how GitOps can help achieve automation and orchestration of operations by reading The role of the Orchestrator in GitOps-driven operations. 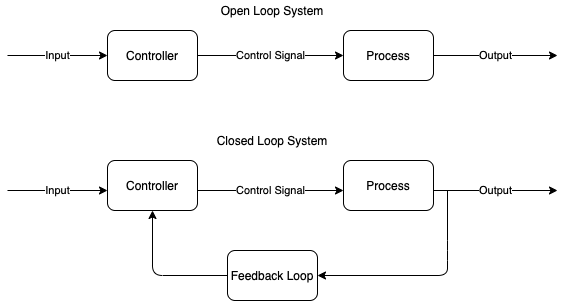 This duality is from control systems theory.

Open-loop automation is when deploying an application in a cloud environment without necessarily receiving feedback after the deployment is complete; and if a feedback is received, an Open-loop will not take action on it, rather, it will require a human to look into it and take action; i.e. the loop is open for human intervention.

Closed-loop automation is when feedback is received and is taken into account for further action to be taken “automatically” by the controller; that automatic action is often referred to as “remediation” and “reconciliation." The system will close the feedback loop.

There is a growing demand for open/closed-loop automation, which combined with AIOps can provide an intelligent and efficient way of auto-remediating a detected problem. One of the main advantages of a close loop is its “self-healing” capability leading to an important reduction in the operations.

But, it is not always possible to find a proper remediation solution. Sometimes, the number of factors to account for are too broad, or the environment in which the problem occurs is too dynamic; this is very true in the telecommunication domain.

Given CSPs investment in systems to operate their network and their business, trying to displace them through something like ONAP is challenging for the following reasons:

Standing up a completely new way of operating means replacing entire organizations, therefore it is critical to be able to integrate with existing systems, leverage as much as possible from the current solutions, and transition/evolve operations in a less intrusive manner.

In this post, we propose a model that leverages familiar technologies to implement service assurance in a hybrid cloud environment, with the ability to integrate into existing CSP business systems and solutions.

We present below an architectural blueprint for closed-loop automation. Consider an application (example: 5G core network function, RAN vCU, etc.) running on a Kubernetes-based platform like Red Hat OpenShift, in a hybrid cloud environment. Assume the application deployment has been orchestrated by Ansible or any other orchestration/automation platform. The application consists of multiple microservices that need to be monitored.

Dynatrace is an AI-powered observability platform that does exactly that. It integrates with the major cloud platforms and technologies so we decided to leverage it in this scenario.

Now let’s go over the event-based architecture implemented by the Red Hat Application Services portfolio using a simple use case.

Assume we have the application “app” running on OpenShift (OCP) and exposed by an OCP route. When a problem occurs (in this case, someone from an Operations team deletes the route for example), Dynatrace identifies the issue, and is integrated with Red Hat AMQ (a Kafka-based messaging platform) through a webhook. Dynatrace sends a notification on a given message queue. Red Hat Fuse is listening on the queue, it picks up the event and it’s time to process it.

Red Hat Fuse is an integration platform based on Apache Camel. It facilitates the integration of multiple services and components of this solution. In this case, it integrates with the cloud-based service ServiceNow and creates a ticket as soon as the event is detected.

As part of processing the event, Fuse leverages Red Hat Decision Manager, a Drools-based middleware solution that acts as the decision maker (but not alone). Red Hat Process Automation Manager is a BPM tool that can implement more complex business workflows, and in this case, it integrates (through Fuse) with other third-party products (example: inventory databases) and/or Red Hat tools like OpenShift Data Science to figure out the remedy action.

Going back to our use case, Red Hat Decision Manager identifies the action to take, based on the problem ID just detected. In this case, it’s an Ansible playbook that will restore the deleted route for “app.”

In the next step, Dynatrace detects that the problem has been resolved and clears the issue. That information also gets posted on the AMQ message bus through the Dynatrace webhook, where Fuse picks it up using the same mechanism described earlier and updates the Service Now ticket accordingly first, then the Dynatrace comments.

This completes the cycle. We have now implemented a self healing infrastructure solution using closed-loop automation and an event-based architecture.

This solution provides a variety of capabilities such as

Here are some benefits of the solution:

To summarize, a simple implementation of this architecture, here are the steps:

As the infrastructure and business processes transform to leverage a more on-demand and self-service approach, it is important to provide Ops teams with solutions enabling proactive remediation of errors. As we implement the proposed blueprint in the context of a cloud-native environment, we will share details on how to proceed and the observed outcome.

On a similar note, read now how Self-healing infrastructure with Red Hat Insights and Ansible Automation Platform makes IT operations simpler and more reliable. It leverages similar concepts as presented in this blog, with a different implementation and context.

Another contribution showcasing how automation can facilitate and accelerate consumer, business, and mobile service delivery has been published here.

To conclude, Red Hat is committed to help the Telecommunication industry by providing the horizontal platform enabling the deployment of components such as 5G networks. Looking ahead, as we start harvesting the edge, such architecture blueprint will be dissected to be more distributed.