Back to Boston! A recap of the 2017 OpenStack Summit

This year the OpenStack® Summit returned to Boston, Massachusetts. The Summit was held the week after the annual Red Hat® Summit, which was also held in Boston. The combination of the two events, back to back, made for an intense, exciting and extremely busy few weeks.

More than 5,000 attendees and 1,000 companies were in attendance for OpenStack Summit. Visitors came from over 60 countries and could choose from more than 750 sessions.

And of course all sessions and keynotes are now easily accessible for online viewing at your own leisure.

The Summit proved to be a joyful information overload and I’d like to share with you some of my personal favorite moments.

As in previous years, the Summit kicked off its first two days with a lengthy set of keynotes. The keynote sessions highlighted a variety of companies using OpenStack in many different ways highlighting the “Costs Less, Does More" theme. GE talked about using OpenStack in healthcare for compliance and Verizon discussed their use of Red Hat OpenStack Platform for NFV and edge computing. AT&T and DirectTV showed how they are using OpenStack to deliver customers a highly interactive and customizable on demand streaming service.  Throughout the keynotes it became quite clear, to me, that OpenStack is truly moving beyond its “newcomer status” and is now solving a wider range of industry use cases than in the past.

In his keynote Red Hat’s Chief Technologist Chris Wright’s discussed Red Hat’s commitment and excitement in being part of the OpenStack community and he shared some numbers from the recent user survey. Chris also shared an important collaboration between Red Hat, Boston University and the Children's Hospital working to significantly decrease the time required to process and render 3D fetal imaging using OpenShift, GPUs and machine learning. Watch his keynote to learn more about this important research. 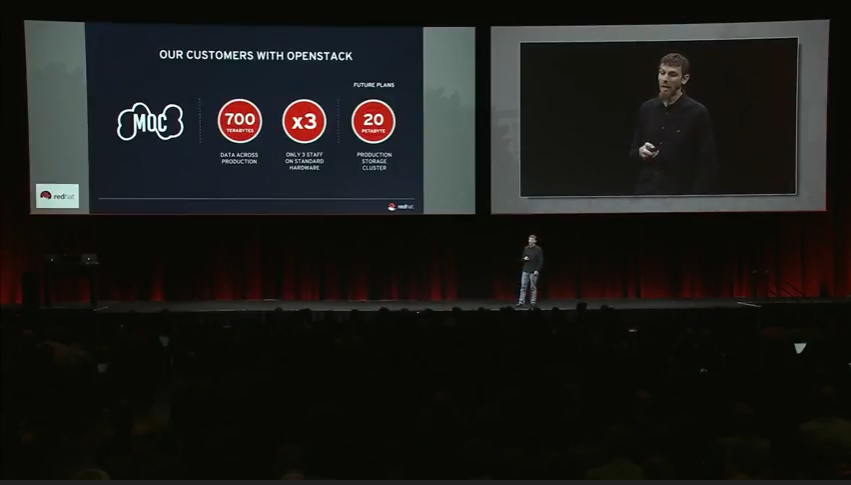 Another interesting keynote reinforcing the “Costs Less, Does More” theme was “The U.S. Army Cyber School: Saving Millions & Achieving Educational Freedom Through OpenStack” by Major Julianna Rodriguez and Captain Christopher W. Apsey. Starting just two short years ago, with almost no hardware, they now use OpenStack to enable their students to solve problems in a “warfare domain.” To do this they require instructors to react quickly to their students requirements and implement labs and solutions that reflect the ever-changing and evolving challenges they face in today’s global cyber domain. The school created an “everything as code for courseware” agile solution framework using OpenStack. Instructors can “go from idea, to code, to deployment, to classroom” in less than a day. And the school is able to do this with a significant cost savings avoiding the “legacy model of using a highly licensed and costly solution.” Both their keynote and their session talk detail very interesting and unexpected OpenStack solution. 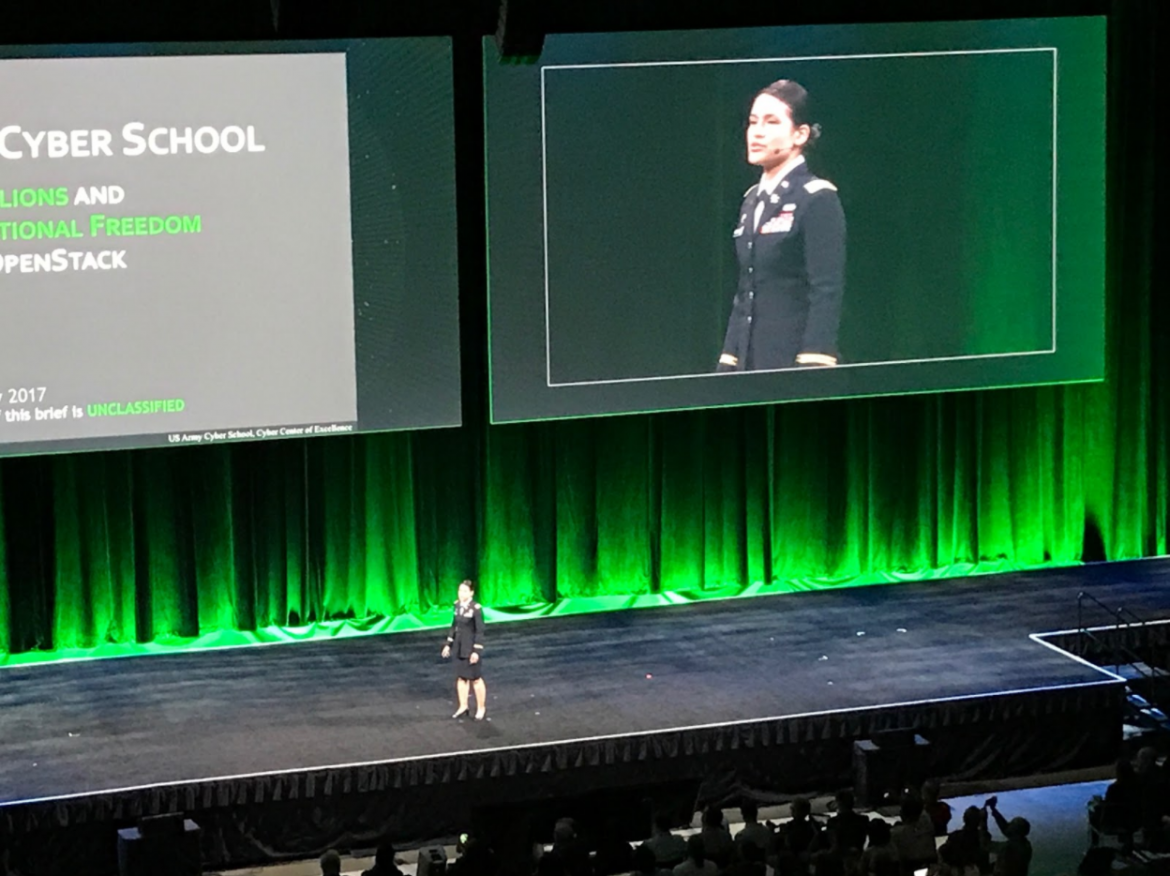 Finally, of particular note and point of pride for those of us in the Red Hat community, we were thrilled to see two of our customers using Red Hat OpenStack Platform share this year’s Superuser Award. Both Paddy Power Betfair and UKCloud transformed their businesses while also contributing back in significant ways to the OpenStack community. We at Red Hat are proud to be partnered with these great, community-minded and leading edge organizations! You can watch the announcement here.

Another recurring theme was the continuation, strength, and importance of the community behind OpenStack. Red Hat’s CEO Jim Whitehurst touched on this in his fireside chat with OpenStack Foundation Executive Director Jonathan Bryce. Jim and Jonathan discussed how OpenStack has a strong architecture and participation from vendors, users, and enterprises. Jim pointed out that having a strong community, governance structure and culture forms a context for great things to happen, suggesting, “You don’t have to worry about the roadmap; the roadmap will take care of itself.” 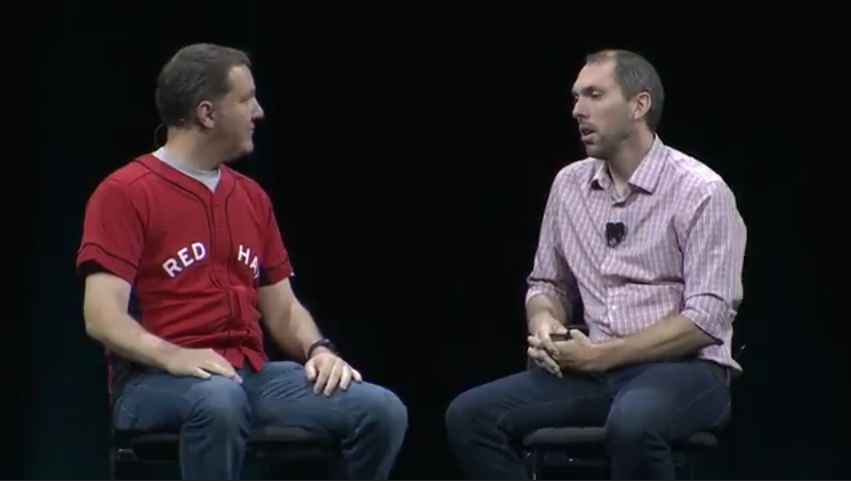 As to the state of OpenStack today, and where it is going to be in, say, five years, Jim’s thoughts really do reflect the strength of the community and the positive future of OpenStack. He noted that the OpenStack journey is unpredictable but has reacted well to the demands of the marketplace and reminded us “if you build ... the right community the right things will happen” I think it's safe to say this community remains on the right track! 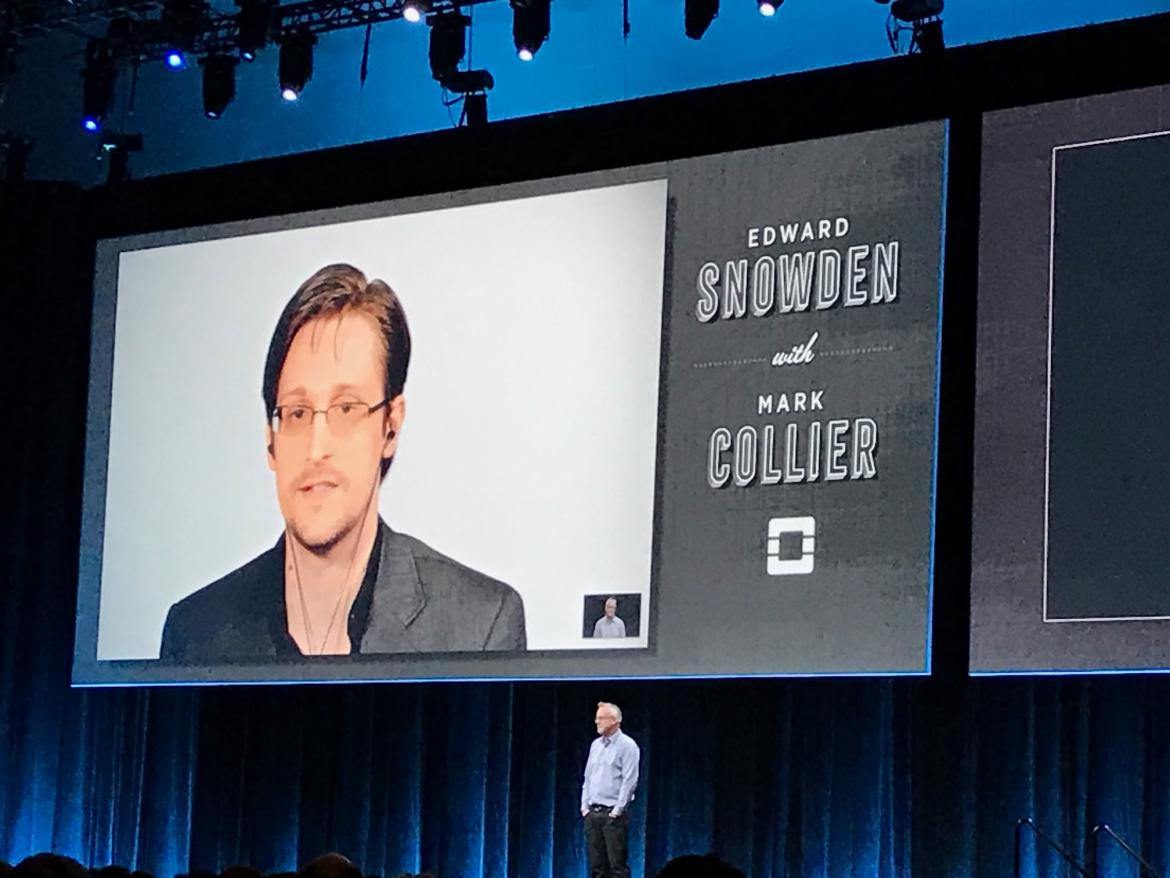 There was also a surprise guest that was teased throughout the lead up to the Summit and not revealed until many of us arrived at the venue in the morning: Edward Snowden. Snowden spoke with OpenStack Foundation COO Mark Collier in a wide ranging and interesting conversation. Topics included Snowden’s view around the importance in assuring the openness of underlying IaaS layers, warning that it is “fundamentally disempowering to sink costs into an infrastructure that you do not fully control." He also issued a poignant piece of advice to computer scientists proclaiming “this is the atomic moment for computer scientists.”

I think any community that happily embraces a keynote from both the U.S. Army Cyber School and Edward Snowden in the same 24 hour period is very indicative of an incredibly diverse, intelligent and open community and is one I'm proud to be a part of!

So many great sessions!

As mentioned, with over 750 talks there was no way to attend all of them. Between the exciting Marketplace Hall filled with awesome vendor booths, networking and giveaways, and the many events around the convention center, choosing sessions was tough. Reviewing the full list of recorded sessions reveals just how spoiled for choice we were in Boston.

Even more exciting is that with over 60 talks, Red Hat saw its highest speaker participation level of any OpenStack Summit. Red Hatters covered topics across all areas of the technology and business spectrum. Red Hat speakers ranging from engineering all the way to senior management were out in force! Here’s a short sampling of some of the sessions. 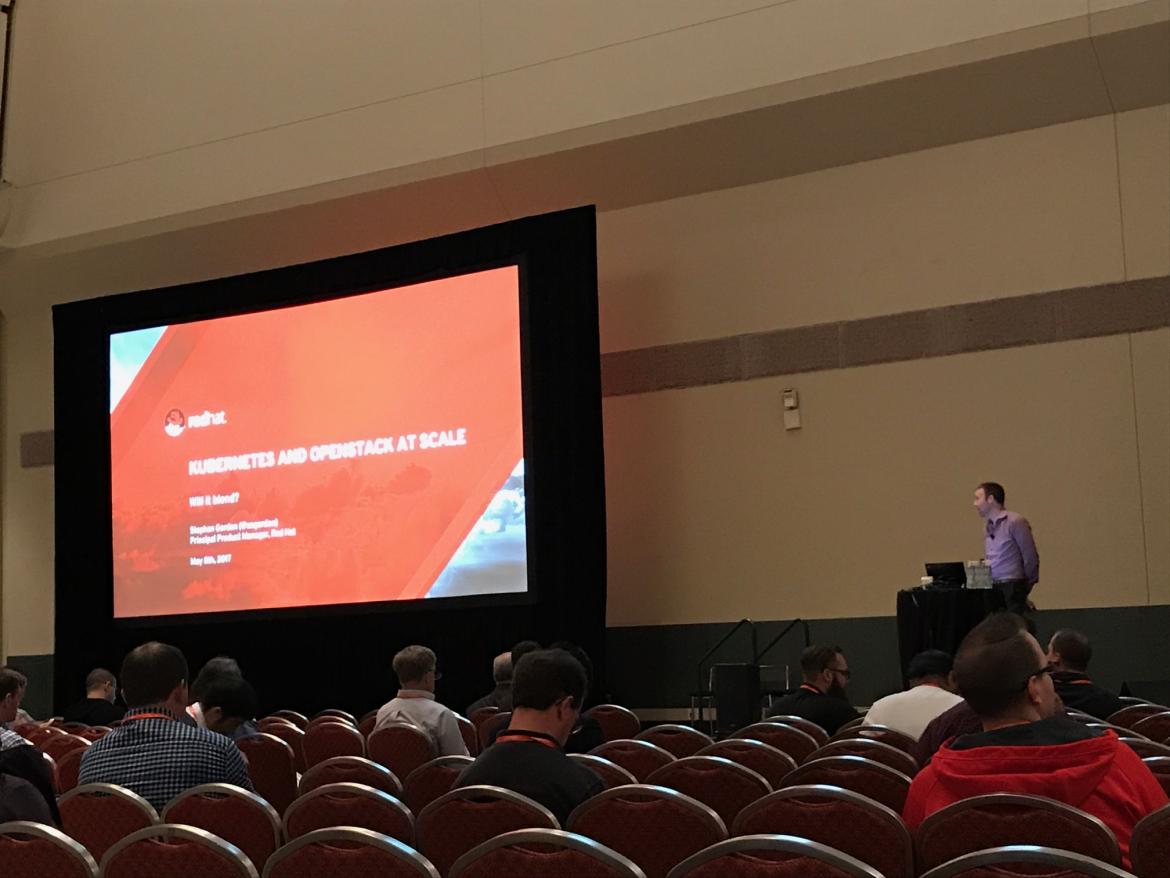 For anyone who has ever wrestled with Keystone access control, or who simply wants to better understand how it works and where it could be going, check out Adam Young, Senior Software Engineer at Red Hat and Kristi Nikolla, Software Engineer with the Massachusetts Open Cloud team at Boston University’s session entitled Per API Role Based Access Control. Adam and Kristi discuss the challenges and limitations in the current Keystone implementation around access control and present their vision of its future in what they describe as “an overview of the mechanism, the method, and the madness of RBAC in OpenStack.” Watch to the end for an interesting Q&A session. For more information on Red Hat and the Massachusetts Open Cloud, check out the case study and press release. 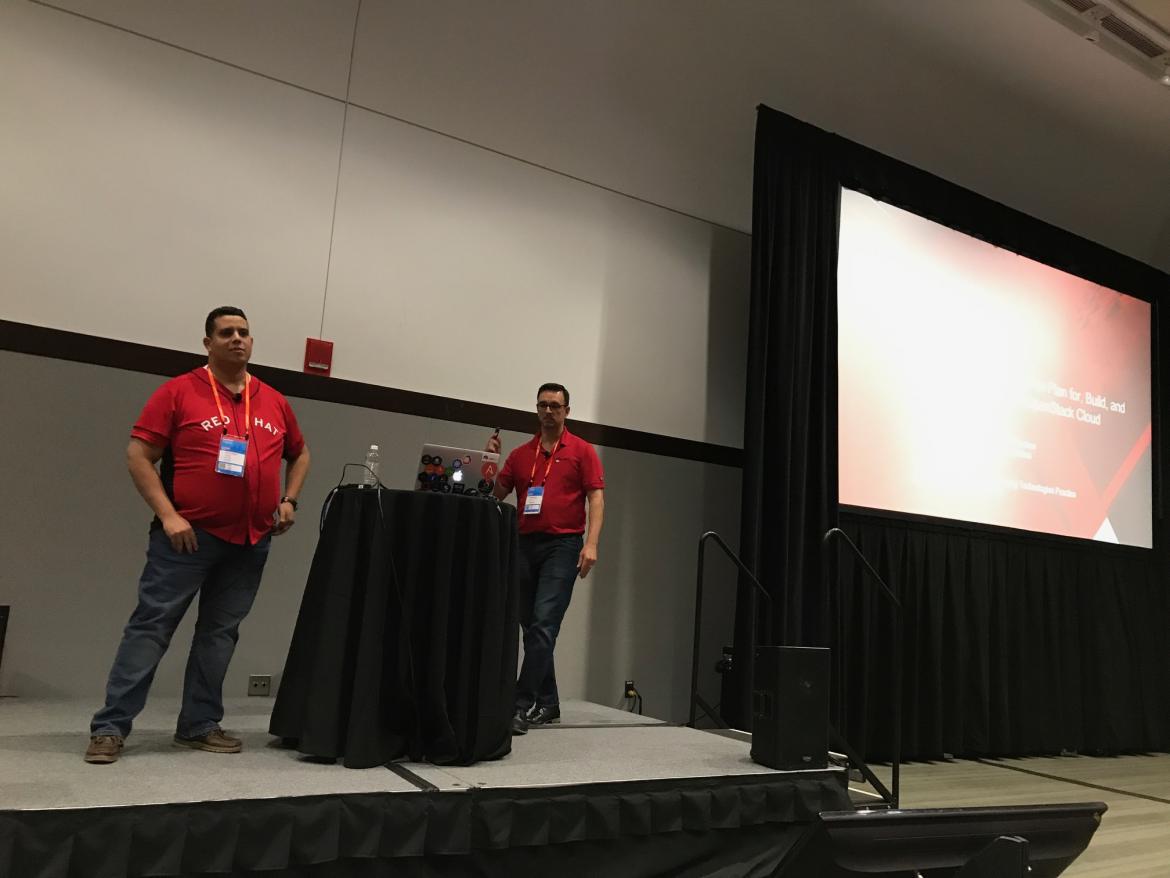 And in “Red Hat - Best practices in the Deployment of a Network Function Virtualization Infrastructure” Julio and Stephane Lefrere, Cloud Infrastructure Practice Lead, discussed the intricacies and gotchas of one of the most complicated and sophisticated deployments in the OpenStack space: NFV. Don't miss it!

Red Hat Cloud Success Architect Sadique Puthen and Senior Technical Support Engineer Jaison Raju took a deep dive into networks in Mastering in Troubleshooting NFV Issues. Digging into the intricacies and picking apart a complex NFV-based deployment would scare even the best networking professionals but Sadique and Jaison’s clear and detailed analysis, reflecting their real world customer experiences, is exceptional. I’ve been lucky enough to work with these gentleman from the field side of the business and I can tell you the level of skills present in the support organization within Red Hat is second to none. Watch the talk and see for yourself, you won’t be disappointed!

Red Hat’s Senior Director of Product Marketing Margaret Dawson, presented Red Hat - Cloud in the Era of Hybrid-Washing: What's Real & What's Not?. Margaret’s session digs into the real-world decision making processes required to make the Digital Transformation journey a success. She highlights that “Hybrid Cloud” is not simply two clouds working together but rather a detailed and complex understanding and execution of shared processes across multiple environments.

As you can see, there was no shortage of Red Hat talent speaking at this year’s Summit.

To learn more about how Red Hat can help you in your Digital Transformation journey check out the full “Don’t Fail at Scale” Webinar!

See you in six months in Sydney!

Each year the OpenStack Summit seems to get bigger and better. But this year I really felt it was the beginning of a significant change. The community is clearly ready to move to the next level of OpenStack to meet the increasingly detailed enterprise demands. And with strong initiatives from the Foundation around key areas such as addressing complexity, growing the community through leadership and mentoring programs, and ensuring a strong commitment to diversity, the future is bright. 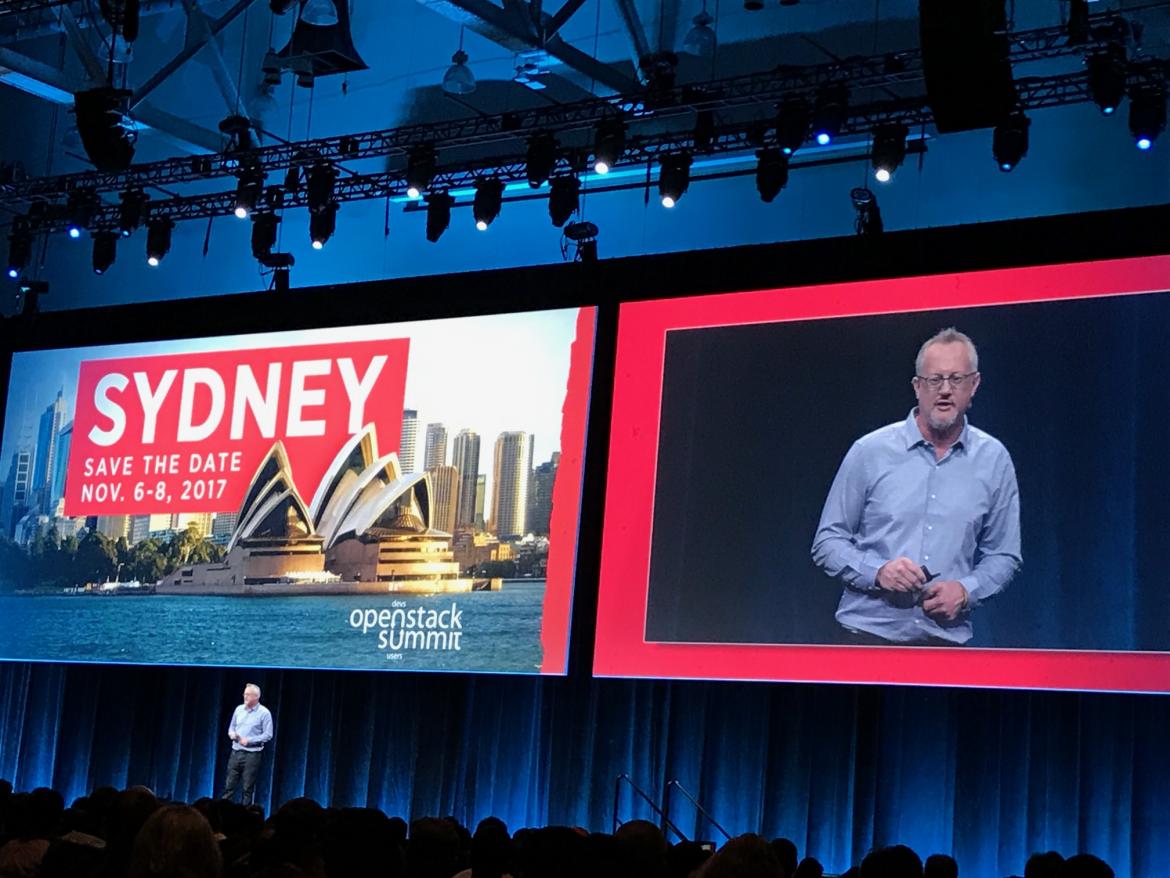 I’m really excited to see this progress showcased at the next Summit, being held in beautiful Sydney, Australia, November 6-8, 2017! Hope to see you there.

As Jim Whitehurst pointed out in his keynote, having a strong community, governance structure and culture really is propelling OpenStack into the future!

The next few years are going to be really, really exciting!