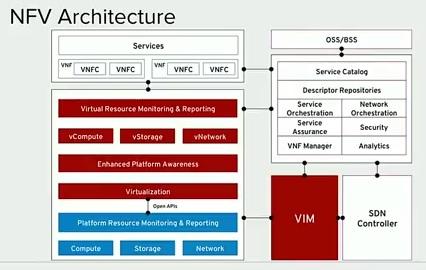 Lefrere pointed to legacy infrastructure as a key reason that NFV adoption is on the rise. There are a lot of legacy systems out there representing hundreds of millions of dollars in investment, he says, and the lack of flexibility and the obligation of IT consumers to go through the network team to set rules is the old way of doing things. “Lack of flexibility is an impediment for businesses to respond to the demand,” continued Lefrere.

Lefrere provided an overview of what NFV architecture looks like, saying, “the idea with this OpenStack platform is to be able to manage your compute, resource, networks, storage and have that as the base platform for innovation on the VNF side.”

Another crucial part of NFV deployment is the software-defined network (SDN). In fact, according to Villarreal-Pelegrino, “the SDN conversation is probably the most important conversation you’re going to have when you are onboarding OpenStack as an NFV in your company, because everything that’s in there will be dependent on that SDN choice.”

Villarreal-Pelegrino covered monitoring and troubleshooting tools, reviewing Open Source options like Elasticsearch, Fluentd, Kibana and Nagios as well as integration with existing tools like SNMP and syslog. He also reviewed use cases and stated the importance of linking your use case to the solution. “Do not adopt OpenStack because it’s the cool, trendy thing,” he says. “Adopt OpenStack because you actually have a use case that you can fix and match it with OpenStack.”

Considering the three areas of compute, networking and storage, the presenters reviewed Red Hat OpenStack Platform’s NFV features and highlighted Red Hat Ceph Storage, which is bundled with Red Hat OpenStack Platform and offers complete storage for OpenStack. They also provided an overview of Red Hat CloudForms, “which is crucial in our approach to manage OpenStack,” said Villarreal-Pelegrino. The presenters touched on automation, with a focus on Ansible’s simple, powerful and agentless solution, and then put all of the pieces together for a review of a full stack use case that’s ready for deployment.