Managing files with the Linux terminal

Working on the command line is a quick alternative to clicking through filesystem management tasks. Here are some basics to get you started.

If you're familiar with navigating your computer in a Linux terminal, then you already know how efficient a terminal can be. Instead of eight clicks to get to a subdirectory of a subdirectory in a directory, you can type one command and all but teleport straight to your destination.

For those who want to polish their skills, or are hesitant to let go of their GUI, this article demonstrates how to manage and interact with files from your terminal. Unlike traditional tutorials that focus on teaching you commands, this article takes a task-based approach, teaching you how to do ordinary things and providing you with the relevant commands as you go.

It’s helpful to have files to manage as you follow along. There are plenty of files already on your system, but many of them are important and best left out of practice sessions. Instead, you can create your own test files.

The echo command is a simple program that echoes whatever argument you provide. For example:

You can leverage shell redirects (>) to send the output of nearly any command (echo included) into a file. The first version of the redirects below overwrites any content currently in a file, while the second appends new content to the end of the file. If the redirect file doesn’t exist, the shell creates it. Try this:

With the file hello.txt now located in your Documents folder, open it in a text editor to see the results. The file contains two lines, reflecting your echo statements.

Generally, it's safer to use two redirects as done above, instead of just one, since one redirect overwrites content. For example, the following does something different than the previous series of commands:

Open the world.txt file in a text editor to see the result. 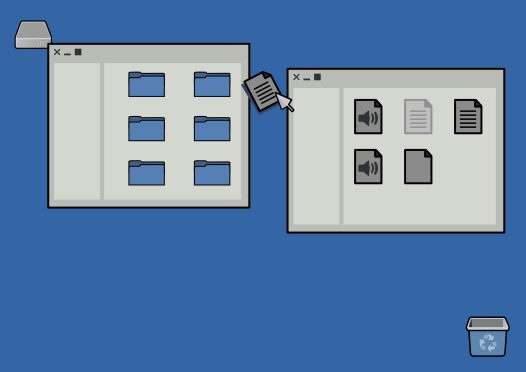 At the command line, the mv command moves a file from one place to another.

Suppose you downloaded a Git cheatsheet using a web browser. The typical default location for downloads is, understandably, your ~/Downloads folder—the ~ refers to the account you're currently logged into's home directory. The following example shows how you to move this file from ~/Downloads to your collection of cheat sheets at ~/Documents/Cheatsheets:

When using filesystem commands, you can use absolute (exactly where to operate in the filesystem) file paths or relative file paths (where to operate in the filesystem relative to where you are.) For example, if you're moving a file from ~/Downloads to ~/Documents/cheatsheet while your terminal prompt is inside ~/Documents/cheatsheet, you can use the relative notation since it's shorter. To do so, use a dot (.) to indicate that the file should move to wherever your terminal prompt is currently located, as shown below:

By default, the mv command does not ask whether you want to overwrite a file with the same name as the one you are moving. To protect yourself from this, use mv --interactive (or mv -i), which forces mv to request permission before overwriting an existing file that has the same name as this new one. 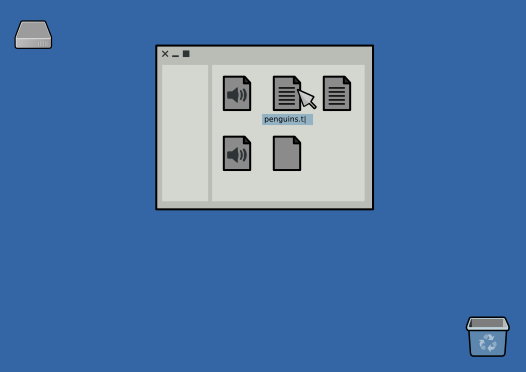 In a GUI, open a window and find the file you want to rename. Click on the file's name or right-click on it to select the rename option. Enter a new name.

At the command line, the mv command also "moves" a file from itself to itself, with a new name.

One way to rename a file in Linux is by using the  mv command, which can "move" a file from itself to itself, but with a new name. For example:

Because both renaming and moving use the same command, you can actually combine them into one action. To move a file from one folder to another, and also rename it in the process, provide the new file name in your move command like so: 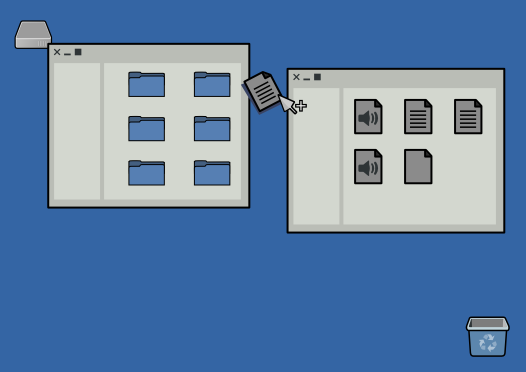 In a GUI, open a series of windows to find the file you want to copy, then open a second window to reach the new destination. Press a modifier key and drag a file from one window to another.

At the command line, the cp command makes a copy of a file and its contents.

The cp command works exactly like mv, except that it duplicates the file's contents instead of moving the file from one location to another. For example:

As with the mv command, the cp command by default overwrites any document with the same name in the destination folder. To avoid that behavior, use cp --interactive (or cp -i) like this:

To copy a file into the same directory, give it a new name during the copy operation. For example:

Try copying some of the files you've created for this exercise, and renaming them as needed. If you want your shell to provide you with feedback, add the --verbose (or -v) option to your command.

Folders don't really exist in the Linux filesystem, at least not in the way you imagine them. A folder is just a directory listing of all the files it "contains." To copy a folder, use cp --recursive (or cp -r), which copies all of the files in a folder as well as the folder designation itself. Here's an example: 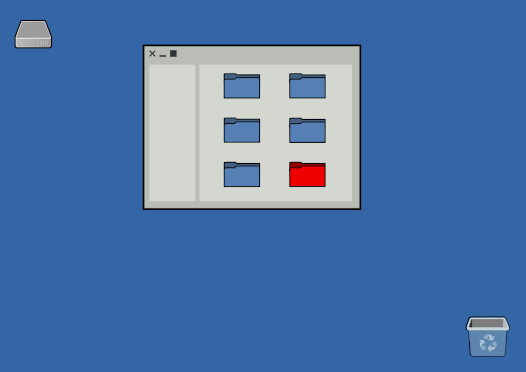 In a GUI, open a series of windows to reach the new folder's location, then click a button or menu to create a new folder. Create a folder anywhere in your file system with the mkdir command.

At the command line, to create a folder anywhere in your file system, use the mkdir (make directory) command. You can create a folder in your current filesystem location just by providing a name. For example:

You can create a folder in any other filesystem location by specifying the where it should go using an absolute or relative file path. This example uses the absolute path: 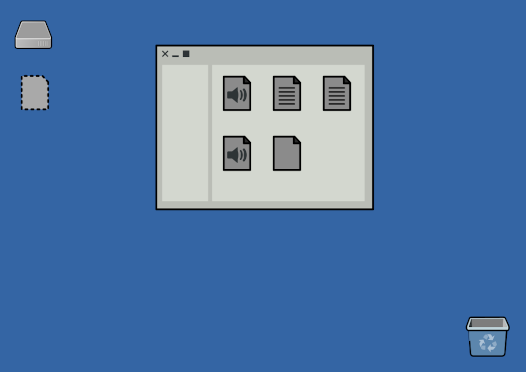 In a GUI, find a file you need a shortcut to and select the option to create a shortcut (or link or alias, depending on the OS) from a contextual menu.

The command line has even more to offer here. One of the most powerful features computers offer is the ability to have a file or folder in more than one place at once. If you make two copies of a paper file or folder, you're in danger of making changes to one and forgetting to make the same change to the other. This issue isn't a problem with symbolic linking (symlink for short) in Linux. To create a shortcut, use the ln command as you see below (you can use ln -s instead of ln --symbolic):

Should you forget which file is a symlink and which is the actual file, use the file command. For example:

To identify symlinks at a glance, you can invent your own convention, such as a naming scheme for symbolic links that includes the word link, as in this example:

Switching to the Linux command line to manage your filesystem can take some getting used to, but it's worth the effort. The further you dig into the command line's capabilities—especially when dealing with your filesystem—the faster you'll get things done. Start by practicing these basic techniques, and then dig deeper.